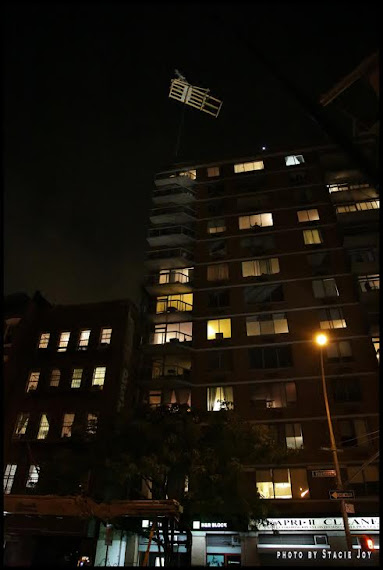 Last September, workers removed the familiar 18-foot statue of Lenin from atop the recently sold Red Square on East Houston between Avenue A and Avenue B.

That statue was said to rise again one day on a Norfolk Street building a 1/2 block from Red Square. Michael Rosen and Michael Shaoul, co-owners/developers of the original Red Square, are reportedly the owners of this 6-story walk-up adjacent to the Angel Orensanz Center.

Early this afternoon, EVG correspondent Steven came upon a crew on Norfolk Street, and ran into construction manager Peter Marciano.

The statue had been on the roof since September, and workers were putting it into place today... 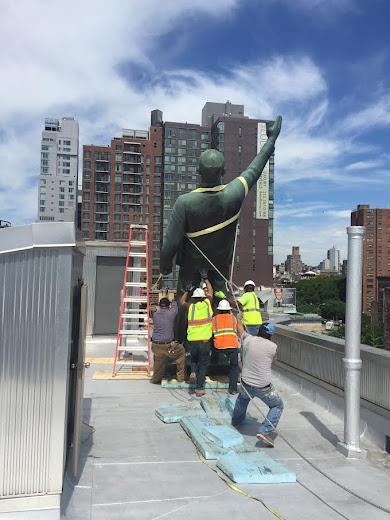 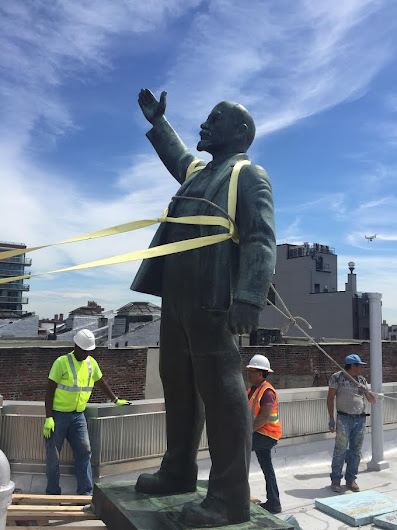 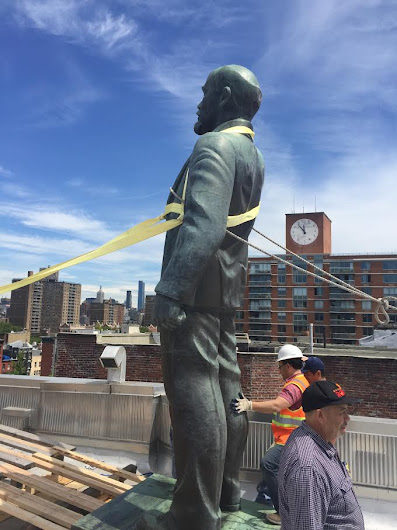 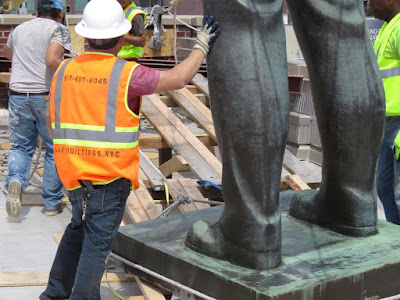 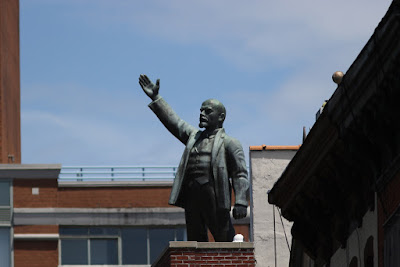 EVG correspondent Stacie Joy also happened to be at the scene... 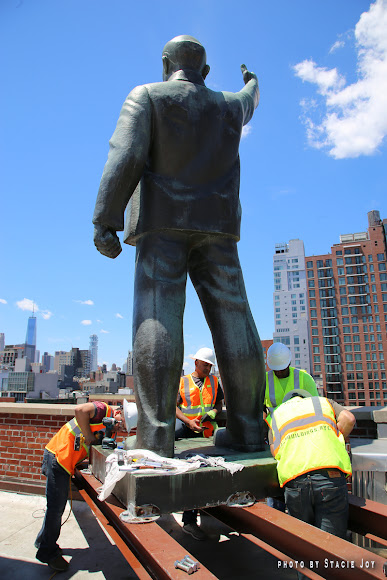 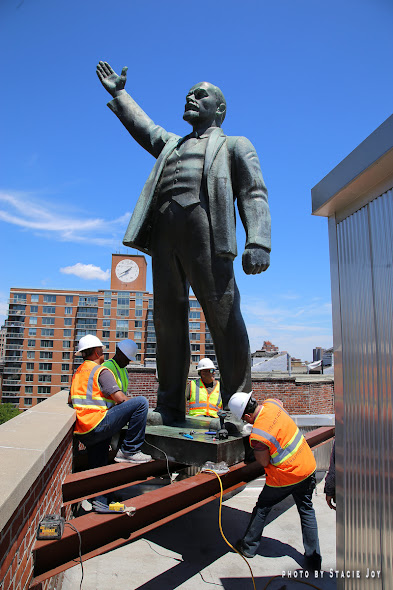 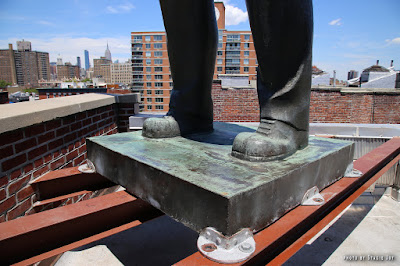 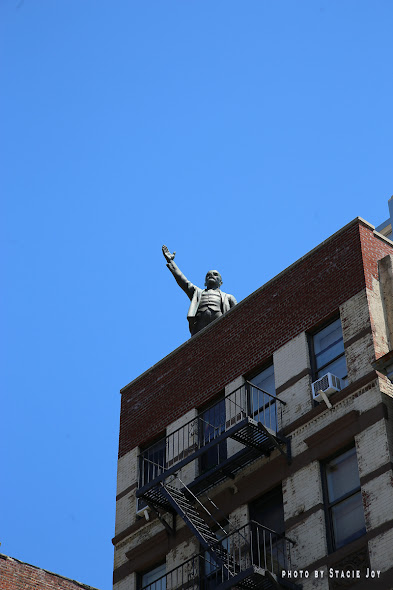 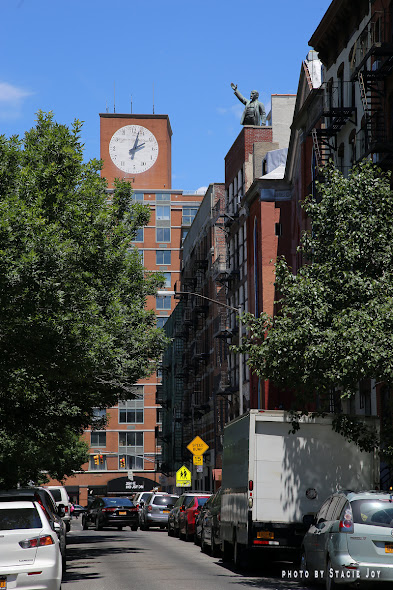 The statue arrived atop Red Square in 1994.

The fall of Lenin: Iconic statue removed from Red Square on East Houston Street
Posted by Grieve at 3:19 PM

Email ThisBlogThis!Share to TwitterShare to FacebookShare to Pinterest
Labels: Lenin

Well, I have to confess when this originally went up in the 90s I took it as a marketing ploy of gentrifying, capitalist developers – a perversion of the symbolism of Lenin. Never would I have dreamed that one day the same statue, owned by the same developers, would become a defiant icon of what’s left of small scale individuality in the LES. At its original appearance, it certainly served as a foreshadowing of the now-common, developer-funded murals that misrepresent the anarchical artistic freedom of old.

Put him on the lawn of Gracie mansion, Lenin and the current occupant are two peas in the same pod anyway.

Ironic, these guys who support communism made a shit ton of money through capitalism

They have a gold-plated statue just like that in Trump Tower.

I have to admit it, it looks cooler in the new location. To me, Lenin looks like he is gesturing about the East Village Division of New New York

"LOOK WHAT THIS SHIT HAS BECOME!"

The most powerful advisor to the President is a self-confessed Leninist and this is the best comment you can come up with? I'm confused, is DeBlasio a sell-out to corporate interest or a Marxist?

All hail to our rich and heroic real estate developers who have created an upscale white people's utopia on the LES. I take back everything I ever said about these two Leninist community leaders. Contrary to what Jerry the Peddler, David Peel and I said they are not Yuppie Scum and I wish they live long and get richer and drive all the rest of the people out of the area who are not white and wealthy.

@8:56 PM. Comrade Di Blasio is a big gub'ment loving libster and a career net-tax consuming New Class parasite. Has he ever earned a dime that didn't come from a tax payer?

whatever it's meant to be it's clear that's it's meaning is open to anyone's interpretation , love the real estate developers or hate them it strikes me that these guys are different then the current scourge of developers that plague the entire city. Make it mean what you want but they should landmark that statue, stuck in time

Presumably the status is meant to be "ironic" or "funny".

Perhaps let's add statues of Stalin, Mao, Hitler, and Putin as well then.

"I'm confused, is DeBlasio a sell-out to corporate interest or a Marxist?"

You're confused because you think those things are mutually exclusive, in spite of all the fucking obvious history to the contrary, comrade.

They are mutually exclusive. Politically ideology isn't religion, you don't get to self identify. Conduct determines membership.

Sad to see the resurrection of a statute and tribute to a mass murderer, and perhaps sadder to see the ignorant joyfulness for something which people in Eastern Europe and all over the world won the right to tear down only after much blood and oppression. This is made all the more ironic by the fact that the neighborhood was a refuge for Jewish and Ukrainian refugees of Stalin's tyranny. For shame.