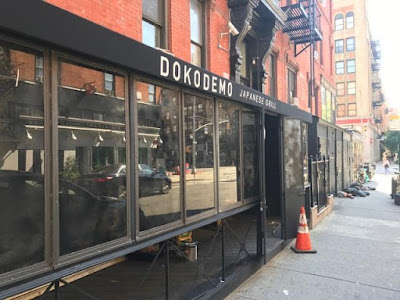 Here's more on the place via the restaurant's website:

Okonomiyaki, is among the most popular foods in Japan. Visitors to Japan are often pleasantly surprised to disover the variety of bistro-style foods on offer in Japan. Ramen, Onigiri, Tempura, and Okonomiyaki are often discovered and beloved by travelers on their first visit to Japan.
​
DOKODEMO specializes in Okonomiyaki, Takoyaki, and Yakisoba. We combine fresh local produce with specialty sourced ingredients imported directly from Japan to provide a uniquely authentic, casual Japanese dining experience.
​
Restauranteurs Shin Takagi and Kazu Kamehara have over thirty years of experience operating restaurants in Japan but DOKODEMO is a passion project conceived after many visits to New York in which the two were blown away by the culinary variety of the city. DOKODEMO is their first restaurant outside Asia.

This space used to be part of Cucina di Pesce at 87 E. Fourth St. As we reported in May 2016, Cucina di Pesce gave up this room next door at No. 89, which belonged to a different landlord. Cucina di Pesce remains open in a slightly smaller space these days.

Thanks to EVG reader Roxanne Schwartz for the photo!
Posted by Grieve at 4:15 AM

When is Dokodemo expected to open?