More dessert choices for Avenue A as Eggloo opens this weekend 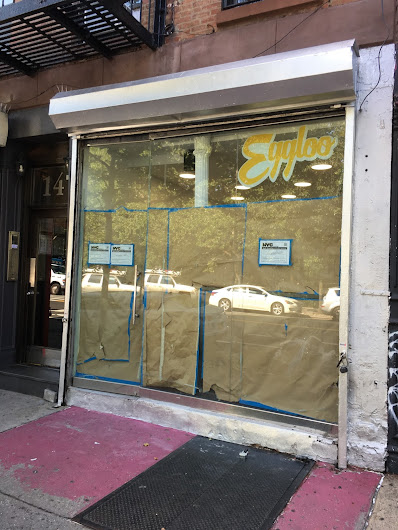 Eggloo, which specializes in Hong Kong egg waffles and ice cream sandwiches, is opening this weekend at 147 Avenue A between Ninth Street and 10th Street. (H/T B+B)

This will be Eggloo's second NYC location. They opened on Mulberry Street in February 2016. And as amNew York reported at the time: "Teenagers out of school for the holiday crowded the narrow entryway, blaring Taylor Swift, and eagerly ordered matcha waffles griddled to order, stuffed with a plush scoop of homemade strawberry ice cream, topped with mochi, colorful cereal and more."

Eggloo will be just one storefront away from another new dessert place — Gelarto.

Other nearby dessert places opening soon are Becky's Bites, the cream cheese shop on Seventh Street, and Stuffed Ice Cream on First Avenue. That Stuffed signage arrived on Monday... 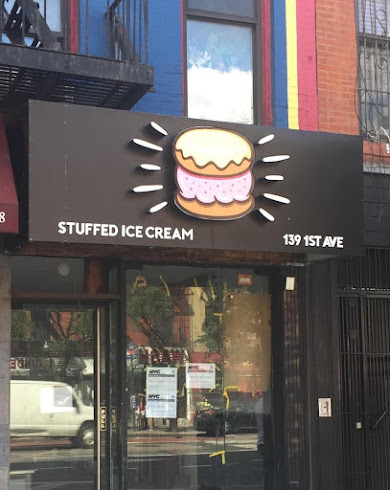 As for 147 Avenue A, the storefront in prison-bound landlord Steve Croman's building has been vacant for the past two years. La Lucha closed here after six years in business, citing "the outrageous cost of operating in the village."

I'm sick already, and summer isn't even over.

Here's a pro tip. You can buy ice cream at the grocery store, for like 1/4 the price. You know what else? They usually sell cones too. Now you are probably thinking "Yeah, but I'm not a professional scooper". Let me tell you, scooping ice cream is not a specialized skill, like say, cooking barbeque, or rolling up sushi. Another thing, the ice cream you get in these speciality shops, is frozen solid just like it is at the store. Not like it's made fresh to order or something.

"Teenagers out of school for the holiday crowded the narrow entryway, blaring Taylor Swift,"
Ha! Sorry, those were college graduates. Trust me.

What is that disgusting looking green thing surrounded by sprinkles?

First the froyos, now this. I'll only patronize this if they serve this on a hoof!