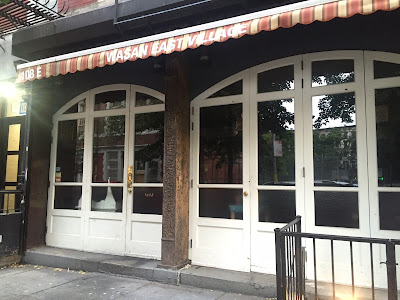 An EVG reader shares this photo, noting that Wasan East Village has closed on 4th Street between First Avenue and Second Avenue. Per the reader: "Restaurant's dark and the phone is out. Yelp and Open Table say permanently closed. Ugh."

The Japanese restaurant opened here in 2010. Wasan opened an outpost on Bergen Street at Fifth Avenue in Park Slope two years ago.
Posted by Grieve at 4:03 AM

Email ThisBlogThis!Share to TwitterShare to FacebookShare to Pinterest
Labels: restaurants that are now closed, Wasan

It has gotten to the point where things close that I never even knew were open in the first place...

This is a huge bummer. Loved this place. Their Uni lover's appetizer was one of the best things in the village.

This sucks. It is the high rent that probably drove this business away like countless others.

NYC, in general, with the EV in particular is becoming unsustainable and too expensive. The prices here are ridiculous. No wonder businesses are shutting down or that friends of mine are moving out or being evicted when they simply can't stay on top of the staggering expense. Even with two jobs, they can't afford to subsist. And it will take a lot of food sales to pay rent if you are a business owner. But how can the rent be paid if people can't afford to dine out like they used to?

And Landlords. Many are becoming greedy. Too bad about this Wasan. :( Great food.

NYC is almost becoming a place where it just isn't worth to be here unless you are pulling over a mid to six figure salary. Tell me, where are those jobs????