Nearly one year has passed since workers were spotted clearing out the long-empty storefront at 84 Second Ave. between Fifth Street and Fourth Street.

A worker said that Betty Sopolsky, the owner, had recently moved away around the same time as an LLC with a Hempstead, N.Y., address bought the building for $5.125 million, per public records. (A few EVG readers said that she was estranged from her family, and only a niece remained.)

Now, in the last few days, retail for rent signs arrived on the building (thanks to Goggla for the photos!)... 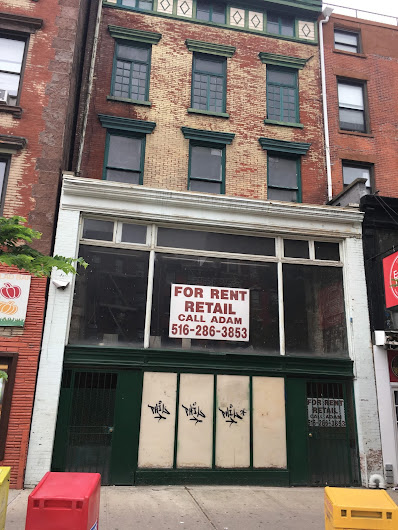 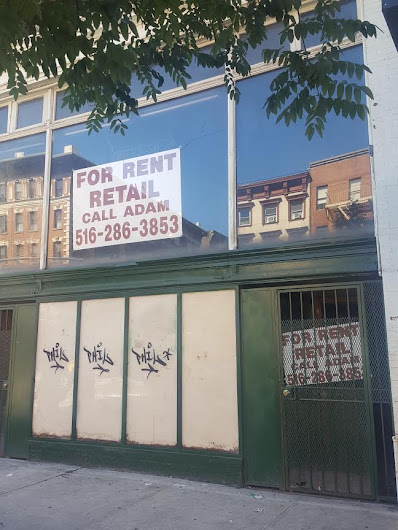 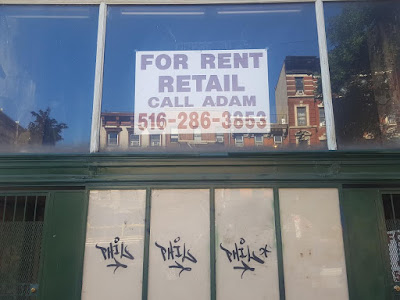 As previously noted, there have been several deaths inside this house. This is from The New York Times, dated Jan. 18, 1974:

The nude body of a 40-year-old woman propietor of a tailor shop that rents tuxedos on the Lower East Side was found bludgeoned to death. The victim was Helen Sopolsky of 84 Second Avenue, near fifth Street, whose shop is one flight up at that address. The motive of the attack was not determined immediately....

As far as some longtime residents can remember, the storefront has remained empty since Helen's death. The perceived lack of activity inside the building along with the preserved window display on the second level was long a source of mystery.

Here's Jeremiah Moss writing about it in 2011:

It seems the shop has stayed virtually frozen in time since that terrible moment. The dinner jacket, never hired out to a party, is white beneath its dusty plastic, and the shirt and tie are the orange sherbet color of baby aspirin. Above hangs a crooked neon sign announcing DRESS SUITS TO HIRE. The ITS in SUITS is broken and dangling. 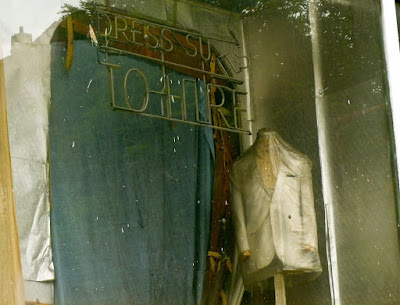 For now the only mystery here will be with who arrives as the new retail tenant.
Posted by Grieve at 4:28 AM

A friend of mine lived in that building in the very early 80s. She sadly hanged herself in her apartment. Bad Feng shui at that location.

Although ghosts make a ton of noise with their incessant moaning, they have a remarkable worth ethic and zero rights when it comes to labor laws.

This quiet oddity went unnoticed by most pedestrians yet staring into the windows always reminded me of the scene from "Omega Man' when Charlton Heston enters a department store in post apocalyptic Los Angeles.

A few months ago, the second floor was cleared out and the dividing wall removed. You can now see through the front window through to the back. The ground floor seems to have been quickly swept out. The front door has either been removed or left open and you can see up the stairs from the street. It looks to be a mess inside. I'd love to know what the rest of the place looks like.

I've been obsessed with that building for years!! That one and the bean building while it was empty... Dreams dreams..

Oh the pictures that could be taken....fascinating!!

i was nearby on Mother's day when the fire department showed up there. i watched as they were unable to get in - which was a bit surprising. no smoke. eventually they left.

I met Betty a while back, when she had the notion of selling stuff in front on Sundays afternoons. She was remarkable in a few ways, and consistently surprised me. She asked if I'd help re-tar the roof with her, and I spent a very strange day clambering around inside of what felt like a tomb, surrounded by containers set out to catch the dripping water. The suits were still there, on built-in wooden displays like you might see in an old French apothecary. I spoke a bit with her about helping rent out the ground floor to a business in order to bring in some extra money, but I guess the unending stream of cash purchase offers along with family feuds made her more than a little skeptical about anyone knowing her business. If I recall correctly, she said she grew up in the building next door, so until that point had basically only ever lived on that single block.

NOTORIOUS made me laugh.

I am still angry at myself for never taking a photo of the DRESS SUITS TO HIRE sign and creepy mannequin. I suppose I thought there would always be time. STUPID. I read Jeremiah Moss and everything.

Can never have enough info on this haunted place.

this place has memories ~ Passing with my mom, I was in 4th grade, many moons ago, we would walk around the E.V and I remember the 2nd floor and loving that window.

So is Betty Helen's daughter? Was the building left to her? Anyone know?

Betty was not Helen's daughter - she was her sister. Her parents bought the place sometime in the late 1920's from my grandmother who owned the building and had a millinery shop on the first floor and rented out the second floor Tux shop. You can still see part of my grandmother's name in the tiles - Matilda.

My father was born in the building as well. The windows haven't been changed since the 1920's - my grandmother put in the French windows.

I always wanted to see inside but Betty wouldn't let anyone in. She lived like a recluse in there for years without electricity. She had two brothers but they must be deceased now.

Would love to be able to see it now and wander through the inside of that building. It has so much history for me!