Loverboy bringing pizza and cocktails to 8th and C 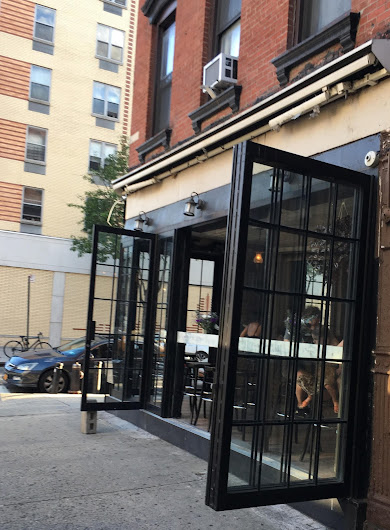 The new pizzeria/cocktail lounge is now up and running at the northwest corner of Avenue C and Eighth Street.

The place is called Loverboy, and is run by T.J. Lynch, who operates Mother’s Ruin on Spring Street between Elizabeth and Mott. (A place apparently known for "booze-filled slushies.")

Loverboy made PUNCH's list of "The Most Notable New Bars in America, Spring/Summer 2017." Per PUNCH: "Lynch expands his wildly successful formula at Mother’s Ruin east of Bowery. And who can argue with the addition of pizza? Expect his high-low style and love of frozen cocktails to be on full display."

Anyway, Loverboy is now open and serving drinks. Pizzas will arrive once Con Ed turns on the gas, according to East Village Eats.

As previously noted, this corner space has been home to Lumé, the "Epicurean drinkery," ... Life — Kitchen and Bar … which had taken over for Verso. Other restaurants here in the past seven years include Caffe Pepe Rosso and Caffe Cotto.

Previously on EV Grieve:
Pizzeria proposed for the corner of Avenue C and East 8th Street

God forbid they wait until AFTER Con Ed turns the gas on to open, so they could serve food from the get-go. Nah, more important to get the booze flowing. Or slushing. Whatever. Just more kiddie krap.

Another excuse for a SLUSSHY BAR,let's face it ,this joint ain't about the Pizza, Hope they Fail,but will probably be a huge Suckcess!
All you can Drink SLUSSHY pizza BRUNCH,Anyone's??Damn

Who needs pizza anyway when a great neighborhood dollar one is a block away? Thanks CB3. We've been duped yet again.

I think I will try the place before condemning it in the comments section of a blog. Perhaps it will be a nice neighborhood spot.

Have been to Mother's Ruin a few times in Nolita and it's really more of a craft cocktail / yuppie haunt than the college kiddie vibe that "booze-filled slushies" gives off... yep, they have one slushy machine, but it's mostly a nostalgic "ironic" thing rather than the main event.

That said... Mother's Ruin is absolutely deafening at peak hours, with no help from the tin ceiling. Hopefully they'll think about the acoustics with this new venture.

Okay all the signs of a neighborhood disaster are here. Open facade for starters means loud music and loud voices blaring day and night. (I wish the city would ban open front restaurants and bars). The spot in Nolita may be for yuppies but this place will be for the younger and more drunken frat and sorority customers. I'm sure the Pizza was a ruse to get a liquor licenses, waiting for ConEd to turn on the gas, lol. The only positive thing I will add is at least the vomit on Ave C will be red to pink depending on the variety of pizza their customers wolf down.

right across the street from a police station will "ruin" the mother's ruin vibe here...

Unfortunately once again, CB3 voted to deny the application of this place, but the SLA gave them the license anyway. Croman wins because he gets to keep the ungodly rent money these guys are paying for this space to sell slushies to kidults who swarm the neighborhood and provide no benefits to the community.

Went last night. Had some tasty cocktails including the slushy which they onlu had one of.

Looks like a pretty classy place with cocktails in the $12+ range. Food menu was very minimal, but most in our party had the chicken parm sandwich, which all enjoyed. Would return back.

I am the President of the Eight BCD Block Association and wish to weigh-in on this somewhat ill-informed discussion.
I have had the pleasure of getting to know the owners of Lover Boy since witnessing them pouring their sweat equity into renovating this seemingly cursed location. While they hired specialty contractors when needed, there they were, day after day, week after week, doing most of the work themselves.
As noted earlier in the blog, a great many establishments have tried -and failed- at this location. My neighbors and I would appreciate a degree of permanence and the commitment they have shown through all the work they have personally performed, gives us some much-needed comfort that they are here to stay.
More than that, they have also shown a true commitment to being involved in the community by freely offering food, drink and even their space to local community organizations.
The performance of ConEd has been particularly troubling. I am personally aware their current projection for completing the work needed is 6 months!
Still, they are trying their best to stay alive and absent any verifiable complaints about their establishment, I am willing to offer my support and ask folks to take a deep breath and give them a chance.