1st look at the Other Music documentary

The first trailer for the Other Music documentary premiered this morning... the film aspires to chronicle the 20-year history and legacy of Other Music, its influence on music in New York City and its closure last June.

The clip features a variety of musicians (Stephin Merritt of the Magnetic Fields and Daniel Kessler of Interpol, among others) and a few actors (Jason Schwartzman and ... Benicio Del Toro?!) talking about what the place meant to them as well as an array of footage from the many in-store performances through the years.

The production is still in the Kickstarter phase, with a way to go before reaching the $70,000 production goal.

The store on Fourth Street between Lafayette and Broadway closed last June 25 after 20-plus years in business. Other Music's owners cited rising rents and the changing face of the music industry as reasons behind the closure. According to The New York Times, the rent more than doubled from the $6,000 a month the store paid in 1995 while its annual share of the building’s property tax bill has also increased.

Meanwhile, someone has removed the for rent signs at the former storefront. There isn't any sign of a new tenant yet — just the brown paper on the windows... 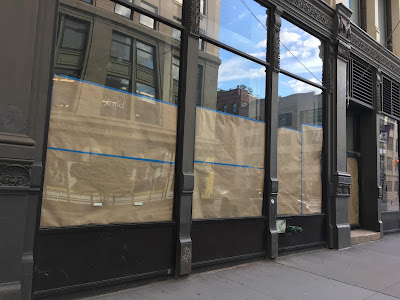 The retail listing for the space includes a bland rendering of the storefront's potential... 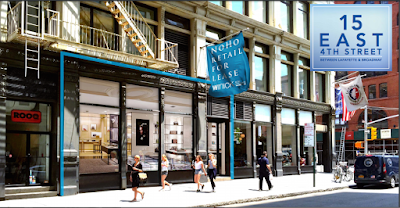 70K for a documentary about a dead record store, give me a fucking break. How 'bout open a new record store using that money?

This record store really has an overinflated sense of self-worth.

First off spare me the guy from Interpol and that they, LCD Soundsystem, The Yeah Yeah Yeahs, and The Strokes sold their first records here, they were not part of the NYC music scene, they were hyped up propped up bands who never put back into the NYC music scene they like to tout themselves as part of. They along with the monopolistic Bowery Presents (even more so after selling out to AEG Live) were the beginning of the end of underground NYC music. Music without rebellion, expression, an edge.

Second this store was for those who cared only about major and big indie label artists, collectibles, and oddities. They did everything they could to tell hardcore punk and metal bands to fuck off, don't bring your stuff to be sold here, don't post flyers of your shows here. It was unwelcoming and of course it'd be that cuz that music, that rebellion, expression, and edge didn't fit into their gentrification, homogenization, and coopting of underground music.

Other Music never supported the underground, unsigned NYC music scene, Generation Records did and still does. Generation opened before them, outlasted them, and will outlast every hipster record store in Brooklyn. Do documentary about them, a record store open for 25 years strong.

Wow. I did catch an elitist vibe at other but disagree regarding curation. For a VERY small store they had an amazing selection. Yes though...lots of "collectables" for the geeks and very snooty as far as NYHC goes.They nurtured a elitist vein of NY music, and they were very good at it.

We're getting to the point where the latest generation never even experienced what was, so they lament what they lost, never even aware that it was milk toast. I will always love hardcore punk!

Right, they were elitist. They opened up on E.4th Street and acted like my scene (really community) and NYC underground music in general didn't exist, just like all the assholes who move here not to be part of NYC but to have NYC be part of them. So fuck Other Music. Rough Trade can eat shit, too.

On a positive note, please list the record stores in the other four boroughs which carry records by current (active) underground, unsigned bands. I'll assume Staten Island, Queens, and The Bronx have no stores, and all the other stores besides Generation are in Brooklyn, but maybe (hopefully) I'm wrong.)

I want a store that specializes in Chinese films made before 1930 — filmmakers like Zhang Shichuan and Zheng Zhengqiu. None of the so-called POS "art house" theaters in NYC ever supported this scene.

@2:55 I thought you would know the list of record stores. People seem to like this one on Noll Street in Brooklyn called Material World Music and DVD.

Jason Schwartzman was drummer of Phantom Planet and has a solo project Coconut Records.

@2:55 Back again. I'm confused by your comments. If you like a particular type of music that's one thing but I've purchased music by artists that Other Music and Generation both carried. Titus Andronicus, Sharon Van Etten, Psychic Ills etc., you know. I know, Generation has a big hard core selection. I bought a lot of things there and I really like one of the fellows who works there, he's really nice. They have an Indie section, new and used too. I bought the Dinasour Jr. 1985 reissue debut there. Saint Vitus Bar shows hardcore acts and some of the artists do jazz and other as well, you know. Where do unsigned hardcore bands perform in NYC and do they live in NYC or in the region?

Meh...I love vinyl, but sorry I don't miss this place. I'm sure there's a story to tell here but a full feature length documentary?

Oh this is where members of the Cro-Mags and Agnostic Front post. Too funny.

You think Other Music is pretentious - has anyone been to the new record store in Chinatown?!?!

All those bands were marginal, bland, unrevolutionary and forgettable. (Except for the Magnetic Fields, 69 songs was a masterpiece if you can sit for 3 straight hours) I was shocked Other music was open that long, they were quite fortunate the Kim's underground stores went down earlier.

Oh and those bands were derivative as hell. Interpol-Joy Division, TV on the Radio-Nine Inch Nails then Peter Gabriel, The Strokes-a more commercial Pavement, LCD Soundsystem-New Order and the Human League with stupid lyrics (although they made good singles). The 21st century has been quite wretched and dull. The Ramones warned everybody in 1980

Phantom Planet, they did the theme for the O.C.; CalifornNIAAA HERE I COMMMMME! Blech.

Omg barf
This kind of self-righteous pretentious douchebagness is usually reserved for hipster Brooklyn bullshit.
Sad to see someone made a movie about something so unworthy

Typical bitter old EVG posters. Know what? Hardcore , punk, and 'metal' are boring and hardly 'revolutionary' at this late date. They're conservative old genres that have their own ridiculous and rigid conventions about what is and isn't acceptable. I suspect that the real beef is about a thing those "marginal" bands are that you weren't: successful.