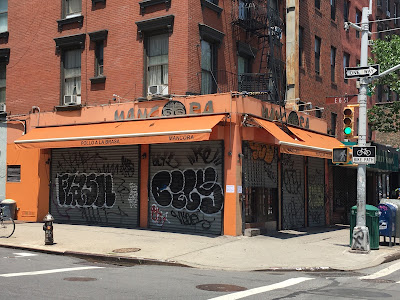 Last week, we reported that Mancora had closed... and workers had gutted the interior of the Peruvian restaurant here on Sixth Street and First Avenue.

However, over the weekend, signs arrived noting that Mancora was going to open across the street (H/T to EVG reader JP on 7th St.) ... 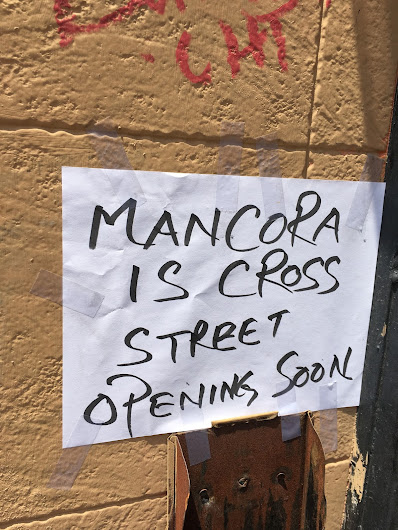 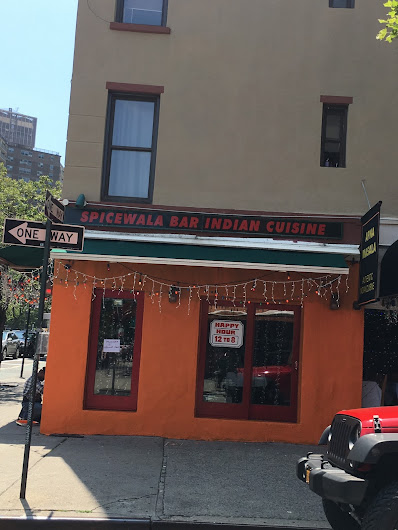 ...and there are signs at Spicewala Bar Indian Cuisine with the Mancora message... 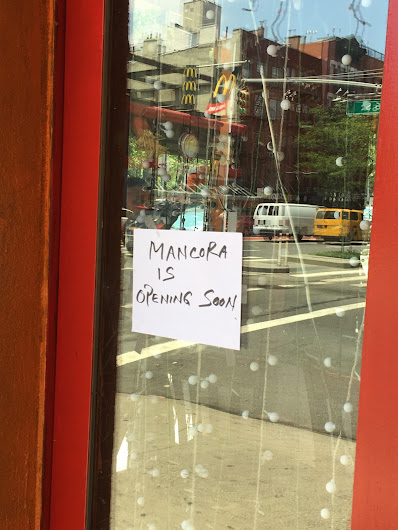 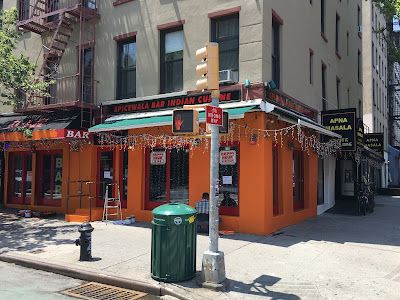 Mancora's arrival will likely stop the restaurant carousel that has been going on since Banjara moved to Second Avenue in 2013.

So after Banjara, Figaro Villaggio, an Italian bar-restaurant, opened in January 2014. They later changed the name to Figaro Cafe Bistro Bar & Grill and, by November 2014, gave up part of the space to Apna Masala. In March 2015, Figaro Cafe Bistro Bar & Grill changed its names/concepts to La Esquina Bar & Grill ... then the name evolved to La Esquina Burritos and Bar ... and eventually East Village Burritos & Bar. Then Spicewala Bar Indian Cuisine. And, soon, Mancora.
Posted by Grieve at 4:30 AM

Email ThisBlogThis!Share to TwitterShare to FacebookShare to Pinterest
Labels: Mancora

Good riddance to all of them

That's the best restaurant / real-estate story in a long time Grieve! Been lamenting Manora's closure, and that space since Banjara left has been a train wreck!

Happy to see this. I live on the block and have been nervous ever since Banjara left that this corner would fall victim to one of those dreaded celebrity bro-bar-staurant-shitshow places.

Thanks to EV Grieve for keeping up with this epic post-Banjara saga. Whoever came up with all those knockoff restaurants that were doomed to fail needs to find another line of work. You can't just slap a new name and some paint on a storefront and expect it to fly. Meanwhile the Banjara merger with Haveli on 2nd Ave. seems to be doing OK, even though the menu changed a bit, they kept many of the old Haveli favorites. Hopefully Mancora can restore the spot to its former glory.

Wow, this is the second good comeback story this week (after Ninth Ward, sorry I realize a lot of you don't like bars but that place was awesome). Ditto Mancora, I only wish the interim people hadn't ruined that great interior Banjara had.

I just heard San Loco on 2nd Avenue is closing tomorrow due to a rent increase, so another EV long timer bites the dust. It's hard to keep up with all the churn.

I did like Mancora and am glad it will replace that sad succession of post-Banjara places.