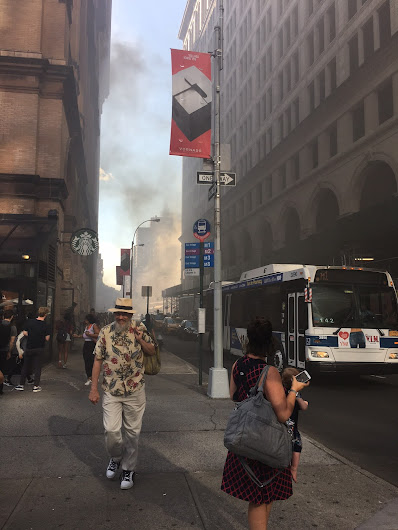 There's a report of a fire at 60 E. Ninth St., a six-floor building called The Hamilton at Broadway (the 200-plus-unit co-op sits between Ninth Street and Eighth Street)... 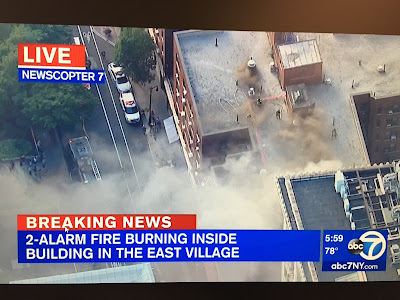 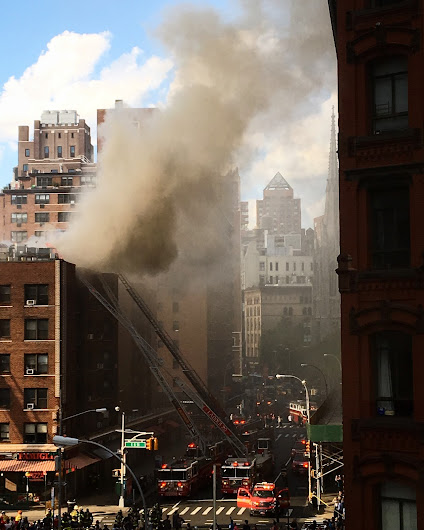 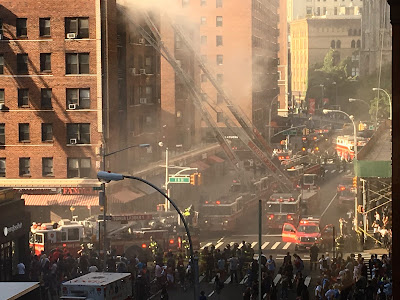 ... and the view from Astor Place via an EVG reader... 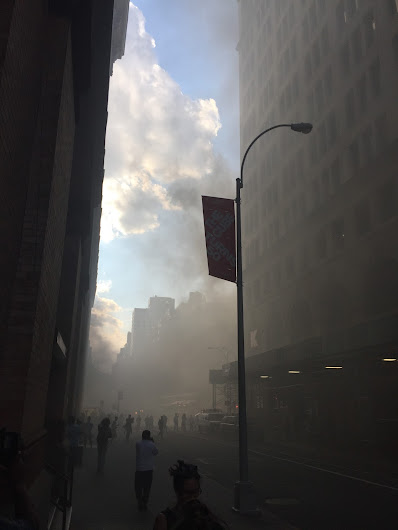 Patch reports that 200 firefighters are on the scene.

... a view north from Astor Place on Broadway via EVG reader 8E... 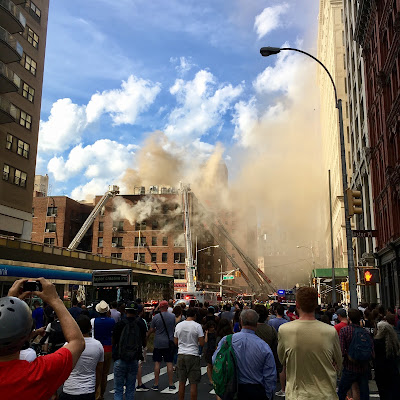 ... a view from Fourth Avenue and 10th Street via EVG reader Charlie Chen... 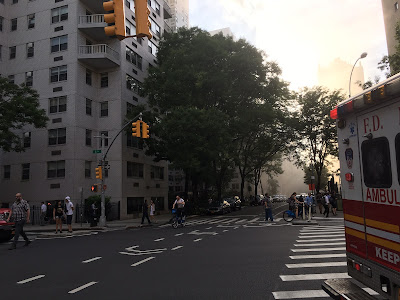 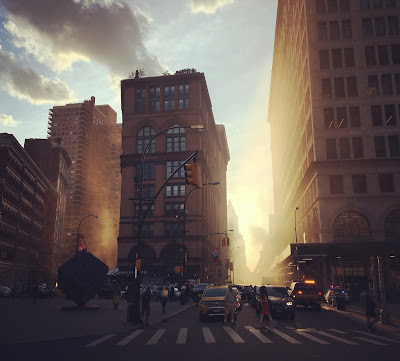 The view west on Ninth Street from Tompkins Square Park... smoke visible in the distance... photo via Steven... 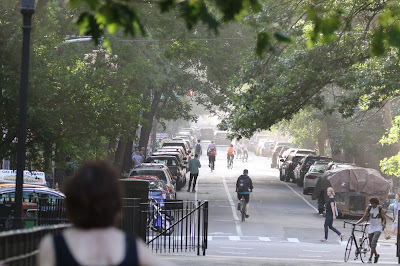 The FDNY reports that one firefighter has been injured ... still no word on cause or other injuries...

Several witnesses said that the fire appeared to intensify as time went on... the FDNY elevated the status from two to five alarms during the early evening.

The Post reports that the building's residents "were forced to gathered outside the building and watch in horror as the fire intensified Wednesday evening."

“I work on Bleecker and by the time I got to Great Jones I looked up and saw it was my building that the smoke was coming [from], the first thing I thought about was my dogs were trapped in the building,” said James Abraham, owner of the nearby Bleecker Street Bar.

“As I was tying to cross 8th street, I was stopped by someone, and they said, ‘No one is getting in the building, if you try to get in I’ll have you arrested.’ So I walked around to 9th street and went in to get my dogs.”

Fearing for the pups’ lives, Abraham navigated his way through the thick black smoke and up to his sixth floor apartment — where he found his four-legged best friends frantically waiting.

“I was very concerned and very focused,” he said. “They were a little distressed. All the noise, smoke and commotion definitely agitated them.”

The FDNY has issued an under control...

...and some play by play on how the FDNY brought it under control...

The members made a very aggressive interior attack to stop this fire - #FDNY Commissioner Daniel A. Nigro at 5-alarm fire in Manhattan pic.twitter.com/E5zMqJ0mjC

Updated 6/29 7:30 a.m.
No one in the building was hurt, but 16 firefighters suffered minor injuries, according it NBC 4.

As for the residents:

The Red Cross responded to the scene and said more than 200 households were forced from their home. Only about half of them were allowed back inside, the other half of the building remains evacuated.

Investigators reportedly believe the fire started in the kitchen cooking area of a ground-floor deli on Eighth Street and then traveled undetected up a shaft to the roof.

Details about the service change in effect on the N and R lines pic.twitter.com/ZTavPCWYkc

Here's a look this morning... the damaged appears to be contained to the Eighth Street side... there's still a heavy FDNY presence on the scene... along with the Red Cross... 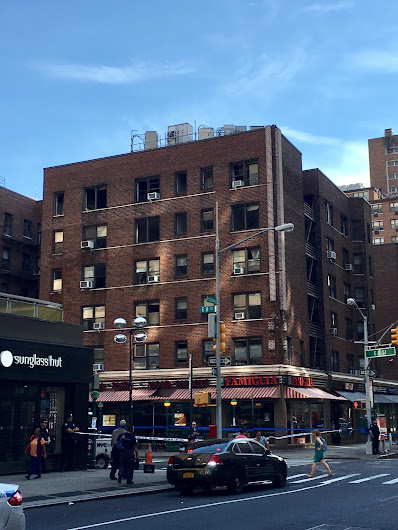 Was just there. I suggest you stay away right now or your clothes and hair will smell like smoke.

Too late. Both, dog and Human (me) smell like BBQ. Hope no one got hurt. One thing I'd like to complain about: honking cars. Have some Goddamn respect!

hope everyone got out ok

I was right there. It was intense and difficult to breathe. The top floor had their windows torn out. Glass was everywhere. And the streets were closed leaving several to witness the flames. Scary stuff. Hope everyone who lives there is all right.

I also have more pics too.

Much respect to James A. for not backing down from getting his dogs. I'll be spending my money at his Bleecker Street Bar. Thanks also to the firefighter(s) who rescued the other dog too. Good wishes to all.

I hope all people and pets survived this conflagration. Such a tragedy. Thanks to the FDNY, and I second what Anon. 10:16 said about James A, I would have done the same thing. Take me down to The Tombs, no worries, but you'd better believe I'd be bringing my furry kidz with me.

My supervisor is on vacation yet they live at 60- E 9.
Any update if the apartments made it on firs floor?

Good for you James!!!

So awful and my thoughts and prayers to everyone suffering from the aftermath of this fire. Thank god the dogs were saved (and I hope all the humans are okay as well). I'd go in and save mine as well...no way not too. SO scary!

I was about to get on the uptown 6 from Bleecker St when I noticed all the fire trucks heading north on Lafayette. No big deal, I thought, and boarded the train. As the train approached Astor Place, there was a really strong smoke smell in our car and a look of concern washed over everyone's face. That's when I remembered the fire trucks and thought there might be a fire in one of the upcoming train stations. The smoke smell was pretty intense but the trains kept making stops. I hope everyone is ok and much respect to FDNY.

I was also there on my way out of Starbucks, on 9th. The smoke even got inside. As I stepped outside, the entire area was engulfed with smoke. It immediately reminded me of the explosion on 7th and 2nd, which I also witnessed. Thank God this wasn't that bad. But it makes you wonder. If you were in a building during this, what would you take? I'd run take my cat, my laptop, and photo album and run for dear life. Its terrifying.

I hope there were no fatalities or injuries. And yes, much thanks to FDNY. They endanger their lives for the safety of others. All of them are heroes.

Glad to hear James A. saved his furry family !
Super Yaay ! He's a Hero !
Also great the firefighter saved the other little dog !
How great is that !

Great job EV Grieve! This is the first place I looked when I walked by the scene yesterday evening and you had all in the info I needed.

However, I must say that fires in the East Village were better and more authentic back in the 80's and early 90's. Back then you could really burn a place to the ground without all the bros getting in the way. My how things have changed.

The FDNY has a nickname....The Bravest.

Authentic fires!?!?!? I swear to God almighty I've now ready EVERYTHING on this blog. Everything.

@2nd Avenue Dave - It took me a minute, but I think I got where your going re: "authentic fires back in the 80's and early 90's" - i.e. we old Grievers are always bitching about how cool things used to be. Could be the "fuddy-duddy" in me, but as a witness/evacuee from the massive explosion/fire 2 years ago, I think this topic is too "hot" for jokes, even good ones.