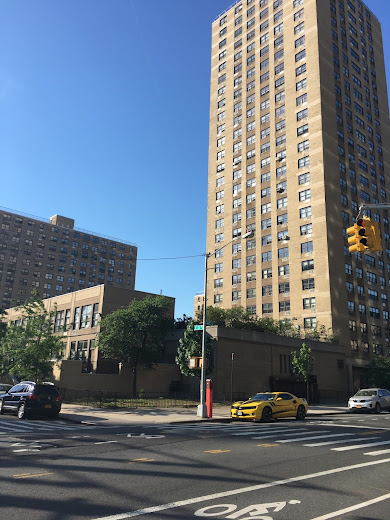 Haven Plaza, the affordable-housing complex on Avenue C, is getting a natural disaster-resistant infrastructure to protect it in case of another hurricane with the force of Sandy.

Officials recently broke ground on the $9.89-million project, which will rise at 13th Street.

Here are more details via the official news release on the project:

This new two-story structure plus basement and the upgrades throughout the complex are in direct response to 2012’s Hurricane Sandy, when the nearby East River overflowed its banks, the Con Edison East River Generating Station adjacent to Haven Plaza exploded, and, as a result, Haven Plaza lost all electricity and steam for heat. Residents – many elderly – were trapped without elevator service, electricity, heat or water. Men and women of the National Guard shared their field rations with residents until the power returned.

Here's more in a statement from Daniel Allen, principal of CTA Architects, the project's designer:

"The new facility addresses Haven Plaza’s need to be self-sufficient during both regular operations and in case of a natural disaster, instead of relying on a costly ConEd steam supply. We also wanted the new structure to be architecturally attractive due to its visibility on a high-trafficked location. The front façade will be glazed to allow the passers-by to view the inner works of the building and equipment within." 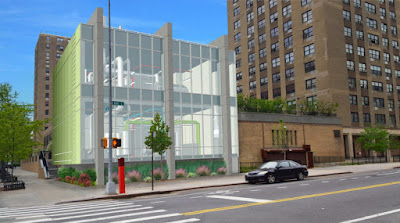 This is a really good thing for those who reside in Haven Plaza. Of course, residents – many elderly – were also trapped without elevator service, electricity, heat or water in all the surrounding public housing buildings in the aftermath of Sandy. Where's the disaster protections for these residents?

In any event, according to DNAinfo, who first reported on this last week, the project will be complete in 2018.

The 371-unit, four-building Haven Plaza complex between 12th Street and 13th Street was completed in 1966.
Posted by Grieve at 4:17 AM

But if it's a generating plant, why is it at ground level? If we learned 1 thing rom Sandy it was to build up. And this is 10 mm?

Hopefully a sign of progress. As a 50 year resident Haven Plaza never would I fathom the devastation and hardship that Sandy caused. Let's just hope there are no drawbacks.

This is so sad. Piecemeal projects that do not at all address the next flood equitably.

Where is the barrier along the East River that was discussed heatedly by city officials several years ago and which would protect a lot more people? Did those those officials all cash out and move inland to the Catskills or the highlands of Park Slope and Staten Island?