The NYPD said that this was actually a drug deal gone bad.

A 31-year-old resident was repeatedly stabbed when a man pushed his way into her apartment on Avenue B near 13th Street last night, according to published reports.

The woman reportedly heard a knock on her front door at 8:30 p.m.

She opened her door a crack, but then the stranger shoved his way in, stabbing her repeatedly in her torso, arms and hands, police said.

The suspect then grabbed $500 and fled.

The resident's injuries are not considered life-threatening, authorities said. She was in serious but stable condition at Bellevue.

ABC7 spoke with a neighbor of the victim.

"It's crazy," one building resident said. "They need to focus on those doors and security and locking them."

The resident, who did not want to be named, believes an open security door may have given a suspect access to the building.

"It's always open," the resident said. "And nobody has fixed that security buzzer. There are a lot of issues."

So far, the only description of the suspect is as follows, via DNAinfo: "He's about 18, 5 feet 10 inches and 160 pounds, police said. He was last seen in blue jeans and a red shirt." 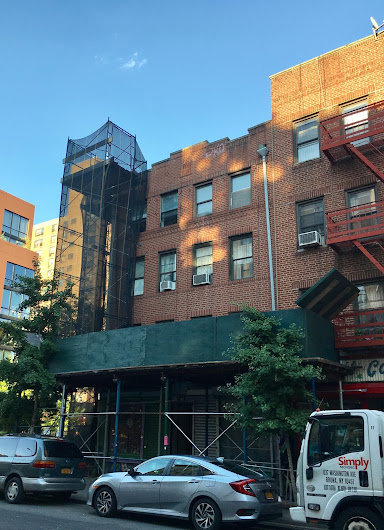 [Photo from tonight]
Posted by Grieve at 3:30 PM

I hope they caught him on a security camera on the block so we can see what he looks like.

Great description. How about a little more info? Identifying marks, unusual features, hair color, race or ethnicity, anything. These descriptions are 100% useless.

It sounds like the old days I remember, when you had to put the chain-lock on before you opened your door, exactly so someone couldn't push in.

I hope this woman will be OK.

Hate hearing stories like this, hope the woman recovers soon however an attack like this will probably haunt her for many years to come. It's important that everyone hears about this attack, there are so many new people in the neighborhood and they are under a false sense of safety because they pay such high rent.

So sorry to hear this. Came home last night and saw the cop cars and ESU bus on the scene but had no idea what had happened, just knew that it was something serious given the number of responding vehicles. Hope she recovers quickly, and that they catch the monster that did this soon.

That poor woman. I am grateful she is alive. Sounds like quite an ordeal. She will most likely need therapy afterwards. I am sending her my best wishes for a solid recovery.

As far as the man who did this, I hope they catch him, throw the book at him, and let him rot in prison forever. What a coward.

Anon. 5:34pm...Agreed. The non-description descriptions are both silly and extremely frustrating.

@6:37pm: You are right when you say "there are so many new people in the neighborhood and they are under a false sense of safety because they pay such high rent."

People need to realize that there are always "bad guys" around, always people who want what someone else has (whether it's money or computers or cell phones or whatever).

Now consider:
- that our community is much more made up of transient renters than it used to be, and
- that criminals know the new rents are quite high (which means the criminals assume that robbing those apartments will get them more valuables and/or cash).

I am very sorry to hear what happened to this woman, and I agree that she will likely be haunted by this for a long time to come.

I don't understand why people cannot describe criminals by their race. It would make it a lot easier to help serve justice..body size and color of clothes means nothing. Not reassuring..Just plain stupid.

So sad this happened in our neighborhood. But no neighborhood is safe, the bad element can travel to good neighborhoods as well. We the good law abiding citizens needs to watch out for ourselves as well as our neighbors. Call the police for any suspicious activity in our buildings and neighborhoods.

NYC is a bunch of people waiting to steal your shit. Once people learn that, we'll all be better off.

Weird part of the story: who has $500 cash that's easily accessible laying in plain site in their apartment???

I'm not victim blaming, but that peaks my interest.

This is a scene out of a horror movie. BTW, I've read some of the comments on here, which I find offensive and disconcerting. Who cares if she had $500 lying around? Or is she stupid for not identifying his race? Are you implying she asked for it or knew the asshole who did this?

Also, we need to rally together as neighbors and offer our support for this woman, who could have died incidentally. She was attacked in a brutal and heinous way and someone wants to dismantle the situation and possibly point fingers at the victim? Can you imagine what it would be like to interface with a stranger who not only robs you, but who stabs you multiple times in the chest and abdomen with a large knife? That is trauma and assault. And she will certainly need counseling for a long time if not for the rest of her life.

Let's be glad she is going to make it through and hope this criminal will be fully prosecuted. And as one commenter said, "rot in prison."

Boy. I hope they catch him. Coward indeed.

Some of these comments are utterly ridiculous. Speedy recovery to this unfortunate VICTIM.

Because we have become so PC we can't say if a person was white black or any other ethnicity? Sad.

Seriously...don't open your door to strangers. This is why peepholes were invented. Another rule of thumb as a New Yorker, if you aren't expecting anyone then ignore the knock. They won't be offended.
There is a definite false sense of security by young folks in the neighborhood. The kids in my building leave their keys in the door all the time. My next door neighbor leaves her door cracked open for hours. Its like they are inviting trouble.
When I first moved here in the early 90's my next door neighbor made the mistake of allowing a group of guys to come in after him....they followed him up the 5 flights and mugged him at knife point.
This is New York...you have to have street smarts or you will get messed with.

One of the news channels interviewed the people who hang out in the candy store where they play dominoes on the curb, and these lifetime EV residents actually said nothing bad like this ever happens around here. It's as if people feel obliged to defend their own neighborhood when the TV cameras show up. Meanwhile in the past few months several robbbeires, gropings and attempted rapes have happenned in StuyTown right across the street.


Obviously if there's an accurate description and/or photos, definitely post them. But for people who want race added to a vague description: if you say an 18 year old black male (for example), does it really help? Then you're just spreading racist paranoia, with people eyeing every single black teen on the street.

There's about 15 hidden weapons known to me within reach quickly , also all fire some sort of projectile. Include several acres... It's 3 esses SSS shoot, shovel and shadup 😜