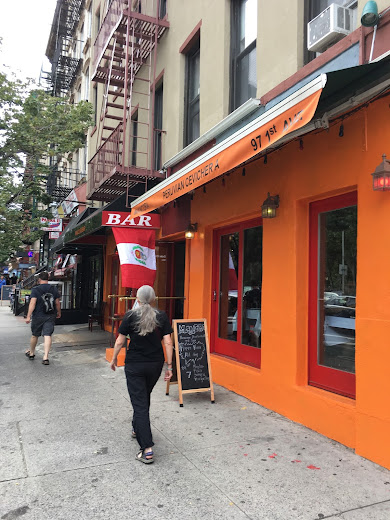 Mancora made a pretty quick transition to its new location at 97 First Ave. ... last Monday we noted that the Peruvian restaurant was moving across Sixth Street to the Spicewala Bar Indian Cuisine space.

Anyway, Mancora is up and running again, as several EVG readers pointed out. (Has anyone been to the new spot?)

As previously reported, since Banjara moved in late 2013, the restaurants at No. 97 went through seven name changes/concepts.

Something called Ummburger had been vying for the now-former Mancora space at 99 First Ave. Haven't heard anything else about that project.

Previously on EV Grieve:
Mancora returning to 1st Avenue in new location
Posted by Grieve at 4:25 AM

Email ThisBlogThis!Share to TwitterShare to FacebookShare to Pinterest
Labels: Mancora

I had dinner there last night -- delicious Pisco sours, grilled octopus, ceviche, paella. The space is a bit smaller and brighter; people still lovely. I'm happy they're back so quickly.

Between this and S'Mac, so. much. orange. Makes me hanker after an Orange Julius - the original 1970s recipe, not the new, safe, raw egg-free one.

we'll make it a point to check it out soon and report back. very happy making news indeed. xo, jg