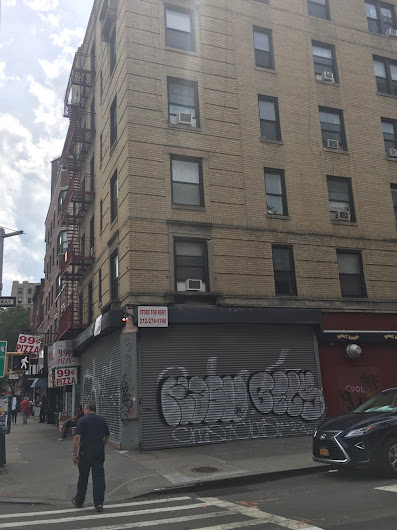 Updated: This item is no longer on the July SLA docket.

The Black Rose, the bar that recently lost its space at 117 Avenue A, is looking to move a block to the south and reopen in the former corner home of Benny's Burritos, according to paperwork filed ahead of next month's CB3-SLA committee meeting. 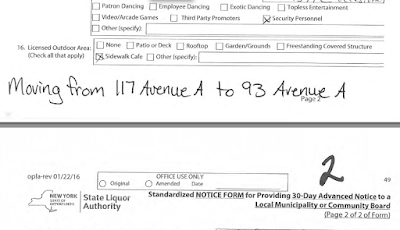 In late April, the Marshal took possession of the bar space between Seventh Street and St. Mark's Place on behalf of landlord Steve Croman. There were accusation that Croman forced the bar out, even removing the boiler.

As for Benny's, the restaurant closed on Nov. 29, 2014. The corner space at Sixth Street has sat empty since then. The Benny's awning remains up... 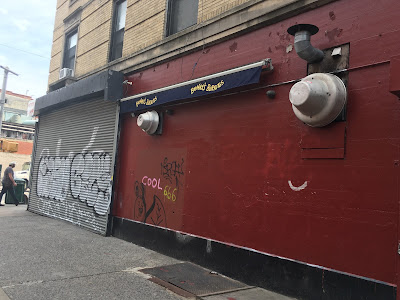 Benny's owner Mark Merker said that they were having trouble staying afloat, as costs and rents rose while competition increased from Chipotle and other restaurants that served burritos. Benny's limped along for a few months with a smaller, mostly to-go spot next door. They closed in February 2015. This space became a 99¢ pizza place called 99¢ Pizza, which seems to do brisk business.

There's not much more information about the new Black Rose at this month. The full questionnaire isn't online yet. (Updated: The PDF of the questionnaire is here.) And it will be somewhat new given that much of the bar's interior ended up on the corner of Avenue A and Seventh Street, where Jerry launched the short-lived Tompkins Square Park Art Bar.

Between Yucca bar, Niagra, the pearl spot and a new black rose attempt, 7th to 6th is cemented as the crap part of A

Oh no, please no. This block is a disaster already, just try walking by there on a weekend evening. The sidewalk is always clogged with semi-drunk people from the karaoke place and bar next door.

Wait, I can't remember. Remind me what the name of the 99 cent pizza place is?

We had our first date there Bennys, the corner table for 2, 25 years ago....
NO MORE BARS PLS.
Have to say, groups of young drunk people are way scarier than before...... remember when most people where scared to come here and it was so nice and quiet ....I used to cal past 1st ave. the urban suburbs ...... those where the days my friend.....

Ugh that place is terrible, all the DJs and underage drinking! No thank you!

If they couldn't afford the last place how can they open a new place? I don't get it.

rich "rock n rollers" will never learn their own failures.

you lost 20k+ a month so you move a block south to do it again?

sorry.. im mostly mad you guys decided taking down the ancient faux wall panels at odessa bar just to then put up a mall poster was rock n roll at all.

Bars of the past have morphed into restaurants now, the big difference is bars were quiet until the drunks spilled out to the sidewalk, now restaurants have open fronts, blare music and and even the sober clients are yelling just to have a conversation.

Yeah I do not get why anyone would give a lease to people who could not afford old space. Last thing we need is a bar there.. Was hoping for a cool yet quiet restaurant.

I agree with other poster.. preferred it when all the " Bro Types" which we would have called Frat Boys in the 80's/90's.. were afraid of Alphabet City! IT was a way cooler vibe!