Shoolbred's is signing off on Father's Day 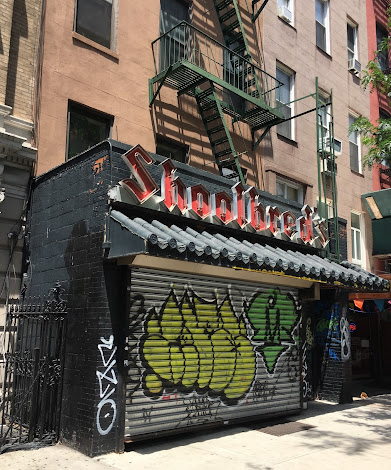 After nearly 10 years in business, Shoolbred's is closing at 197 Second Ave. between 12th Street and 13th Street.

The bar, with wood-paneled walls, stained-glass windows and a fireplace, meant to evoke a classic Scottish pub, will shut its doors following service on Sunday.

Co-owner Robert Morgan selected this Sunday as a last date for a reason.

"It is appropriate that we should be closing on Father's Day weekend," he said via an email. "Shoolbred's was designed as 'Your Father's Bar, while your father is away on business.'"

Morgan, who also operates Kingston Hall on Second Avenue and Baci e Vendetta on Avenue A with business partner Nic Ratner, said they are "returning the Shoolbred's space to the landlord, who is asking egregious rents."

"We would like to thank all of our loyal customers and incredible staff for making this an amazing decade," he said.

Turns out that the Ninth Ward — which also has an outpost in London — will be returning to No. 180 later next year after some building renovations. We'll have more on that in an upcoming post.

This address was home until 2007 to Jade Mountain, home of the great Chow Mein sign.
Posted by Grieve at 4:30 AM

Email ThisBlogThis!Share to TwitterShare to FacebookShare to Pinterest
Labels: Shoolbred's

They were closed by the Health Dept last week.

Who was the clientele for this place? Not a bar goer and usually don't walk by here in the evenings.

Is it really that long that Jade Mountain is gone? Wow.

Now if only The 13th Step and Continental would close.

If only Jade Mountain could return. We need some good, affordable restaurants, not more bars for bros.

The landlords which brought the "bro bars" upon us may be the solution to getting rid of them all come lease re-newel time. That's right greedy landlord / speculator make sure to double or triple the lease next time. I rather have an empty storefront (retail blight) than another spring break bar.

That's too bad. That was a very nice bar. Sorry to see them go.
The rents are too damn high...

Something's gotta be done: this place was always busy; has great food and drinks; friendly staff; and good prices.

I really like the design of each of their spaces - didn't realize they were owned by the same people. Sad to see this place (and the fireplace!) go - hopefully they might bring this concept to a larger space.

I enjoyed the 2 for 1 chips they handed out.

Oh good grief, no way this place is on the same level as 13th Step or Continental. It'll be missed.

Shoolbred's was a great bar that definitely wasn't "brotastic" It was a place to get a few drinks and sit at the back tables and chat with friends. It will be missed.

The last 6 posters need to understand that on this blog there are a select few, mostly regulars, who regurgitate the same old lines depending on the subject of the blog post. They follow the same script for posts about bars, buildings, bikes, etc. Inane.

Maybe this one was more low key during the week, I never went, but they still did the whole Santacon thing. I dislike their other spots. They really just want an empire to cash in on the herds. That's good too, pull in on Avenue A for this slumlord, you know.

Shoolbred's was a great bar that somehow managed to escape the general disaster of 2nd Avenue. Maybe it was just small and dank enough to keep out the "bro" crowd. Great bartenders, too.

A loss for the neighborhood.

They definitely did the Santa Con thing, which loses them big points in my opinion. Same with 9th Ward.

It would be nice if we could have Jade Mountain back, but I realize that won't happen, so I'd settle for "it would be nice to have some non-bro use of that space".

This was a great hideaway - especially in the holiday/winter time. Sad news. (and this is coming from an anti-bro bar neighbor - this place had merit)

Your description is spot on. Anytime anywhere closes, the exact same replies (by I'm assuming the exact same people). And the replies have no leg in reality. Shoolbred's clientele was nothing like 13th Step. It would take 3 minutes of being inside of each to figure that out. But people like having very strong opinions on things they know little to nothing about.

@ 5:42 closed by health dept, well there you go. They own Kingston Hall and Ninth Ward woo hoo. The bathrooms said Sex Drugs Rock n Roll, how hip can you be. They attract the bridge and tunnel masses, just look at the yelp reviews. Did the neighborhood really need Ninth Ward and Kingston Hall to add to the shit mob. They are cash cows.

You take part in Santacon, you're a bro bar, period, end of story, case closed.

So it wasn't as bro as 13th Step - bro nonetheless cuz only a bro bar would welcome Santacon.

Mona's, Sophie's, and Manitoba's don't, and I'm guessing Otto's Shrunken Head and the longtime bar off 3rd or 4th Avenue whose name escapes me doesn't either. Of course Continental does because Trigger will do anything for a buck.

As a former Shoolbreds regular I say from experience it was nothing like 13th Step or Continental and the opposite of brotastic. It was a great bar and it's a loss to the neighborhood.

So this place has been shut down by the health department since 6/7 and they stayed operating here and there since seemingly on the days where the DOH does not do inspections. I remember seeing a yellow sign on the door that day that they must of ripped down saying it was shut down and the sign should not be removed. It is very disconcerning that an establishment could and would remain operational despite getting shut down for what seems to be unsanitary conditions. I hope they operate their other locations with more concern to the well being of their patrons.

I loved this place ! Shout out to Bob ! Best bartender!

I spoke with one of the bartenders in May and he said that they would be closing in June because the building owner did not want them any longer. So not sure being shut down on 6/7 had anything to do with the bar closing.

People on this site are hilarious. The same crowd that was crying over the closing of a McDonald's is rejoicing over the closure of one of the chillest, most gorgeously decorated, and most characteristic bars in the neighborhood.

You’re right. I did the door of my own club for 15 years to make ends meet so the local bands could have a place to play and maybe even get Signed like Fallout Boy did and dozens of other bands cause I’m a Sell Out!