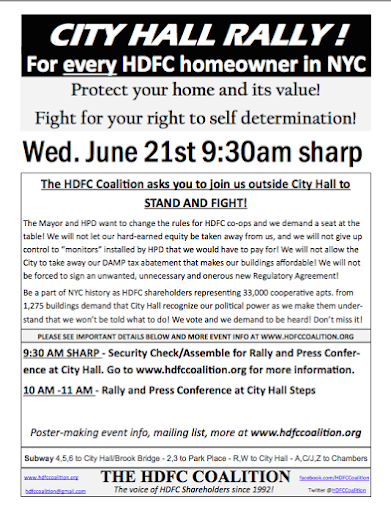 HDFC homeowners are holding a rally on the steps of City Hall this Wednesday morning. The above flyer has all the details.

As previously reported, there are proposed new regulations on nearly 1,200 privately owned co-ops, including a number in the East Village.

Here's a recap from an EVG reader and co-op resident about what's happening from an earlier post:

This new proposed Regulatory Agreement is overreaching and would result in a loss of autonomy and decision-making abilities that benefit HDFC buildings, as well as costing individual shareholders hard-earned equity.

The new rules include a 30 percent flip tax on all units when they sell; the requirement of hiring outside managers and monitors at our expense; a ban on owning other residential property within a 100-mile radius of New York City; and more draconian clauses. Community meetings to discuss the agreement have been contentious and hostile, and so far not one HDFC in the entire city has publicly supported the plan. Very few HDFCs in the city need financial help and we strongly oppose a "one size fits all" regulatory agreement that will cost us money, resources, and most important, value in our home equity.

For more background, you may visit the HDFC Coalition website here.

Previously on EV Grieve:
Meeting on Jan. 17 for shareholders living in HDFC buildings

CB3 will hear HPD presentation on HDFC regulatory agreement this Wednesday night
Posted by Grieve at 11:00 AM

Email ThisBlogThis!Share to TwitterShare to FacebookShare to Pinterest
Labels: HDFCs

Seriously, fuck DeBlasio and his 2 rental units in Brooklyn.

Bloomberg knew that by not placing any restrictions that shareholders would upscale the units on their own. Passive agresion and piggy middle of the road greed equals no affordable home ownership. The thing is that you think you have the right to cash in and also the nerve to point the finger at developers and the new city when you are partly to blame.

The City desperately needed someone to take these buildings off their hands, and the residents were the only ones willing. They have worked for decades to bring their buildings back to life, and the original 10 year restrictions expired decades ago for many of these buildings. The American Dream is to own a home, which includes being able to sell it and move somewhere else. That is not cashing in...that is investing money, time and labor (sweat equity) to make a worthless building something more. If people can't sell HDFC apts for something substantial (and they will ALWAYS sell for less than market rate co-ops), then they, and their children, and grandchildren, are essentially trapped in their building forever.
The de Blasio administration has already walked away from affordable home ownership. An HDFC that finds itself in financial trouble becomes a target for the City, and the solution is seen as handing it off to a developer to create "affordable rental housing" where the rents go up and the equity disappears. The former owners are left with nothing.
If we can only provide affordable housing by ripping off the very people who saved this housing abandoned by their former landlords, we need to rethink what is happening here.
What other housing was literally saved, rebuilt and redeveloped by the residents? Not rent stabilized tenants. Not Housing Authority tenants. Only HDFC shareholders have taken on the work and responsibility!
Affordable housing is great, and we need more of it. But not by picking the pockets of HDFC shareholders!

Since when does DeBlasio own two rental units in Brooklyn?

I know that scumbag Charlie Rangel owns three or four.

For decades the city and we as tax payers have subsidized the HDFC's through property tax breaks. Now after years of receiving those breaks owners believe that they should be able to sell at substantial profits. The intention of the property tax subsidy was to keep these units affordable. As it stands now units have been remodeled and flipped over and over and the flip tax served it's purpose to raise property values and now you don't want the flip tax. Moreover, the units have been marketed to students and post grads whose parents set them up. Who's kidding who.

Anon. 7:58, you make a great and on-point argument, and you are 100% correct. Some of the HDFCs currently flourishing wouldn't even be standing today were it not for the efforts of those who put up with unbelievable living conditions in their successful attempts to save them. Unfortunately, you were trying to convince Anon. 10:47, a rabidly obsessed zealot with no firsthand knowledge of what it took to bring these buildings back online, but who has spun an entire lurid and nonsensical fantasy about HDFC apartments being sold for prices akin to the penthouse in the Woolworth Building, and solely to the children of ultra-rich parents, more than once blaming the overrunning of the East Village by Millennials solely on the supposedly non-stop sale, resale, and further resale of a couple of hundred HDGC apartments in the nabe, which fantasy he has posted over and over and over, until that poor dead horse is quite shredded; I'm surprised his arm hasn't fallen off from beating it.

A little defensive. I've followed this over the years and this is what happened (facts). Target students and post grads for their low income status. Let their upper middle class families pay for them (all cash) and renovate the units. Then sell the units, use the flip tax towards building improvements and keeping the maintenance low for shareholders. A year or two later the unit gets sold (again) at a much higher price. More flip tax money goes into the building. And viola, a hard earned asset.

Not defensive, just tired of you spewing the same absurd nonsense over and over and over. No one buys an apartment in an HDFC and then sells it a year later, that is not how these buildings work. We strive for stability, not a constant churning of apartments to generate flip taxes. For a building run by shareholders to gain a tenant and then lose them a year later is, to say the least, disconcerting - in a rental it's one thing, but that is not the way HDFCs run, we are far more of a little community, and we expect people buying in to stay for the long haul.

I like this excerpt from an earlier comment: "What other housing was literally saved, rebuilt and redeveloped by the residents? Not rent stabilized tenants. Not Housing Authority tenants. Only HDFC shareholders have taken on the work and responsibility!" So now the defense of the practices of HDFC's is to bash rent regulated tenants and people in NYCHA by implying we have done nothing to preserve affordable housing. If you knew anything about what rent regulated residents have endured or NYCHA residents have endured at the hands of Shaoul, Crowman, Icon and the City of NY you would be ashamed of your comment. Do you know anyone who lives in a rent regulated apartment or NYCHA apartment to see what they have done to transform a roof and four walls into a home? NYCHA residents have planted vegetable gardens in the complexes, painted murals, cleaned-up their playgrounds etc. Have you paid attention to what has been done to rent regulated residents and people living in NYCHA? Rent regulated and NYCHA residents are members of community gardens, shop in local stores, teach at local schools, are emergency-service workers, utility workers, bus drivers, pour your morning coffee, volunteer in our schools to name a few things. We contribute a great deal to this community and frankly your comment somehow implies that you are better then us, because you purchased something and we didn't. We attend CB 3 meetings, not only when the issue might impact our property values, but when it will negatively impact working class residents, regardless of their living situation. So you got yours, well good for you, perhaps you should think about someone other than yourself.

@10:47 AM http://www1.nyc.gov/site/finance/benefits/landlords-coop-condo.page The link shows property tax abatements for market rate individually owned apartments, not 421a or some other tax break for wealthy developers. If you're saying nobody should be subsidized, why not start with the subsidies that market rate units are getting? Surely those people are the least needy when you consider the spectrum of people who get subsidies.

@10:31 I'm an HDFC shareholder and I recognize the contributions of others to the communities we share, particularly NYCHA residents and rent regulated tenants. Others are wrong if they don't recognize or fail to acknowledge those contributions. However, I don't see how defending HDFC shareholder rights comes at the expense of those other groups. Remember that market rate co-op and condo owners get a tax abatement that is nearly equal to the DAMP tax abatement with literally no strings attached. That is why this attempt to take away rights is egregious and offensive.

Dear JUNE 20, 2017 AT 10:31 AM,
There was no intent to "attack" or "look down on" or "bash" NYCHA or rent stabilized tentants. Not at all! We all need to be able to afford our monthly rent, or maintenance. In fact, HDFC shareholders typically were rent stabilized tenants in slum buildings prior to the building converting, and we are aware of the struggle against landlords. The point was simply that HDFC shareholders took on actual ownership of these dilapidated buildings and saved them, and that investment, sacrifice and accomplishment is largely unique, and must be recognized.
Maybe the City should buy rent stabilized buildings from landlords and make them HDFCs, and all renters could be come owners!
Of course, ownership isn't always all it's cracked up to be!
Peace!

"The point was simply that HDFC shareholders took on actual ownership of these dilapidated buildings and saved them, and that investment, sacrifice and accomplishment is largely unique, and must be recognized".

Feels like a bit of a back-handed apology with this tidbit of info, if your sorry just apologize and leave it at that. You have no idea what it is like to live in a rent regulated apartment and be subjected to daily harassment and to go to bed at night worrying about losing your home. Those of us who have stuck it out now live in dormitories and most of us do it because we love the hood as we in no way profit from staying. I don't think being an HDFC shareholder is a unique accomplishment that deserves recognition. Those of us no matter what are situation who have had an affordable place to live should frankly consider ourselves lucky and do everything we can to make the same opportunity we have available to others.