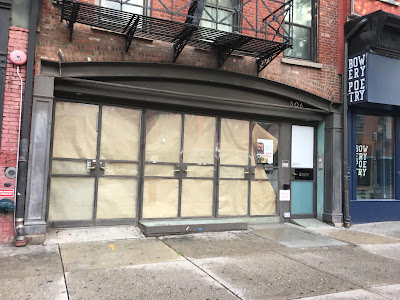 The New Stand — a concept described as "If your favorite bodega and your favorite blog had a baby" — is opening a retail outlet at 306 Bowery, Patricia Field's former storefront.

The Real Deal, who first reported on this transaction, notes that the New Stand already has retail locations inside the Union Square subway station, at Brookfield Place and at the Turnstyle market at Columbus Circle. This will be the New Stand's largest space.

Wired had a feature on the New Stand from November 2015:

The New Stand is an underground newsstand, updated for modern commuters. We’re standing in The New Stand in Union Square, which once was “an old newsstand that sold chocolate bars and Snickers and magazines and Snapples, and has done that exact same thing for 30 years,” [co-founder George] Alan says. ... It’s stocked with an array of snacks, on-the-go toiletries (including Help Remedies kits, Binchotan charcoal toothbrushes, and Sir Richard’s all-natural condoms), as well as consumer candy like Google Cardboard sets, Closca collapsible bike helmets, and instant Instax cameras. It’s a mix of truly useful and genuinely covetable.

Like the newsstands of yore, The New Stand will serve news. But instead of selling Posts and TimeOuts, it will blast easily digestible nuggets of news from an app that will work underground, with or without Wi-Fi. It’ll include daily playlists, reblogged news stories, and photos and videos making the rounds online.

In December 2015, Field announced that she was closing her boutique at 306 Bowery to concentrate on her film and TV work and other various projects.

Field, who has run a shop for 50 years, starting in the West Village in 1966, had been at this location between East Houston and Bleecker since 2012.
Posted by Grieve at 4:12 AM

Email ThisBlogThis!Share to TwitterShare to FacebookShare to Pinterest
Labels: 306 Bowery, The Stand