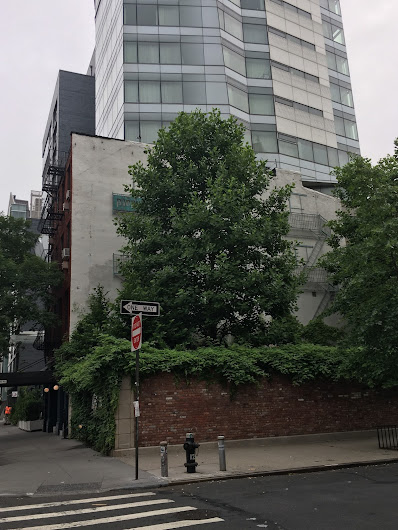 When developers of the Cooper Square Hotel (now the Standard East Village) were buying up properties to demolish to make way for their 21-floor building, two residents of 27 Cooper Square declined to leave their longtime home (the two had secured artists' loft status in the 1980s, and weren't legally required to move) ... and so the circa-1845 tenement became fused together with the new structure.

Today, No. 27 houses part of the hotel, including administrative offices and the front desk. (The residences remain upstairs.)

And tonight at 6, the Greenwich Village Society for Historic Preservation is unveiling a plaque at the building between Fifth Street and Sixth Street to note its importance in neighborhood history.

GVSHP and the Two Boots Foundation will commemorate the role of 27 Cooper Square as an important nexus for artistic and cultural movements that continue to reverberate today with the unveiling of a historic plaque.

In the 1960s, this 1845 former rooming house became a laboratory for artistic, literary and political currents. Writers LeRoi and Hettie Jones, their Yugen magazine and Totem Press, musician Archie Shepp and painter Elizabeth Murray all had homes here. The vacant building was transformed into a vital hub of cultural life, attracting leading figures including those from the Beats and the world of jazz. It was also the childhood home of a second generation of East Village artists and thinkers.

GVSHP and Two Boots Foundation will install a plaque on the building at 27 Cooper Square to mark the significance of the site in the artistic legacy of the East Village. Speakers will include, Accra Shepp, photographer and son of world-renowned saxophonist Archie Shepp who lived in the building beginning in the 1960s, and writer and poet Hettie Jones, who still lives at 27 Cooper Square will speak about the importance of this building as a hub of creativity. 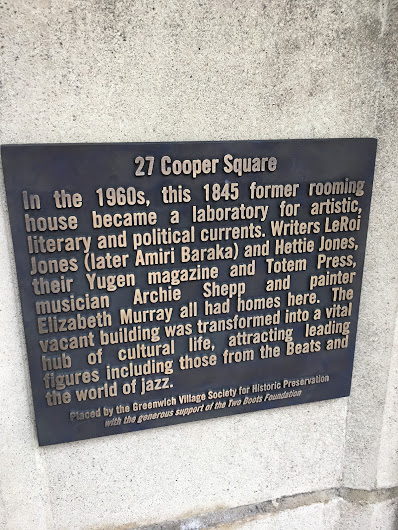 The loss of #35 is still one of the greatest acts of cultural vandalism perpetrated against this neighborhood - and all so some out-of-town developer could swoop in, destroy a piece of history, and profit off the resulting pile of shit he built in its stead.

I never knew where Amiri Baraka (then LeRoi Jones), Hettie Jones, Archie Shepp, and other major cultural figures from that era lived, so I'm very happy to hear that at least something of that era isn't being hypergentrified out of existence, i.e., destroyed, in favor of yet another luxury tower or hotel for the soulless global rich!

Hi Gojira,
# 35 Cooper Square was also home to "Hisae's Place", a Japanese / Italian (!) restaurant and bar. She was Japanese and her (deceased) husband was Italian. They had a nice outdoor patio where I spent many a warm summer's evening having dinner and a cocktail or two or three or four. She and her granddaughter lived upstairs. Well, I found out by chance that she reopened at a different location and went to visit. It was a lovely reunion and I go there occasionally. It's not the same as at the old place, but at least it hasn't totally disappeared.
Her new place is called "212 Hisae's" and it's located at 212 East 9th Street. http://www.menupages.com/restaurants/212-hisaes/menu

@Walter, I was a regular at her "All You Can Eat Sushi" on Monday nights. Loved that place. Remember reading an article about Donald Manes, the "PVC Bagman" in the sweeping 1980s corruption scandals, committing suicide while I was sitting at the sushi bar. Ah, the good old Koch NY days.

But thanks for the tip re her 9th Street place, had no idea she was still around. Will check it out!

Nice, very well done and important. What a history there!