Rally in support the Public Theater this evening at Astor Place 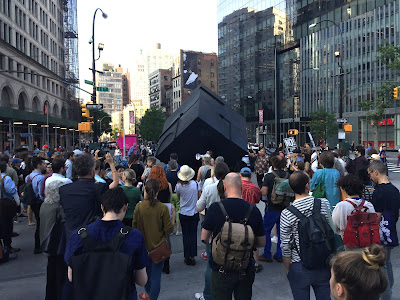 There was a rally this evening at 6 on Astor Place to support the Public Theater and "condemn corporate censorship" ... 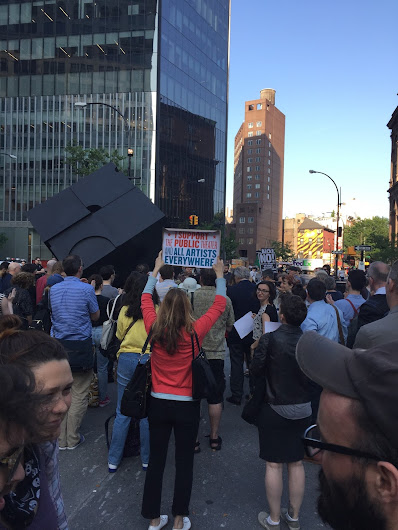 As you may have read, criticism in right-leaning media outlets prompted Delta and Bank of America to pull support of the Public Theater's production of "Julius Caesar" in Central Park ... which portrays Caesar as a Donald Trump-like character (and you likely know what eventually happens to Caesar...)

A clash between Trump supporters and an iconic Manhattan arts institution over what kind of art is appropriate was perhaps inevitable in this hyperpartisan age. The proudly iconoclastic Public Theater is the birthplace of “Hair” (the Vietnam-era antiwar musical) and “Hamilton” (the hip-hop musical celebrating immigrants). And [Oskar] Eustis, the Public’s artistic director, is an unabashedly left-leaning theatermaker who believes in the value of provocative art.

Defenders of the production, including some theater critics, describe the Public’s “Julius Caesar” as nuanced, complex and loyal to Shakespeare’s text — a cautionary tale about the costs of political violence.

The Public, located nearby on Lafayette, released this statement on Monday...

There is no corporate censorship going on, as censorship can only be imposed by the State, a criminal entity. As the Wikipedia article on the "Roman censor" correctly points out, the Roman censor, an agent of the Roman government, attempted to impose public morality. (It should say "by force.") The Wikipedia article on "Censorship" has it wrong when it says that censorship can be imposed by private, i.e. non-government agents. It confuses censorship with editorial policy, which is what BankAmerica and Delta are doing. They have a right to withdraw their support from any production they would like, which reflects their editorial decisions and is in no way related to censorship. Censorship can only be imposed by the State--by force.

Bill, for peace, free markets, and understanding the definition of censorship and editorial policy

Did they get a Steve Bannon imitator to play Brutus?

I saw the production. It's actually harmless in terms of satire. But in today's culture where we have erased most bounderies - just ask Griffin, Maher and Colbert - we have to be careful. In the 60s when the country was on the edge of revolution there were 5 major assassinations: Kennedy, Kennedy, King, Evers and X. Not good. Considering the level of hate on the streets today. The level of entitlement. It could get worse. We more than ever depend on level heads.

Hey cmrrtty how 'bout you STFU about "dangerous" speech re: Trump?

1. People have a right to put on a play about someone who gets assasinated, it's called freedom of speech.

2. People bitching about this play would not be bitching if the Julius Caesar in this play was Barack or Hillary, and where was the outrage over people making Barack effigies being lynched and Hillary target practice sheets?

3. If Delta and Bank Of America want to withdraw support of this play, their right to, and my right to patronize neither business for folding under pressure by Trump supporters for fear of losing their business which is a bunch of bullshit because most of them will use both at some point cuz like Trump they're by and large lazy slobs who will use whatever is convenient and not give a shit what they support in the long run. They cried about Starbucks not having the word "Christmas" on their cups but still go to Starbucks etc.

For East Village residents I recommend you join the Lower East Side Credit Union which gives you no-fee access to ATMs all over the country, if you don't want your money in Bank Of America, Wells Fargo etc.