2nd Avenue gas-explosion defendants due back in court June 21 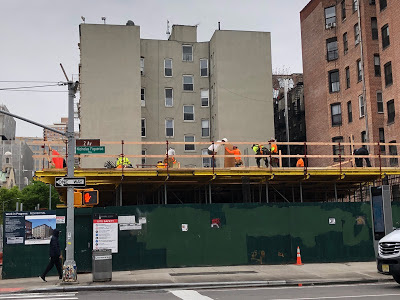 On Friday, we noted how quickly the 7-story condoplex was rising at 119 Second Ave. at Seventh Street, site of the deadly gas explosion on March 26, 2015.

The work, which started in January, is moving along much more quickly than the legal case against the defendants.

The previous owner of 119 and 121 Second Ave., Maria Hrynenko, was due back in New York County Criminal Court on Friday. As in the previous 25 appearances, the outcome was the same since the first appearance in February 2016 — "adjourned/bail continued." 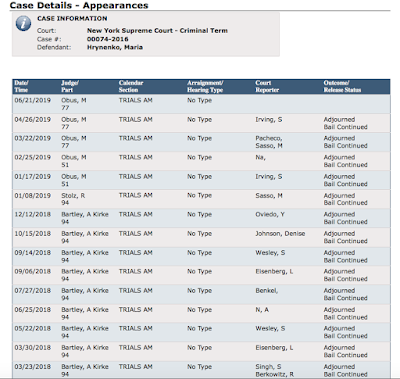 Charges against Hrynenko, Kukic and Ioannidis include second-degree manslaughter. All three are due back in court on June 21, according to public records.

In March, the fifth defendant, Andrew Trombettas, was sentenced to probation and community service. Trombettas had previously pleaded guilty for his role in rubber-stamping a modification to 121 Second Ave. prior to the explosion that killed two men and injured 20 others on March 26, 2015. The D.A.'s office charged him with two counts of "Offering a False Instrument for Filing in the First Degree, a class E felony."

2nd Ave. explosion — landlord, 3 others charged with 2nd degree manslaughter; showed 'a blatant and callous disregard for human life'
Posted by Grieve at 4:25 AM

Since we will soon be heading into summer, chances are they will adjourn a couple of more times until the fall. New York Judges and defense lawyers are known to highly value their vacation rentals in the Berkshires and time shares in the Hamptons.

As I’ve said before, the prosecution is slow walking this because they don’t intend to prosecute these scumbags. Cy Vance is a coward, and won’t bring a high profile case to trial unless it’s a 99.9% chance to win. This will end with a plea deal with no jail time, and the families of the deceased will get pennies on the dollar if anything. A tragedy all around.

Yep, this is going to go on for as many years as the defendants' lawyers can make it drag out. Then everyone will cry "poor!" and say they (or their estate) has no $$ for any settlement that's reached.

Nothing will bring back those two young men who were killed, nor affordable housing for all those who lost their homes.

Government really doesn't give a sh*t about regular people.

Yep, the adjournments will continue, and the criminals will be treated leniently, and the exploited, the grieving, the beleaguered will not get any or adequate restitution or closure. There is no justice system. The judges, the courts...they're bought by the interests that have the resources to continue to exploit and murder in the name of...oh, what are the terms that these greedy, gentrifying, negligent, etc. criminals use instead of "line our pockets" and "enrich ourselves exponentially"...growth, betterment of the communities, provide higher end whatever for the whatever taxes and something something infrastructure.

The revolution is going to be soon and it's going to be very, very messy. And more and more necessary as people are pushed to their limits.

Lock those greedy bastards up and throw away the key.

Everytime I walk by there I feel a very strong presence lingering. It is a very deeply angry unavenged energy...overwhelming sorrow too...let's see what more happens...those buildings are going to be haunted.