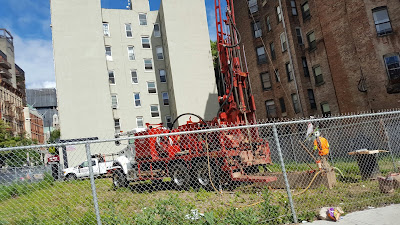 According to public records, Maria Hrynenko's companies — MAH Realty and Kiev Realty — have sold the flattened properties at 119 and 121 Second Ave., site of the deadly gas explosion in March 2015.

The new landlord, listed as "Avenue Second Owner LLC" with a Wooster Street address, which is Shaky Cohen's Nexus Building Development Group, Inc., paid $9.15 million for both lots, per filings recorded yesterday. (A tipster previously claimed that Premier Equities, a Midtown-based real-estate investment and development firm, was to be the buyer.)

It's not known just yet what the new owners might have planned for the two parcels. Workers have been on the site in recent days taking a full soil profile.

Lawyers have said that a sale could potentially jeopardize the settlements of the victims. The DA charged Hrynenko and several others, including her son, with involuntary manslaughter and other alleged crimes. The criminal case against her has yet to go to trial while the multiple civil actions are still making their way through the courts.

As for lawsuits, Hrynenko is now claiming that her management company was "careless and reckless" in its work that led to the deadly explosion. Investigators have said that an illegal cost-cutting gas delivery system at 121 Second Ave. may have caused the blast that killed two men and injured a few dozen other people as well as destroyed three buildings — 119, 121 and 123 Second Ave.

According to the Post back in March, a broker working with Hrynenko contacted the new owner of the lot at 123 Second Ave. The broker reportedly said they had a buyer interested in purchasing all three lots. However, the owner, Ezra Wibowo, who paid $6 million for the property, declined the offer. Public records show that he is still the owner.

A source told the Post, "For him, it’s a long-term investment. He’s not in a rush to build or develop."

Time will tell how much of a rush the new owners of 119 and 121 Second Ave. are in to build on this prime corner lot.

whatever gets built here it will surely look out of place and if the developer is a friend of the Mayor it will surely be taller than what zoning laws permit.

That money will disappear fast

Landlords win another round; regular people get screwed over once again.

This deal seems strange/possibly questionable. The 119/121 sold for 9 mil and 123 sold for 6 mil. I'm not sure of the square footage but it would seem that 119/121 was a lot bigger and it's a corner lot so the sale variance would be higher - closer to 12 mil? Does anybody know the sq. footage of the lots?

does anyone know why the criminal case(s) are taking so long? is there a thing where the civil cases have to go first so they can determine liability and therefore at whom to direct their criminal charges? we've all seen how this movie ends and it will include some hideous oversized behemoth on what should become a memorial park. but that woman and her contractors deserve hard jail time period.

How did they get clean title? There should be liens if there are lawsuits.

Anonymous 1:24pm, This case does not involve the property itself, per se, so there would be no liens.

Thanks for the info. So if all the lots are the same six, it begs the question why did one lot sell for 6 and 2 lots sell for 9? And the corner lot's worth more than the 2 interior lots. There's money missing here. .. like at least 3 mil!

The owner and her son along with their greedy partners and greedy family members will get over again. But our friends and all those broken
families,broken bones and heart's that continue to live with pain daily,for so many and destroyed futures. They hurt so many, and the crime comitters continue to benifit. Why ? Now they got more millions that they will also hide in others names. Where is the justice! Why does the DA allow this injustice to continue, when 2 young life's were lost and the suffering continues. WHY!

Damn. There should have been a way to prevent that until the criminal and civil cases were finished.

And of course Hrynenko is claiming it is all the management company's fault. Of course.

That's how her son came to be so closely involved with the contractors doing the illegal work...because it is the management agency's fault.

i am so sad for the families. i don't understand how the person who bears at least a large portion of responsibility for the deaths of two promising young men can come out a millionaire and all the bereaved families are left with are tears and injustice. best wishes to these unfairly tortured people.

The explosion and fire were a tragedy for the tenants of both buildings. The disruption to their lives. Probably none of them will be able to move back to this unique location where many of them had lower rent-stabilized leases. And we all might have to look at out-of-place ugly expensive modern ultra luxury buildings in their place.