There was just an explosion on 2nd avenue and 7th street east village pic.twitter.com/jvSbfdCSSe 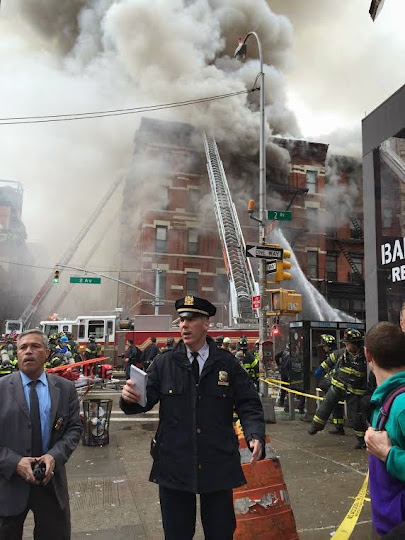 3:31 p.m. The scene from East Sixth Street between Second Avenue and Cooper Square 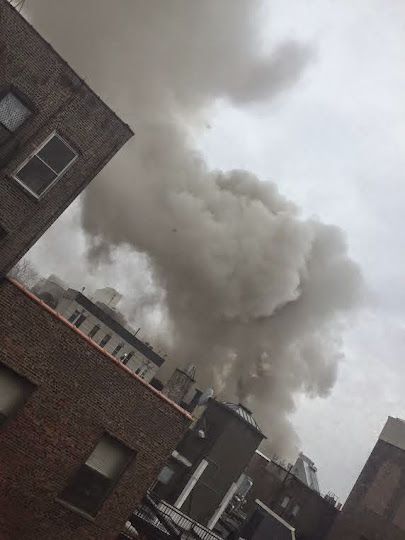 Second Ave is closed to traffic from 9th Street all the way to Houston. Crowd control underway. No pedestrians allowed from 9th to 7th.

3:56 p.m. The Post reports that up to 30 people are injured. The FDNY is trying to contain the fires from spreading to more buildings on the west side of Second Avenue between East Seventh Street and St. Mark's Place...

The FDNY arrived on the scene to find a sushi restaurant on the lower level collapsed and smoke pluming throughout the building. Then flames began shooting through the roof and quickly spread to a neighboring building.

Firefighters were pouring water onto the flames, but they had to pull back due to the intensity, and fire officials expected one or both of the buildings would eventually fall. 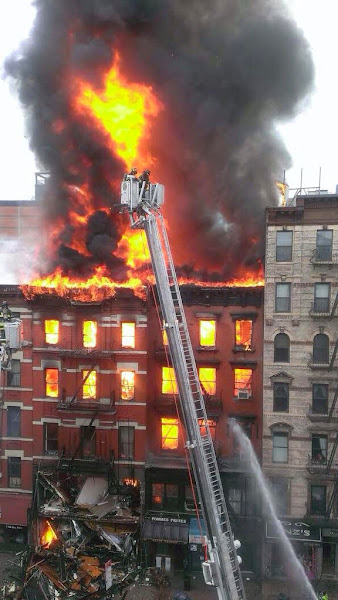 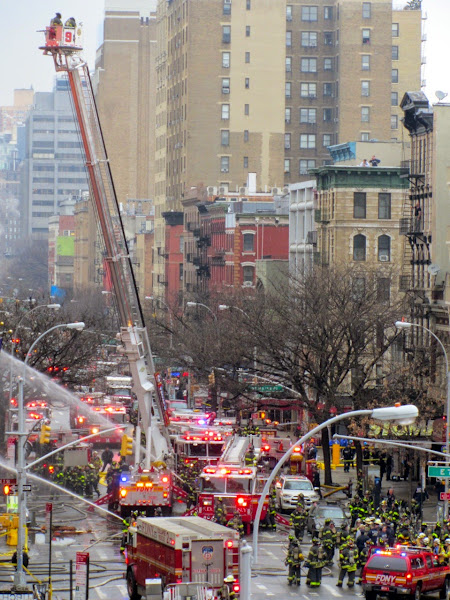 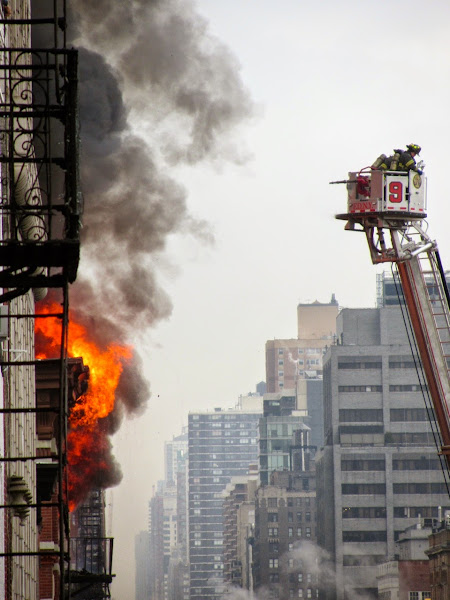 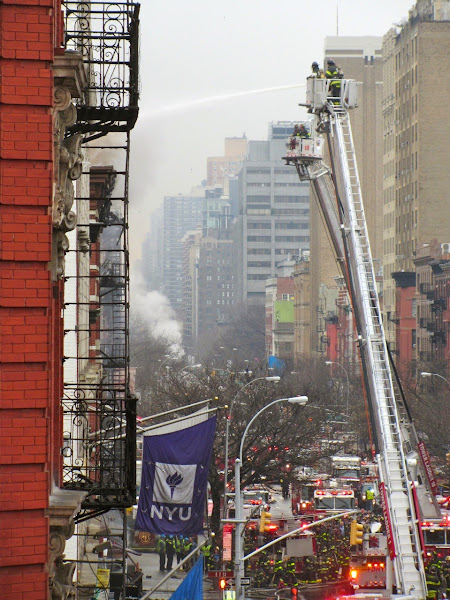 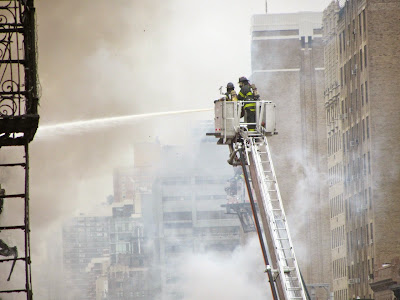 The scene from East Fifth Street and Second Avenue... 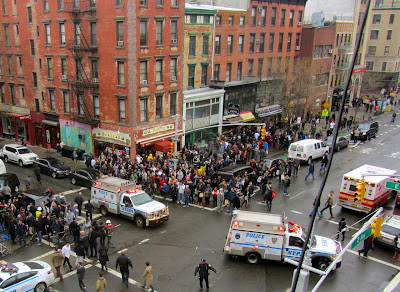 4:22 p.m. The scene from East Seventh Street and First Avenue via John Iz...

4:33 p.m. The scene from East Seventh Street between First Avenue and Second Avenue via John Iz... 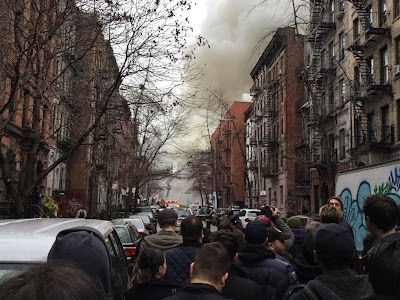 In East Village, firefighters draw water from a block away. pic.twitter.com/InD683Exhh

More from the NYPD Special Ops... 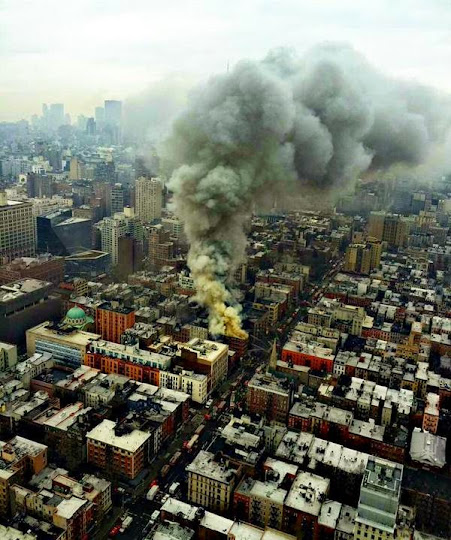 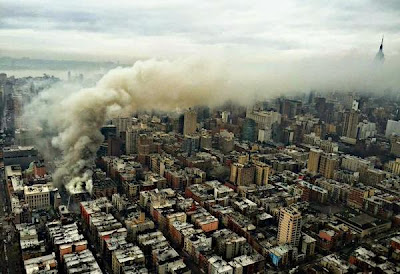 #RedCross is at the scene of the #EastVillage fire/collapse to support affected residents. #RCDAR

#NYC get ready to help with clothes, etc and help the @RedCross as there were 20 apts.. People displaced, all is gone. Pray.

A preliminary investigation indicated the fire and building collapse was due to a gas explosion, the official said.

The scene created chaos in the East Village, a neighborhood filled with apartment buildings, restaurants and bars. Perry Kroll, who lives a block away, said he felt his whole building shake, and all of his neighbors spilled out into the street.

“There’s an epic smoke column rising from the block,” he said. “I can see really big flames everywhere and chunks of ash falling from the sky. It looks like a building just blew out into the street. It’s just absolute chaos.”

5:13 p.m. From The Neighborhood School on East Third Street between Avenue A and First Avenue

By now I am sure you've heard about the building collapse/fire in the Lower East Side. Our school will be used as a Red Cross Shelter for displaced families starting tonight. If you, or anyone you know needs any kind of assistance, please let me know. 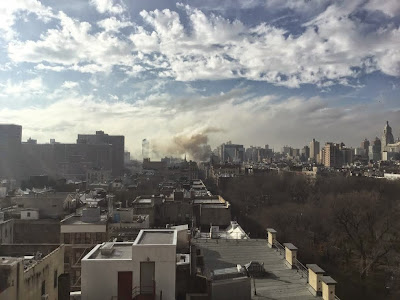 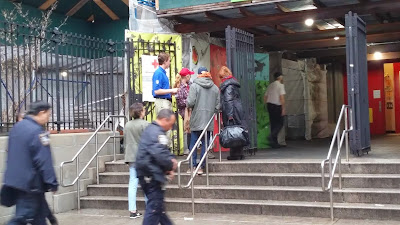 A powerful explosion in the East Village on Thursday caused two buildings to collapse and ignited a large fire that quickly spread to neighboring buildings, leaving at least a dozen people injured, at least three of them critically.

Mayor Bill de Blasio of New York, speaking at a news conference at the scene, said that “preliminary evidence suggests a gas-related explosion” was caused by plumbing and gas work being done at 121 Second Avenue, near Seventh Street.

The explosion and ensuing fire destroyed that building and led to the collapse of an adjacent building, 123 Second Avenue.

Two other buildings were damaged, and one of those buildings was still in danger of collapse, officials said.

The buildings that house Pommes Frites (No. 123) and Sushi Park (No. 121) have been destroyed. 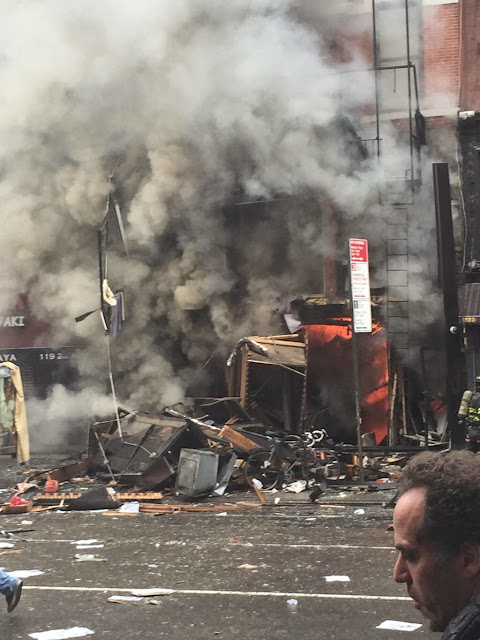 This is my street right now #EastVillage pic.twitter.com/FGjDWOTLUP

7:47 p.m. Here is the full text of Mayor De Blasio's press conference earlier… as well as comments from other city officials...
Posted by Grieve at 3:26 PM

OMG, horrible! I hope no one was hurt.

Everything is on fire, now 2 buildings on fire, debris everywhere, Pomme Frites and all stores below in big trouble, what a disaster, hope all are safe.

Horrible. Tons of firetrucks racing up Allen Street past my apartment. I went straight to EVGrieve's Twitter, knowing you'd have the intel. Thank you.

Hope no one is hurt!

Praying that everyone is Ok, including our brave firefighters.

Oh f*ck...there's an elderly artist couple on the top floor of one of those buildings, both of whom have medical conditions. Praying they weren't home when this happened.

Who owns this building? Is it Kushner, ICON, Shaoul?

Is there anything I can do to help at this moment? Does anyone know of anything that can be done by a non firefighter, non policeman?

They just rehabbed one of those buildings, there were some photos on this site of the crane delivering drywall last year i think. Terrible for the residents.

Wasn't there also a huge fire at a building nearly right across the street from there on 2nd avenue about 5 years ago? Top two floors only on that one, started by a candle, IIRC.

I hope everyone made it out safely.

View from the back of my building was intense... glad I had the windows open, prevented them from being broken in like everyone who had them closed..
Scary shit.

Anon 4:14 Our neighbors might be burning as we speak, and this is what you are worried about??? WTF is wrong with you?

Someone asked what they can do as a non-firefighter/non-police. Contact the Red Cross. I know that 45 minutes ago, they put out a bulletin for Mental Health, Health Services, Mass Care and ERV support volunteers in response to this. Also, there has recently been a blood shortage. With many burn victims, there will be an even greater need. So, if you can donate, please do!!

I'm with FigKitty spare us the conspiracy theories.

4:33 you need to calm down. I first said "Oh my god," indicating that I find this tragic and am worried about the tenants, and their pets and visitors and businesses and precious lifetime belongings. That should be evident.

People ask questions when tragedies occur to try to get a hold on matters. I asked who owns the building because it's part of the story. Maybe I'm a reporter, maybe I'm just a nosy bitch. What's it to you? Or maybe the question is which one of these landlords employs you?

4:53pm here. Actually 4:59pm you need to stop insinuating that one of the building owners you mentioned caused this (without knowing if any of them actually own the building) with your smarmy question and accusing FigKitty of being a shill for one of them, ok?

Your question was inappropriate and irrelevant. WHO FUCKING CARES who owns the building? How is that relevant to this horrific event?

Who's responsible may depend on ownership if the fire is the result of poor maintenance. Seems like a fairly relevant comment.

Its ok to ask who owns the building. Was it a gas explosion? How old is this building? Was unpermitted work going on? Please donate blood if you can. Is this an ancient RS building? Are these buildings poorly maintained because there is no incentive to spend millions fixing them? When is a good time to ask these questions?

Here's a video of the actual building collapsing:

5:13 relax, the people who own the building are gonna have to somehow help the tenants out and deal with this too. It's a tragedy all around.

I did not "bitch about landlords"! I asked a simple question!

In any case, I'm sorry that I asked, because it was certainly not my intention to upset anyone or derail this conversation. For that I apologize. This is my neighborhood, I care very much about the people who live there and their animals and the FDNY and other first responders, believe me.

This is such a tragedy. So sad.

Is smoke reaching to parts or all of Avenue A? Are people able to smell it in their buildings? I've heard reports of people as far north as 30 Rock smelling smoke...

These tenements are all tinderboxes, ready to go up at the least spark.

De Blasio & another city employee report gas work was being done in the building. Con Ed did NOT approve what had been done, so gas was not supposed to be put into that line. (Not saying that it was put into the line, either).

Anon 5:22p ... don't hold your breath on that one, if a building is full of non-market rate tenants, landlord may not be sad.
And I doubt the LL 'has' to help displaced tenants, much less welcome back any one with open arms.

This is why some have asked who owned these buildings.

This problem with old gas pipes is only going to get worse.

The school on 3rd. St. between First and A is now a Red Cross help center. If anyone is worried about friends who may have lived in the buildings they could probably find them there.

The Guardian reports that two employees of North Star Tattoo, "saw workers from a Japanese restaurant that had been on the ground floor of one of the buildings climbing up the fire escape of the burning building and pulling people from windows."

This is an unimaginable tragedy. I wish some of the commenters here would STFU and go crawl into a hole.

My thoughts are with everyone effected in this terrible Incident. I live in brooklyn but I work at Meg on e9th street and consider myself lucky to have been able to evacuate safely. Our shop has been at this location for 21 years and this hits very close to home for us. As I'm sure lots of you will be displaced in hotels for the next few steps of this process i want to offer my home to any pets that need temporary housing. I know lots of hotels and apartment buildings don't allow other members of the family, and I'm here to help. If you have any questions or requests please feel free to directly contact me at Carie@megshops.com

OMG :( I can't believe it. I hope everyone is brought to safety and that there are no fatalities. So scary.

Does anyone know where donations are being accepted for displaced families?

If you're going to do gas works in a building, be fucking competent. I hope the idiots who created this situation get jail time.

I hope nobody's cat was in either of those buildings.

This is why the Fire Department should be privatized.

There was. I know of at least one. And with 24+ units, there must've been more pets trapped & helpless. I'd lose my mind if my pets went that way. :( Horrible. Just horrible.

HOW would privatizing the FDNY had helped with this mess?

"Workers with ConEdison, the gas and electric utility, had visited the Second Avenue site just more than an hour before the suspected explosion to inspect gas work being conducted by a private company, de Blasio said. The new installation did not pass inspection, he said, but there had been no reports of a gas leak at the site."

Red Cross shelter at 3rd St school would not accept my bag of "like new " clothing. They said none of the victims needed clothing?????