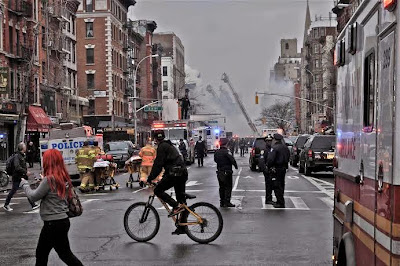 Con Edison is working with fire officials and other agencies at the scene of today’s explosion and building collapse on 2nd Avenue near 7th Street in the East Village. Earlier today, Con Edison personnel were at the location to evaluate work the building plumber was doing inside 121 2nd Ave. in connection with a gas service upgrade. The work failed our inspection for several reasons, including insufficient spacing for the installation of the meter in the basement.

We had no reports of gas odors in the area prior to the fire and explosion. A survey conducted yesterday of the gas mains on the block found no leaks. We continue to work with all agencies on the investigation into the cause, and we are praying for the recovery of all the injured.

Previously
Posted by Grieve at 8:54 PM

The responsibility ultimately lies with Con Ed. If something didn't pass inspection and had to do with a "main" going into the building, Con Ed should have shut off service to the individual building "at the street", which they definitely can do, and then there's no gas going into any part of the building.

There was sufficient gas floating around to ignite and cause a large explosion. That had to come from somewhere. There had to be a gas leak somewhere. Perhaps at the meter or in the main in the street. So, I want to know where it came from. That has to be answered.

Yes, it certainly seems like ConEd is a little sensitive about this . . . and their statements aren't exactly comforting.

I'm not going too defend con ed, however, all these landlord like Avid, Shaoul, Croman etc, etc have been doing illegal renovations on everything from apartments, storefronts, plumbing, gas and electric and so on. My building on 12th had no cooking gas for almost 5 months due to the landlord tooling around with the gas maters. Con Ed caught them and shut down the entire building. The d.o.b. had issued a stop work order, which I've seen that these jerk off lad lords blatantly ignore. I wouldn't be surprised if something like this was too blame. I would be surprised if anyone is held accountable.

I agree with the above poster. The landlords around here constantly hire people who aren't licensed professional to do plumbing and construction work. I am surprised this doesn't happen more often.

Thank you for your coverage on this. it is so heartbreaking. I read one story of someone whose roommate tried to grab their cat but the cat jumped out of her arms and she had to leave. I wonder how many other animals were in the building. It seems all the people got out? You do wonder if the work was not up to par what the steps that were taken next were ... I have not read all the other mainstream articles with whatever details are available yet. In the article I read by someone who lived in the building, she said (but would not go into details) they were having a dispute with the landlord.