About Puebla Mexican Food's abrupt closure, and future at the Essex Street Market 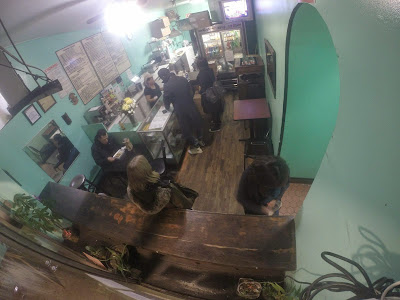 I planned to visit Puebla Mexican Food one last time to pick up a meal, take a few photos for posterity, give owner Irma Marin a hug and say thanks for the many years of good food that I’ve had at her restaurant at 47 First Ave.

However, when I arrived outside Puebla last week, I was sad to find that the place had already been shuttered days ahead of its scheduled March 23 closure. I contacted my neighbor, artist Edward Rivera, who is friendly with the Marin/Marmolejo family to ask about what happened. He was kind enough to set up a phone interview with Marin and her son Ricardo “Ricky” Marmolejo, who helped me translate back and forth from English to Spanish.

While Ricky explained that his mother first decided to just close and retire, the family was touched and excited by the enormous community outreach.

Now there are plans in the works for a Puebla Mexican Food stall at the Essex Street Market.

Ricky said that his mother had appointments with community leaders to help with the paperwork.

I asked Ricky to help translate his mother's words of gratitude to the neighborhood. As Ricky said, she wanted "to thank everyone, all the customers who supported her and loved her food. She wants to reopen to serve the people, and feed them. And that she looks forward to seeing everybody again."

Puebla Mexican Food closes on 1st Avenue; Villacemita opens on Avenue A
Posted by Grieve at 5:00 AM

Anyone know what the timeline for the closing and demolition of the market is? I'd hate for her to open, only to be tossed out again after a couple of months. But good news, I'll make the trek down there to get her amazing breakfast burritos!

I hope it works out at the Essex Street Market! Woohoo! I too was saddened to find them closed earlier than scheduled.

I've also heard from numerous sources that the landlady is crazy. Not surprising. I bet the spaces will remain empty for some time, just like all the other empty spaces in the neighborhood.

Maybe she needs to put up signs like those that used to be in front of the building at 3rd and 2nd. "Crazy Landlord"

oh man, another good one bites the dust -- a nice little family business. Just hope Downtown Bakery stays open, another business that has been here for a long time. Good luck Mrs. Marin.

this made me cry. Irma and Ricky have fed me for decades. When I ordered the same thing too many times, Irma chided me for not branching out ...but I was addicted to their molé and couldn't stray. I'm happy for them that they'll be at the Essex Market and happier still for all of us molé addicts.

:( Too sad. What a loss for the community.

Essex market is going to be open for a few years where it is. I spoke to an owner of a stall a few days ago. It needs some Mexican after the loss of BK Taco...