Here is information gleaned from the most recent Inter-Agency Update:

• Vacate orders remain for 48 residential units in the following buildings: 125 2nd Avenue, and 41 East 7th Street
• Repair work has begun on 41 East 7th Street
• Vacate orders have been lifted for buildings on the East side of 2nd Avenue
• Bellevue Hospital is still treating one patient
• Approximately 3,000 cubic yards of debris searched and removed as of 10 a.m. yesterday
-Estimated to be half of the debris on site
-This represents 46 trailer loads of debris removed
-Each cubic yard weighs approximately one ton

… and from Trash and Vaudeville ... 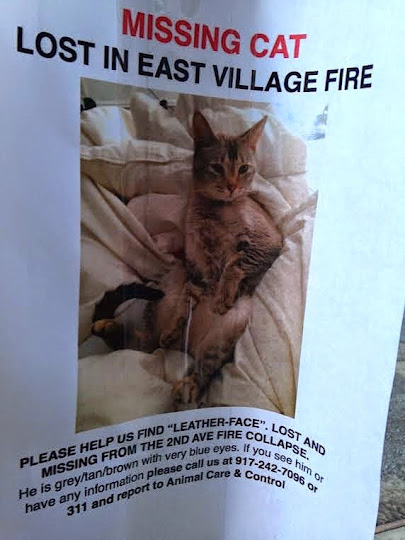 The Daily News has pictures of shredded documents being taken away from landlord Maria Hrynenkos home in Palisades, NY. The McMansion looks much nicer than these buildings where they are renting and hooking up illegal gas lines. Most landlords would never live in the buildings they own, plus they know they can pay a mortgage on a real home for the ridiculous rents they charge. The good news is there are plenty of assets to cover the damages for the victims. My bet is after the lawyers get done with this there will be literally nothing left.

This tragedy is just killing this cat lady's heart. I love dogs, too, of course, but the thing about dogs is that they're often out of the house when you're at work. They're with their dog walker, or at doggy day care, or maybe even with you. Kittycats are homebodies. They nap all day waiting for you to come home, where you hope they are safe and never expect a thing like this to happen.

If we could get even one animal and parent reunion out of this horrific event, it would be a beautiful thing.

I expect the Burp Castle building will be up and running very soon, and the residents that live above can move back in. Just have to to do some cleanup and replace windows. the owners of Jimmys and Porsena did a podcast and gave a shout out to this blog for great updates. http://www.heritageradionetwork.com/category_posts/1194-Special-Update

125 2nd is another story and I don't think that building will be open for quite a while.

STOMP performances are to resume today according to their website. hopefully B & H can open soon.

it's too bad what's going on in the building where the Stage Restaurant is. I hope the residents there get some satisfaction soon because their situation sounds awful.

Grieve, can you maybe create one post or area that will be for ALL the missing pet notices? And (hopefully) for updates on pets reunited with their loved ones? Just a thought.

I love Trash and Vaudeville's spirit of course, but I gotta snicker a little bit at their generous offer.

I love cats too, but wonder how they would react to a fire situation, would they flee or hide? Perhaps this depends of the cat.

Grieve, You are an incredible resource for our community. I want to thank you for your dedication to covering this horrific tragedy, and also for providing a central place where all of us from the neighborhood can sift through the important information we might need. We are so lucky to have you. I wish I could offer you some sort of official award. Truly, thank you!

I believe the family of the landlord and possibly the "son" hurt in the explosion used to own Kiev.

Hey EV, I read the Inter-agency update and didn't see any mention on repair work on 41 E 7th St. Where did you read that?

Just what people need, a pair of skinny jeans. I know they mean well but...

It was on the update dated 3-30 ... I cut-n-paste directly from the document.

@3:24, have you been in T&V lately? That's probably the most flexible, cross-lots-of-peoples'-styles thing they have, except for maybe DM's.

@11:40 AM, Cathryn at Washington Square Park Blog has compiled a post about missing pets and has been staying on top of the subject in general:

Yes, it is. I searched her name last night, and it came up as a former business listing, along with the business set up as a landlord for those addresses.

This is insane. 1 truckload worth a ton? I can't even wrap my mind around that. Its difficult to imagine how much carnage, displacement and sorrow this tragedy created. I am glad though to witness the community banding together by providing charity and time. That is admirable and kind. May those two, young men have peace, wherever they may be.

I think it's very nice of Trash and Vaudeville - they are real EV neighbors. Thank you Richard for the blog posting about the missing pets.

There's A video circulating on you tube where Michael the owner son is injured in the explosion. He shouts out that his moms address is 46 E. 7th St. I wonder if she also resides there? And if that property has been searched.

...but, what? If I lost everything I owned to an explosion and building collapse, I would appreciate new clothes from Trash & Vaudeville. Those are well-made schmattas, even the skinny jeans.