Looking at the former Odessa Cafe and Bar 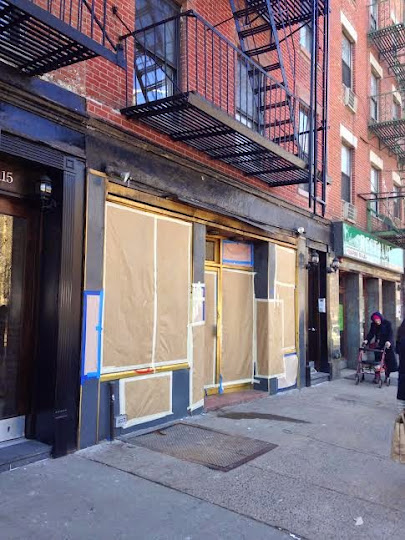 And we can see the new-look storefront that previously housed the Odessa Cafe and Bar here between East Seventh Street and St. Mark's Place.

What's next for the space? Don't really know! (Helpful, yes!)

The applicant was on the August 2014 CB3/SLA agenda, but the item was not heard before the committee (meaning the public didn't have a say in the matter). Paperwork on file with CB3 points to a corporate change, with a Robert C. Payne as the new partner.

On our last Odessa post, a reader left this kinda-sounds-like-the-dude-quoted comment: "I talked to the dude working on it — he said he's 'just making a bar, none of this overly fancy shit.' He seemed like a cool guy."

Other failed concepts for the space included a diner serving comfort food specializing in Nashville Hot Chicken … and a "new American brasserie/bistro."

Anyway, "just … a bar, none of this overly fancy shit" sounds pretty good. 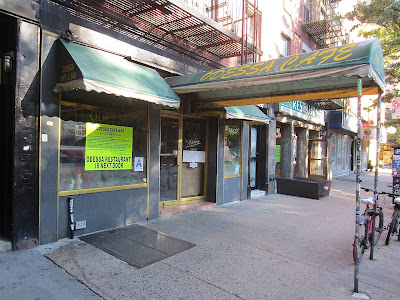 Email ThisBlogThis!Share to TwitterShare to FacebookShare to Pinterest
Labels: 117 Avenue A, Odessa Cafe and Bar

The probability that a low key dive bar opening here is zilch. One does not open anything in today's EV that is not designed to attract the rowdiest bros. It will be "themed" in decor and food and for sure an open facade to let all the noise torture the neighbors.

Case in point: Holiday has a bouncer. The hell?

What's happening to Odessa, you ask? I am moving in.

The asking rent on that space in 20K and hasn't moved a penny in all the time it's been on the market. There's definitely no low key bar going in there.
If there is, I wish them luck.

Agreed. It will be a place suited for the "bros" who dominate this neighborhood with their high pitched yelling during late night, their sense of entitlement as they roam the streets, and the wealth they have amassed, hence what their families have given to them. This will most likely be a place for frat boys and bros. Barf.