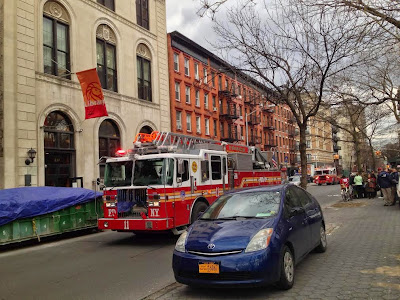 Late this afternoon the Tompkins Square library branch on East 10th Street was evacuated as a precautionary measure.

Word from some readers who happened to be there… workers were doing boiler repairs, and someone smelled gas.

The FDNY was quickly on the scene and gave the all clear. However, the library remained closed to patrons the rest of the day.

The branch is also serving as a reception center for displaced residents of last Thursday's explosion on Second Avenue and East Seventh Street.

I am glad it turned out okay. Has everyone else heard a lot of sirens lately? I was wondering if people are calling in more possible gas leaks given that everyone is on edge at the moment.

Yes! Not sure if it's just that I'm now more aware of them or what though.

I've noticed the sirens too...even a few days before this occurred.

Yeah, the number and frequency of sirens has been crazy! Lots of police and fire coming and going between A and B. Oh. There's another siren now....

The neighborhood has been buzzing with sirens, yes. It's insane, really.

Hearing all the sirens have been giving me a spate of PTSD triggers (started by 9/11).

Anyone else going through the same?