Report: FDNY will need a week to go through 2nd Avenue blast site 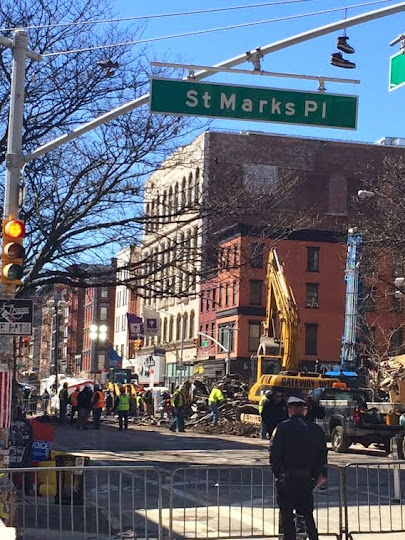 [Photo today by Vinny and O]

Three days after the reported gas explosion jolted Second Avenue and East Seventh Street, emergency responders continue to work 24/7 at the site of the blast that eventually took down three buildings.

The FDNY said it would take a week to go through the ruins, with first responders working around-the-clock while dogs sniff the debris.

“It’s going to be slow and arduous to dig out, search through the rubble,” FDNY Commissioner Dan Nigro said.

#FDNY operations have continued in the #EastVillage throughout the weekend & will continue as long as needed. pic.twitter.com/2WT3HapkfZ

We'll continue to update this story …

It's weird but for all of their insistence that they would be spending a week going through this wreckage with a fine tooth comb, they certainly seemed to be raking it up with heavy machinery when I was there yesterday.

NY1 just reported that a body has been recovered from the wreckage. No further information than that.

Anonymous 2:15, I thought as much. The medical examiner's tent was all sealed up when I was just over there.

Oh no. I can't even begin to imagine losing someone to this. There are no words. R.I.P.

Unfortunately, what we are witnessing is the clearing away of massive piles of rubble that no one has gone through.

What the tenants want is the opportunity to see what remains from the cleared rubble...in whatever location it ends up. There's no way anyone has inspected the vast majority of the debris piles.

We who have experienced great losses want the City to show sensitivity to our situation, and take the debris to a safe location where it can be carefully separated to allow us to [eventually] reclaim what's ours, even if it appears damaged. I strongly feel this can and should be done for us.

I hope some one who is conducting the investigation of the crime scene can communicate the urgency of this situation.

I also believe that if a serious investigation is ongoing, the City should consider the remains of these three buildings to be important enough to handle with great care. We wish to see the wreckage in another location at some point in the future so we may get back some, even pieces of our belongings.