Looks like No. 12 St. Mark's Place has a suitor 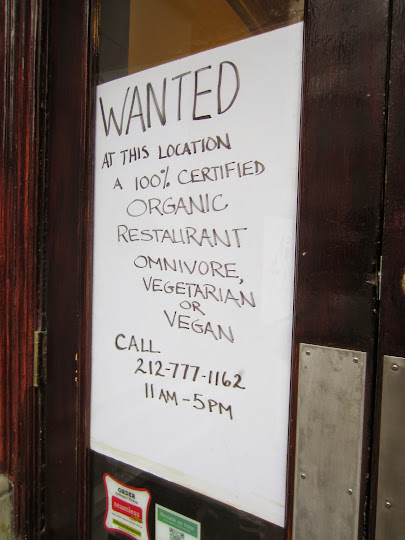 Last month, we spotted the above signs at 12 St. Mark's Place to entice any potential restaurateurs to give this space a try.

And it looks as if it worked: An applicant called Williamsburg Vegan Corp. is on the April CB3/SLA committee agenda for a full liquor license. At this point we don't know anything about the applicant (CB3 hasn't filed the questionnaire with more background just yet.)

Williamsburg Vegan Corp. was on the CB1 docket out in Brooklyn earlier this year for a space at 280 Bedford. (We'll see if any of our Brooklyn friends know more about this.)

No. 12 has also been home to a number of bars-restaurants in recent years, including Hirai Mong, Gama, San Marcos, Siren and @Cafe.
Posted by Grieve at 3:11 PM