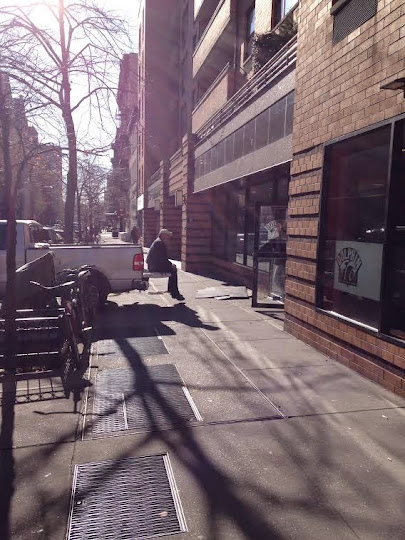 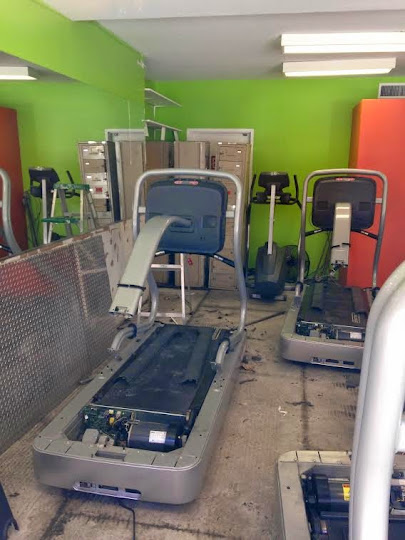 I went there today and one of the managers was there closing up this morning. I asked what happened — he said that only part of the gym space was zoned for commercial use, the rest was for residential use. He said no one had bothered them about that in 15 years, but now they were starting to get complaints from the city so they had to abruptly shut down.

A sign on the door says that Synergy Fitness (with two locations on 14th Street) will honor the Dolphin memberships.

Dolphin Gym hangs it up on Avenue B
Posted by Grieve at 4:40 AM

Ah, the criminal entity known as "the city." Zoning laws are stupid and should be ignored if not repealed.
What's the purpose here other than to put people out of work?

Bill the freedom advocate and antistatist

So the manager knew what he was doing was illegal for 15 years?? And took people's money on the back of that illegality for 15 years?? He deserves everything he gets.

What was the purpose of this law. Let me guess.... A competitor at another gym kicked back a politician to injure this gym.

Interesting that this happens less than a month after NYSC opened at Ave A and 3rd. NYSC is much more expensive, so I don't think Dolphin lost many members to it?

Google reveals a rather shady history for Dolphin, including selling pre-memberships for a branch in Westchester that never opened
(google search on "Dolphin Fitness" "attorney general"). But they're nowhere near as colorful as Synergy, whose founder is in serious jail (life with no parole) for three separate murders.

It's an ugly business.

This is the way they closed their other locations, without notice. I don't believe the lease thing. There is storefront commercial space on the whole block & the building they're in replaced the Anderson theater, which was a commercial space. And, it took 15 years for the landlord to notice?

I was a member since they opened. The membership had been declining over the past few years. A lot of former members have left the neighborhood & people who want & can afford a gym like Crunch have moved in. The equipment was getting older and breaking down and they stopped offering classes.

It was probably Blink that was the final nail in the coffin. They're moderately priced, have new equipment & classes. I know a lot of people who switched to Blink because they were afraid of what just happened-that Dolphin would close and they'd lose their money.

It would be interesting to know what experiences people are having with Synergy.

I belonged to Synergy on W 14 for a number of years before fleeing. Most of the problems with that Synergy, at least according to Yelp, are dubious billing practices. What finally drove me out was when they took in members of another failed gym and it was like someone emptied the bus from Riker's Island at the gym. It went from muscle head joint to full-on thuggish.

I then went to Blink for nearly 2 years. Lots of young entitled douches. They sit on the equipment and instead of actually using it, make you wait while they're texting.

Ah, memories...of the time I had my backpack, with wallet and passport inside, stolen from a locker at that Dolphin location. Good times.

I used to belong to David Barton on Astor, where I paid $120 a month for two years, Prior to that, I patronized NYSC intermittently for seven years, paying up to 75 a month, and Equinox for one year, spending $150 a month. Needless to say, I don't patronize any gyms. Most are traps. The monotony and repetition drove me over the edge. I ended up buying a bike, running at the East Side River Park, and doing weights in my apt. Its a waste of money, especially here in NYC, where you need cash to breathe. Read between the lines.

Is synergy really honoring the members? Does anyone know?

No, Synergy workers act as though they are begrudgingly telling you they don't "have" to but want to help you out, maybe up to 3 months, and you must pay $149. I have 6 months left, the guy behind me had just resigned for 8, I told them to get lost.
The flyer on Dolphin clearly says they would honor the full membership, and mentions no fees. They took money from people till the last minute, it's fraud.

For those who paid their dues and were unable to retrieve the remaining balance of their fees, perhaps contact the better business bureau. Dolphin's business dealings seem shady. I find it suspect how a gym, who has been in existence in the spot for 15 years, somehow suddenly realized they were there illegally. Fishy.

I can confirm that Synergy is not honoring Dolphin contracts. I was a member of 2 other closed Dolphin gyms, the first at 155 East 3rd (originally a "Powerhouse Gym") which closed abruptly and directed me to the Ave B gym (which did honor my contract) which later closed abruptly, directing me to the East 4th gym which also honored my contract. If I had to guess, the sign that Synergy would honor the contracts was put up in good faith.

As someone said before, buy your own excercise equipment, jog in the park and buy your own bike. You can do yoga and pushups at home These gyms all eventually close down and rip you off. This has been going on for decades only now it's getting worse due to the rent escalations. It's like this whole industry is made up of a network of con artists that push their customers to each other every time they collapse and disappear with your money.

More than one of these gyms even had employees stealing customers wallets. And once they get you credit card good luck stopping the charges. I love how the place on 4th st, told people to just go up to 14th St. and they will honor your membership there, as if that's even convenient. I guess they figure you'll get plenty of excersise just schlepping around every time they close.down and send you another ten blocks away to work out.

Has anyone tried the email address posted that is supposedly active as of today? Synergy is obviously not honoring the remaining time on memberships so everyone is really owed a refund, but don't hold your breath.

I wish some of us were disciplined enough to work out at home. I know of a lot of home exercise equipment that has turned into clothing racks.

Agreed. Most gym activities with the exception of certain weight training, can all be done in the home or at the park, weather permitting of course. You can even get in an intensive 20 min workout four days a week, which is just as effective as working out for two hours, checking your emails/Facebook, and looking at your pretty face/body in the mirror, as they do at David Barton. I stayed there for three years. During that time, they raised monthly fees, withdrew the amount of classes, and didn't clean the facilities, which always made it seem I was showering in a dirty, gym shoe with no holes for oxygen. I even had my wallet, laptop, and expensive watch stolen there. At Dolphin, a friend of mine had this things stolen when he went to use the bathroom. Gyms are boring and overrated. Seriously, F Dolphin.

I emailed the email address on the sign demanding a refund for my remaining time and was contacted yesterday afternoon via phone. He said that the arrangement with Synergy is now in place and that it took a while for the news to trickle down to employees (I have not confirmed this with Synergy). After trying to push me into taking the rest of my time at Synergy, he agreed to send me a refund and took my address. So we'll see. I agree with the others that my refund is best put towards a yoga mat and some free weights rather than another gym.

Apparently ludlow fitness is honoring up to 6 months from what I read on their new sign. But I haven't confirmed this.

Synergy and Ludlow are 'honoring' the Dolphin memberships by adding the leftover Dolphin time to a new membership that you buy at their facility. So you have to spend $200 dollars to get some extra months added to your time there. Not for me, am trying to actually get a refund, not too hopeful tho.