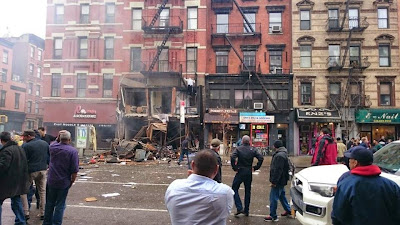 From The New York Times this afternoon:

The investigation into the explosion and fire on Thursday that reduced three buildings in the East Village to rubble and injured more than 19 people is focusing on plumbing and gas work that appears to have been done without a permit at a restaurant on the ground floor of one of the buildings, according to city officials and public records.

The restaurant in question was Sushi Park at 121 Second Ave. Head on over to the article here... it gets a little complicated about who did (or didn't do) what and when.

Updated 6:23 p.m. DNAinfo has more about what may have likely happened at the scene.

Investigators believe a worker may have turned off gas to the original, improperly used pipe, before Con Edison arrived in order to prevent them from discovering that it was being improperly tapped, sources said.

Con Edison workers inspected the new, larger pipe, but once again it did not pass muster, and Con Ed refused to turn on gas to it, and they departed.

Investigators suspect that once they left, a worker went back to the original pipe, and somehow damage the pipe when he turn the gas back on and created the leak, which exploded a short time later.

So my question is.... how does ConEd involve themselves in approving/rejecting gas line work at the site if there are no proper permits for the work ? Why osm't ConEd in cases like that, required to immediately call the DOB and report the UNPERMITTED work ?? WTF is wrong with the city ??

Who is the landlord of this building? The landlord clearly hired the plumbers. Will they be charged with a crime for not getting the proper permits? This is despicable behavior.

At this point there should be a criminal investigation ongoing with the posibility of criminally negligent homicide or other serious charges.

I hope that contractor rots in prison. Because of his sneaky ass, two people are probably dead now. Suicide is too good for him.

Note to all the pro landlord posters on EV.. Look what this landlord just caused...total destruction and probably loss of life and many homeless and others temporarily out of their homes. For all you pro real estate developer and landlord posters who live near this disaster.. get ready for a long period of ongoing construction work and debris removal. They will start by removing the rubble and then your buildings will be shaking from pounding the building supports into the ground and then starting at 8am every day for months you will wake up to construction noise that will go on every day. Let's see how much you love real estate develoers after this !

The landlord of this building needs to be arrested. Tampering with gas lines is reprehensible.

Owner of the building is a local-ish family (the Hrynenkos). I think the same Hrynenko (Michael) behind Kiev.

Hate to say it, but I'm more worried about these small-time, local-ish landlords than I am about the big guys. It seems unlikely Icon et al would screw up this badly - they have enough resources to hire reputable contractors.

Still hoping for the best for the two men still missing.

The Times had a small piece re: plumber. The work he did was 6 months ago, but magically he was there rt before the blast. The landlord's son, in his 20's? was also there and critically injured. The plumber is from the Bronx and is already being charged with bribing inspectors for jobs he has done in the past.

So the contractor is one of the people charged in this investigation. Maybe the city should be checking all of the buildings the contractors charged have worked on.

Quote from DA's investigation report:
"Our investigation revealed a widespread network of corruption in the construction industry and among the City workers charged with keeping that industry safe,” said DOI Commissioner Mark G. Peters. “We found that these 16 City employees, including several senior supervisory staff, took bribes to clear code violations including some that presented real safety threats. Today’s arrests shows that the City and law enforcement have zero tolerance for criminal conduct that undermines the City’s mandate to protect its citizens.”
That was Feb 15 of this year. I sincerely hope all of the buildings involved in this sting are being rechecked, now. They need to be working day and night and weekends to insure the safety of the residents that pay them.

Why is is that Con Edison does not have a branch of workers in place specifically to install and upgrade gas lines in NYC? Why is it left to private contractors to do? That is a practice that should be immediately outlawed. At least the Con Ed workers would know what they're doing, and not cut corners. And agreed, the landlord and the contractor need to be prosecuted to the fullest extent of the law.

I do agree with figKitty. I'm certainly no lover of landlords, and if this landlord was criminally negligent she and/or the contractor should be prosecuted.
But these local mom'n'pop landlords (and this was one) are getting squeezed so much by the city, I can (almost) understand them trying to cut corners, and I can definitely understand them selling out to the highly capitalized big boys like Icon and their ilk.

Obviously the probable loss of life here is the most important thing, but I really shudder to imagine what will take the place of these buildings. I hope zoning/air rights prevent some Karl Fischer monstrosity from getting built.