[Updated] Ess-A-Bagel has closed for now on 1st Avenue 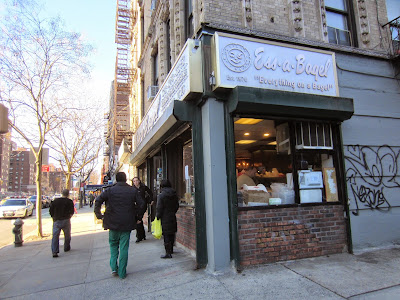 Here's a video that someone from the #SaveNYC group made from inside the shop after the doors closed...

To recap the recap on the situation here:

As the Town & Village Blog first reported on Jan. 16, Ess-a-Bagel was being forced out of its longtime home. However, according to a statement that the landlord's reps sent us, Ess-A-Bagel’s owners "repeatedly refused to meet us between their below-market rent and current market value."

However, they will be reopening nearby one of these days...

Ess-a-Bagel downtown will be opening again soon at a location nearby! Watch this space for details. #essabagel

As to where… owner David Wilpon told Town & Village "that there were a couple of possibilities, but declined to elaborate, citing confidentiality agreements." Last Monday, an Ess-A-Bagel worker "said even he didn’t know where the business was moving or when it would reopen."

According to Town & Village, Ess-A-Bagel has expressed interest in the now-closed laundromat space the next block up… 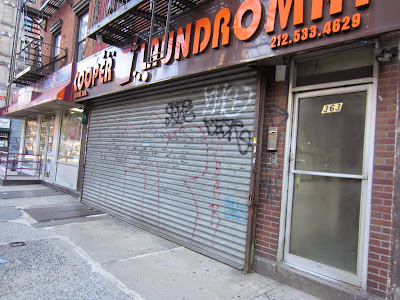 As for the now-closed Ess-A space at 359 First Ave. ... a Bank of America branch is in the works.

Meanwhile, because this always comes up on any First Avenue bagel posts… here are two other bagel shops on the west side of First Avenue between 14th Street and 21st … 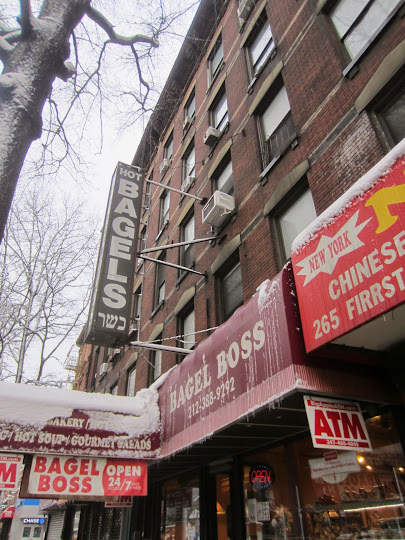 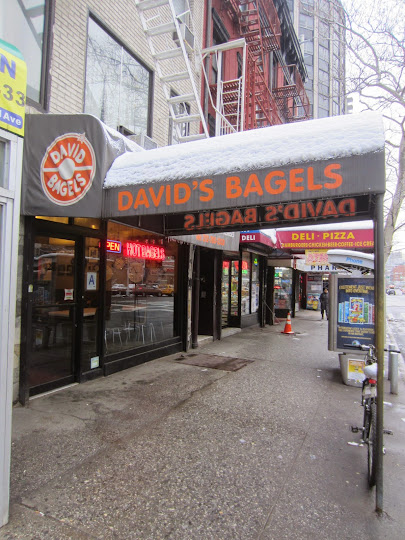 For further reading: Jeremiah Moss stops by for a last bagel at this location.

1 week left for Ess-A-Bagel at its current 1st Avenue location
Posted by Grieve at 4:50 AM

You've been covering a lot outside the East Village lately, no?

Ess-a-Bagel has a very unique product. I've never had a bagel quite like theirs anywhere. That said, Bagel Boss has a high quality Kosher deli selection, and their bagels and baked goods are top notch. David's bakes a more than edible bagel as well.

And since none of these establishments is actually IN the East Village, it's left to Tompkins Sq. Bagels and Black Seed to battle it out.

Hope they take the dark wood paneling with them for the new space, because god knows the new tenants are going to gut it.

Don't be so nitpicky, the whole area is Midtown South now. Pretty soon the Central Committee will need to rename the blog MS Grieve once the EV disappears forever. Grieve is not a monster, he's just ahead of the curve.

If they move to the laundromat, could they use one of the washing machines to boil the bagels? And another to mix the dough?

Just do it. Or don't. Enough with this cliffhanger nonsense. I love ess-a-bagel but goddamn it, it's just a bagel shop. Everyone's got their own lives and problems.

I was in there Saturday and overheard one of the workers talking to an old timer.

The worker said he's been there for 39 years so maybe he's one of the owners? Either way, I'm pretty sure I heard him say that they're hoping to sign a lease on Wednesday nearby and itll be a 12 week build out to get a space ready.

I was hoping they'd keep the old school style with the wood and chandeliers but I think he also said that everything was gonna be brand new.

I liked walking by here at night when it was closed and watching their cat climbing all over the bagel bins and sleeping on top of the bagel boiler. Luckily I don't have cat allergies but if you ever found a hair in your bagel at least now you know where it came from.

More nonsense and fear about cats in food establishments. You'll be fine, and even if you had a cat allergy you'd be fine. Seriously, have you ever heard of anyone getting sick from a pet allergy they obtained from a bodega or wherever? I'll take pet dander or whatever nonsense people think is going to kill them over rat sh*t any day. And if you think anyplace in NYC is immune from rats and mice you're dead wrong. I've been in the kitchens of some of the finest and most expensive restaurants in this city and they all battle vermin everyday.

David- one of the owners- was struck by a car on 1st Avenue and 21st Street today.

I think we should start a thing where for 365 straight days after that fucking bank opens, someone different goes each night undercover of darkness and just takes a shit in front it.

Eh, gonna vote down the plan to poop the banks. Chances are some poor sap who works there, whose opinion no one at corporate would ever listen to, would be forced to clean it up. It's sort of like when those yahoos associated with OWS decided to empty a port-a-potty tank all over the entranceway and ATM of a bank down near Wall Street. Did they think Jaime Dimon was going to come down from on high with a slop-bucket and get to work on it?

About that wood paneling... I distinctly remember them renovating the store, probably in the late '70's when they installed the paneling and the chandeliers. Can't remember what decor preceded it, but do remember the drug store in that location before ess-a opened.

And Grieve... sorry for busting your chops about being IN or OUT of the EV, but Stuy Town residents always liked to hold on to our own neighborhood identity.

The banks all have lots of security at night now. Mostly to keep the homeless out of the ATMs. I noticed it more this winter than before. Homeless sleeping in the ATM area. So maybe try something else.

I stopped going there in the 80s because there were always roaches crawling around the bagel bins. Not to mention the long lines and surly service.

True, it's a neighborhood institution, and no good ever came out of another bank branch displacing a local mom 'n pop store, but I can't say I'll miss them.

Understood! Know enough people who go there on a regular basis to pass along the news/updates…

When Florence left the day to day operations of the store, there was a crew in there for a number of years that was (surprisingly) more than surly. It seems that it got better in there in past few years, but for a while, I stopped going in there due to the bullshit.

Interestingly tho, the bagels have never changed.

The people who worked there were surly? Well thank goodness it's closing then! I mean, when you serve me a bagel I expect you to have good vibes and endorphoins coming out the ying-yang! WHO DARES BE SURLY IN MY PRESENCE???

You can go to any of the budding millennial restaurants and get artisanal, finger-snapping service -- on your phone!

PS: love the sign for the Chinese restaurant. 265 Firrst (Avenue). A classic.

Tal Bagel is taking over the old Childrens Center? That's interesting because in one article Tal was supposedly taking over Ess-A-bagels location, then in another article a real estate "expert" said the Childrens Center space would be too small for Ess-A-Bagel, even though it it very deep and looked much bigger than Ess-A-Bagels corner store. Or maybe they were talking about the Frenchmans space? In which case Ess-A-Bagel is out of luck since there are no larger spaces available in the area than this one right now.

For what its worth Tal has better service and at least will be nicer than Ess, but I doubt that the bagels will be as good.

And yes Ess was surly even by NY standards, sometmes they acted insulted to be taking your order, as if you didn't know ther secret handshake. Of course the minute a nice young blond woman walked in attitudes changed, their million watt smiles would suddenly shine, as if these grubby sandwich slingers even had a half a chance. And the lines were really slow, even without the toaster.

What kept them going so long was that the bagels were good, surly service, slow lines, cramped space, cat hairs and all.

Is it wrong that I like the Bagels from Key-Food??