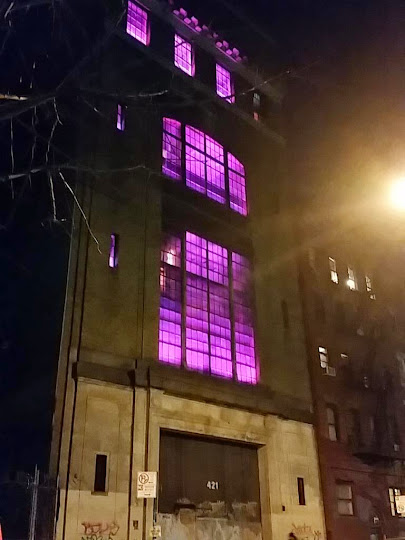 The other day we noted that there is a big event taking place at the incoming exhibition space for the Brant Foundation on East Sixth Street.

Crews have been busy coming and going from the building's back entrance on East Seventh Street between Avenue A and First Avenue, where two high-powered CAT generators have been stationed since March 19. According to a security guard, the event is for Dom Pérignon tomorrow night.

All told, the party-related activities at the Brant building, which has been cast in a pinkish glow inside the last few nights, will last 11 days, per the signs posted on the building at 421 E. Sixth St. 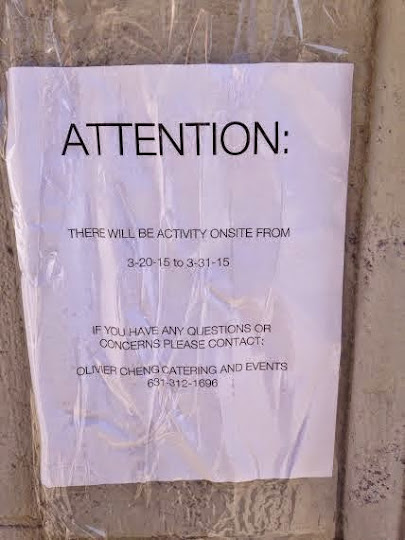 Several neighbors have grumbled about all this, from 11 days of reserved parking on the street to the often-noisy generators.

A few commenters to our post on Monday thought we should all just mind our own business.

He's probably having some kind of celebration / party in his new space. People need to get lives and mind their business. Now the guy is getting written up on blogs?

Peter Brant is bringing much-needed class and sophistication to this neighborhood. If you want your squats back move to Detroit. Echoing the previous commenter: get lives just because you can't afford champagne!

Some of these comments prompted a resident on East Seventh Street "to demonstrate what a racket they're making."

To the reader: "I'm excited Brant has taken over the space and I'm sure he'll do lovely things for the community, but those babies are loud! I live right in front of where [the generators are] parked and it's very loud up here on the uppers floors. I'm attaching a video of the noise the trucks make — this might set straight some of the commenters who think this is an overreaction!"

Previously on EV Grieve:
Neighbors curious about the 11 days of activity at Peter Brant's exhibition space on East 6th Street
Posted by Grieve at 4:32 AM

Regarding the generators on 7th Street - inquiring minds might be interested to know that permission for them did NOT go through DOT.

This is a project approved directly by Emill Lissauer, Director of the Mayor's Office. Try contacting them - and they won't answer a single question only tell you that you can send an email. Then, you can wait for the answer - presumably to be received on April Fools Day.

I can see using the interior lighting to create a light show that will be visible through the street side windows.

Yes! Gel lights are a disgusting sign of the times circa 1984. Idiots.

Hey production company, you don't need to be self-defensive for taking his money. The lights aren't the problem, the takeover of two streets for 15 days is a problem. Parking massive generators in a residential area is a problem. The lack of accountability is a problem. Of course, why should the rich go through normal channels? Idiot.

How late are the generators running? How easily can they be shut off? I assume this is a temporary solution until the building is re-wired with more juice. Still I'm glad I do not live next to it and my heart and ears feel for they that do.

I am glad this has become an art space, considering the alternative options.

Only hope is that there will be events/exhbitions for the public.

After some digging, here is some info:

I encourage everyone to call and email him to let him know what a nuisance the generators have been - his phone is 718-999-7061 and his email is darryl.chalmers@fdny.nyc.gov

I stopped in at the 9th Precinct yesterday to discuss the situation and they were VERY unhelpful. Their only suggestion was to call 311 at the time of the disturbance, and they might be able to dispatch a car if there was one available.

I never knew the rich could take up an entire block of parking spaces for two weeks...whodathunk?

I live in the neighborhood and have for almost 10 years. Let's not forget: we live in Manhattan. It's not in the woods. While I'm not familiar with the noise the generators are making, these things are going to happen. This is for a finite amount of time. It's not like the fans under apartments at the 7-11. It's also worth noting that no matter what, some people are always going to complain. IMHO, sometimes it's warranted and sometimes it's just people who complain no matter what all the time.

The noise and the parking is a problem. Parking is very difficult here how do they get to take up half of 6th street. Now we have to get ready for the summer roof parties.

I want to be annoyed this is happening- those monster trucks are right in front of my building, That being said- they are creating this beautiful white noise that drowns out all the woo hoos and the fuck yous that drift up to me from the street at 4am so perfectly that I think I will miss them when they are gone.