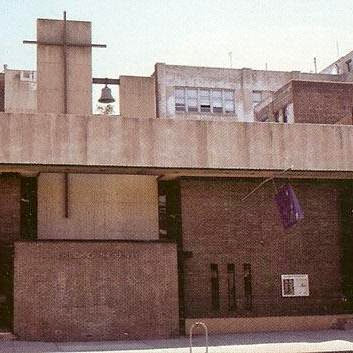 The Church of the Nativity on Second Avenue between East Second Street and East Third Street is on Cardinal Timothy M. Dolan's closure list as the Roman Catholic Archdiocese of New York undergoes a massive reorganization.

Under the plan, the church, founded in 1832, would merge with Most Holy Redeemer on East Third Street between Avenue A and Avenue B.

Nativity parishioners continue their efforts to save the church from a sale and subsequent demolition...

There's a meeting tonight with a representative from the Archdiocese... via the EVG inbox...

This will be the FIRST "official" parish meeting regarding the merger since the announcement was made on November 2, 2014.

Every meeting and discussion we (the parishioners) have had so far has taken place outside of the church and in the social hall because we weren't allowed to have an open discussion inside our church.

This is an opportunity to ask important questions and let them know why our church should remain open. It’s imperative that we all attend so that we may be taken seriously.

Previously on EV Grieve:
Parishioners fight to save the Church of the Nativity on 2nd Avenue
Posted by Grieve at 12:13 PM

I live around the corner from Nativity, and have for 25 years or so. I really don't find it that burdensome if it did close because I already re-located to Old St. Pat's. I do feel sorry for the few old timers left who spent a lifetime going to that parish (not sure when the current ugly building was constructed, but pics of old church bldg. were attractive). As far as a parish is concerned--very miniscule English speaking congregation, much larger Latino congregation. I just feel sorry for the seniors whi live very close by. Kudos to the Redemptorist Fathers from Holy Redeemer who have taken on the parish in the interim--it's a struggle for them personnel wise.

possibly the most hideous building in the neighborhood, good riddance

The Church of the Most Holy Redeemer on 3rd Street is a lovely building and I'm sure it would appreciate more parishioners from the neighborhood.

amen to the most ugly building the in the neighborhood sentiment. One of the few spaces in the EV which would actually be improved by a transformation into a soulless glass tower.

I'm a parishioner at Nativity. I relocated from Old St Pat's because I found it too conservative (Fr Jonathan is a commentator for Fox News). Sadly, I don't speak Spanish, but have never found that a hindrance in worshiping at nativity. It's lovely to celebrate Our Lady of Guadalupe (Mexico) and Our Lady de Altagracia (DR) with my neighbors. It's true, it's not a pretty church, in fact, it's fairly hideous, but that makes me love it all the more. It is the spirit of the community that makes it beautiful!

Wow, I love this building's brutalist architecture, I'm apparently in the minority here, so much so that when I posted earlier it must have been seen as not worthy of showing up.

Wow, I love this building's brutalist architecture, I'm apparently in the minority here, so much so that when I posted earlier it must have been seen as not worthy of showing up.

Glad you posted again; I too am a fan of "the new brutalism," having first become aware of it as an architecture movement when I first saw the Yale University Art & Architecture [A&A] building, also affectionately known as "the matzoh factory"owing to its textured exterior masonry.

Thanks Scuba Diva, that makes two of us, any other architecture fans what to come out of the closet?

I'm a big fan of Brutlist architecture too, it's such a throwback to buildings of the 60's and evokes a time when functionality was more valued. The raw concrete and rough exterior finishes are a nice break from the artificial glass facades an bland brick buildings of today. As "ugly" as some people may think this is, it's preferabe to all these new buildings where the front looks like the back. At least with a Brutalist desgn you always know you are looking at the front and not at their rear end.

The "ugly" building was built by Nativity's parishioners in the late 60s, early 70s after a fire burned down the former church building. Parishioners worked hard to rebuild their parish and today they continue to fight for their home away from home as their is no legitimate reason for the closure.