Lift off: Jay-Z will headline the first show at the all-new Webster Hall 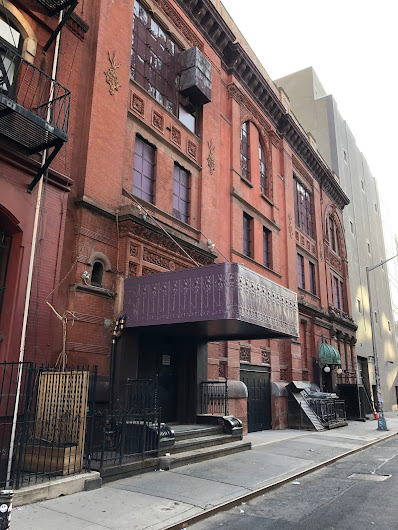 There have been rumors that a big-name act (the National! the Strokes! the Yeah Yeah Yeahs!) would christen the all-new Webster Hall when it reopened this month.

Webster Hall made the big announcement this morning...

Per a Webster Hall press release:

JAY-Z will officially re-open the iconic Webster Hall on Friday, April 26m following the completion of a comprehensive renovation to modernize the historic concert venue. The ‘B-Sides 2’ show is billed for Day 1 fans and will be JAY-Z’s first time playing the legendary venue ...

A limited number of tickets will be made available for purchase to American Express® Card Members beginning Thursday, April 18 at 10 a.m. through 10 p.m. The general public on sale begins Friday, April 19 at 11 a.m. and tickets are available at Ticketmaster.com.

As previously reported, Webster Hall is now owned by BSE Global and The Bowery Presents, who's booking the acts at the venue.

Previously on EV Grieve:
More details emerge about the revamped Webster Hall, returning this spring with Patti Smith, Sharon Van Etten and Royal Trux
Posted by Grieve at 8:15 AM

Oh, shit, here we go again: noise and crowds and drunks aplenty. The peace & quiet was great while it lasted.

"Oh, shit, here we go again: noise and crowds and drunks aplenty. The peace & quiet was great while it lasted."

You sound like a lot of fun! How about don't live in the east village if people having fun and making noise bothers you. Plenty of room in the upper west.

Remember back in 2016 when the Governor Balls was canceled due to bad weather, and Kanye West announced at the last minute that he was going to perform at Webster Hell, and sudden;y 4000 people showed up, screaming, pushing and shoving and closing down all the surrounding streets at 1AM? Kanye never did perform, due to “security issues,” He just drove around the block in his car with Kim as people lost their minds. I doubt most people will go that crazy over Jay-Z, but you never know.

There is not plenty of room in the upper west.

@11:49am: Yes, I *am* a lot of fun, and I don't have to be drunk or loud to be fun! And I've lived here since BEFORE "Webster Hall" was a shit-show, so I'm not going anywhere. This used to be a very nice neighborhood, before it was given over to the kiddies and the trendoid never-adulting bro's.

I wonder if the Nightlife Mayor will be there to cut a ceremonial ribbon, and then maybe clean up the first vomit of the evening at Webster?

I think Webster Hall should relocate to the UWS, since you claim there's a lot of space there. And they can take the Moxy hotel with them.