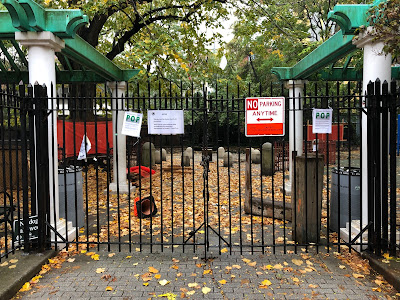 The reconstruction of Joseph C. Sauer Park is underway here on 12th Street between Avenue A and Avenue B... 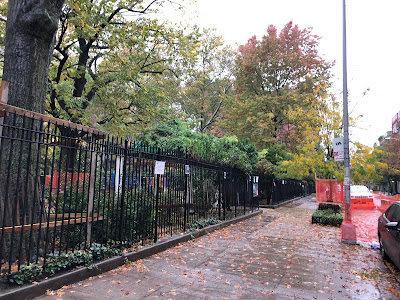 We've been reporting on this in recent weeks (see links below)... 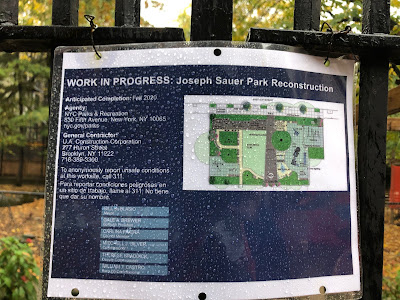 To recap: As previously reported, while the $4 million redesign of the Park was welcome, local residents were unhappy with the Parks Department's plan to install a 4-foot fence here upon completion of the rehab. According to a petition that was in circulation, the shorter fence would "make the park less secure and an unsafe place for children to use."

However, on Oct. 18, local Assemblymember Harvey Epstein and City Councilmember Carlina Rivera announced a deal with the city that would keep the fence at 8 feet.

The renovations — part of Mayor de Blasio’s Community Parks Initiative — have a completion date of October 2020, per the Park's website.

Pols: Fence at Joseph C. Sauer Park on 12th Street will remain at 8 feet
Posted by Grieve at 4:12 AM

The park has been closed for a week. Workers were visible on Monday and Friday only.

Even with the promise from the Parks Dept, the 12th Street Block Association is keeping an eye on the 8' fence to make sure it is not "accidentally" removed. Other neighborhoods have had the same conflict regarding the removal of fences which protect their parks at night. I know I won't breathe a sigh of relief until the day the our park reopens with this fence still in place.

The workers on Monday were getting stuff ready for the guys on Friday. They will come back in a couple weeks to finish what they did on Friday.

A year ? What could they possible be doing that would take an entire year.

i watched the tompkins playgrounds get renovated. weeks went by without anyone working there. it was probably two to three weeks of people hours/work spread out over an entire year. there's absolutely zero reason for these playgrounds to be closed an entire year. it's just clearly not a priority for the city and it's really unfortunate.

Nobody worked at the park today

@1:30pm: What could they be doing? Collecting overtime, as far as I can see! I'm sure they have very nice pensions, too.