A petition to keep the 8-foot fence at Joseph C. Sauer Park on 12th Street 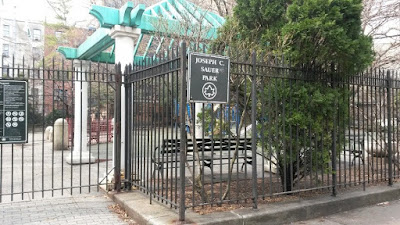 As part of the Community Parks Initiative, Joseph C. Sauer Park is scheduled to undergo a redesign on 12th Street between Avenue A and Avenue B.

However welcome most of the changes are, there is one sticking point: the new (shorter) fence the Parks Department plans to install.

So park organizers have launched a petition to save their fence... 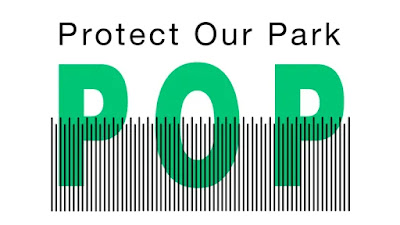 Dear neighbors, friends and everyone who loves Joseph C. Sauer Park. As many of you may already know the Parks Department will close our park for renovations which should last a full year. Once complete the park will feature a new design with many requested features.

Part of the plan however is to remove the current 8 foot high fence and replace it with a 4 foot fence, which will make the park less secure and an unsafe place for children to use.

We are asking for your help to stop the Parks Department from removing the only proven means of securing our park at night. We have the backing of Assemblyman Harvey Epstein, Councilwoman Carlina Rivera and our Community Board.

Some history: "Sauer Park is one of nine playgrounds that were built by the Parks Department through the War Memorial Fund, and were opened simultaneously on July 15, 1934." There were subsequent additions here in 1965, 1989 and 1992.

Find the petition at this link.
Posted by Grieve at 4:31 AM

I think the Parks Department is becoming unhinged. They were to provide more accessible park space during the closure of the East River Park, not less. And it's been more than a year and the playground over at Tompkins is still closed. Can we trust them?

Members of the 12th Street Block Association created this petition after attending many meetings with the Parks Department for nearly two years. We have repeatedly requested that the 8 foot fence stay for security reasons. We are residents of this and nearby blocks and many of us have children which use this park daily yet the Parks Dept refuses to listen. Please sign our petition and help us get the park which will best serve our community.

Who is running Parks Department these days? Have the inmates taken over the asylum?

How does a 4 foot fence make it "an unsafe place for children to use" exactly? I don't get it.

@10:15 AM
the park / playground is locked every evening and has bee since the last renovation in the 1990's. A 4 ft fence will give easy access to anyone during the nights. If I have to spell it out, drug users leaving syringes, people using the park to defecate, etc... The 8 foot has kept the park safe and clean for over 25 years. The park is in need of renovation, we are exciting about the changes however the big issue is the fence, please sign our petition. http://chng.it/JZKgTLC64t

@10:15am: Is that a serious question? You don't see the possibility of child molesters or kidnappers having easy access via a 4-foot high fence that they don't have via an 8-foot high fence? Much less the safety and integrity of the park space at ALL hours and especially overnight.

Drunks & druggies can easily get over a 4-foot fence; not so easily over an 8-foot fence.

There's a movement afoot that certain advocacy groups are pushing that believes that children of color would identify tall fences as prison bars. And to these groups... that's racist. We're talking children... What do children know about prison? But what every EV resident knows about the parks is that low fences invite crime/vandalism/
misuse of space. I believe they tried this at TSP. It's just too easy to snatch a kid over a 4' fence. This is just another horrible move by Parks - the long arm of Death-of-the-City de Blasio.

I always thought Mr. Sauer was a WWII vet, but here's some info on him from the Parks Dept. page:

"World War I soldier Joseph C. Sauer (1896-1918) was born in Pittsburgh, Pennsylvania. His family moved to the Lower East Side of New York City when he was an infant. Sauer graduated from the Redemptorist Parochial School (Note: it was the school for the Church of the Most Holy Redeemer on East 3rd Strret - Gojira) and excelled in athletics, especially track. He worked for the Western Electric Company, and following the death of his grandfather, Sauer and his mother took over the family’s basket manufacturing business. He worked there until he entered the United States Army on September 28, 1917.

At Camp Upton on Long Island, Sauer was appointed a bugler and assigned to Company F, 308th Infantry, 77th Division. On April 6, 1918, Sauer sailed for France where he fought on the Vesle, the St. Mihiel, and the Meuse Argonne. On October 7 a section of his company was cut off in the Forest of the Argonne. One of the volunteers who crawled through the forest to reach the rest of the company, Sauer was shot in both legs by German soldiers, and died of his wounds several days later. For his act of bravery, he was awarded the Distinguished Service Cross."

While one can understand the aesthetics and symbolism of openness and transparency such a lower fence is meant to evoke, this is a stupid mistake that elevates idealism over common sense. A lower fence will invite after hours mischief and misuse. Periodically, IV drug users still sneak into the playground to get high at night and without an evening impediment to their access that problem will dramatically worsen. Nothing like needles and toddlers sharing space.

Having a fence at its present height will also protect the city against unauthorized, disruptive and perhaps destructive late night use as well as unnecessary wear on the capital investment they are making.

I urge folks to please sign the petition (linked to in article).

Thanks to all who have signed our petition so far please continue to spread the link and awareness.

If it’s like the renovations at Tompkins, it’s because there are two people working there for a few hours once every few weeks. Or so it seemed. Definitely not a priority for the parks dept. seems like they are dragging three weeks of work out over a whole year...

Anyone know when they plan on closing the playground?

Most attacks, burglaries/robberies (home and personal attacks) are made by drug addicts needing money for their fix, and also by the desperate homeless. An easily accessible park will attract- more of them- to the neighborhood. Making it more dangerous.