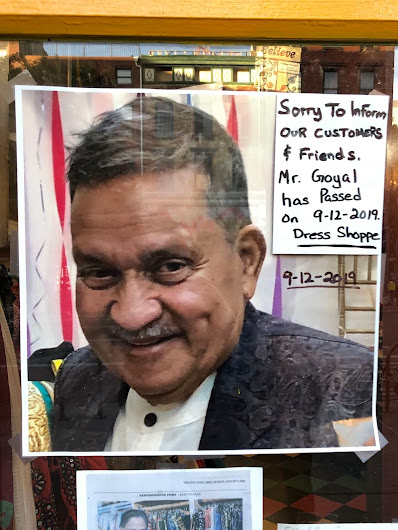 Purushottam Goyal, who along with his wife Saroj have owned and operated Dress Shoppe II on Second Avenue these past 18 years, died on Sept. 12. He was in his early 70s.

A tribute to him is on the front door of the shop that opened here in 2001 between Fourth Street and Fifth Street.

EVG reader Marty recently shared this: "I stopped by the Dress Shoppe ... and was very sad to hear that Purushottam Goyal, its wonderful shopkeeper, died. His wife Saroj Goyal and her son are running the store, but with heavy hearts."

The Goyals, who had been married for nearly 50 years, were the subject of this feature in The New York Times in August 2016...

The owner, Purushottam Goyal, has a weakness for the past, and for nearly four decades he has filled the store with intriguing relics. Amid the tunics, scarves and batik blankets, you can find 100-year-old saris made with silver thread, wooden cowbells, old kerosene lamps and vintage radios. (At home, he has a yellow taxicab from 1929.)

Mr. Goyal was born in Delhi, India, the youngest of 18 children. Before he came to New York, he worked in his parents’ textile shop and, briefly, as a customs official. In 1978, he opened a shop on Broadway. He did not have the money for a sign, he said, so he painted over part of the old one: Smart Dress Shoppe became Dress Shoppe.

In 2001, that building was sold, and the store moved to its present location. Dress Shoppe became Dress Shoppe II.

He also shared his business philosophy: "Just relax, and if you feel something, buy it. We want only happy money."
Posted by Grieve at 5:30 AM

A very sweet man who will be missed. Apart from his family he left a 1920's yellow taxi. I got to see it once outside his shop.

Very sad news as I was just about to visit him for my incense stock-up. A genuinely amazing person. People like this have kept me in the neighborhood and I was excited to hear he wasn't closing down last year. I'll dearly miss his postcards he sends his customers. Best wished to his lovely wife.

"If you want to live longer Be Romantic." Goyal's words on a postcard he sent me. RIP sweet man.