Renovation tour: A look at the under-construction Irving Plaza 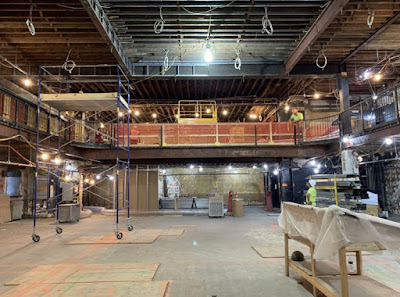 Irving Plaza, the 1,200-capacity music venue on Irving Place and 15th Street, closed back in July for an eight-month rehab.

For anyone interested in renovation updates, the Irving Plaza Instagram account (where we spotted this top photo) is now promising weekly updates ahead of its reopening in the first quarter of 2020.

As for the renovations, here's Billboard with the story from this past April:

[T]he renovations at Irving Plaza will be overseen by Live Nation clubs and theaters division and include revamps of the lobby area and the music hall, new bars on all levels, the addition of a downstairs VIP lounge and remodeling of the mezzanine including a new box-seating section configuration.

The venue has been in use for concerts the past 41 years. The Polish Army Veterans of America have owned the building since 1948. Here's more history via the Irving Plaza website:

Over the next few decades Irving Plaza would serve as a union meeting house, a performance space for folk dance troupes, and a Polish Army Veteran community center, as well as a venue for the Peoples Songs Hootenannies with Pete Seeger and Woody Guthrie.

Previously on EV Grieve:
Irving Plaza is now closed for renovations
Posted by Grieve at 4:00 AM