I'll be there for you? 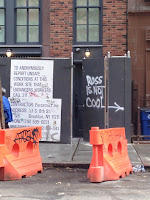 A man, described in media reports as a homeless ex-convict, was caught with a brick in the backyard of the home linked to David Schwimmer on Sixth Street between First Avenue and Second Avenue.

Police caught Eric Rosa, 29, lurking in the backyard of the actor’s E. Sixth Street home near First Ave. about 12:30 a.m., allegedly trying to break in with the brick.

It's not entirely clear if the actor still lives in this townhouse. The Post reported in 2017 that Schwimmer was house-hunting elsewhere in the neighborhood following the split from his wife.

I wonder how that person got into the back yard. My apt is near that backyard, and I believe the only way to get on that side of the row/block of buildings is by scaling down a fire escape from on of the neighboring buildings??

I am nowhere near that block, but 2 weeks ago a guy broke into a rooftop apartment of a brownstone on my block; fortunately police arrested the guy, but the question then was the same: how did he get onto the roof? Could be via fire escapes in adjacent buildings, etc.

Bottom line: Don't get complacent, people. In fact, the more you paid for your place, the more likely someone is to decide you have something worth stealing inside.