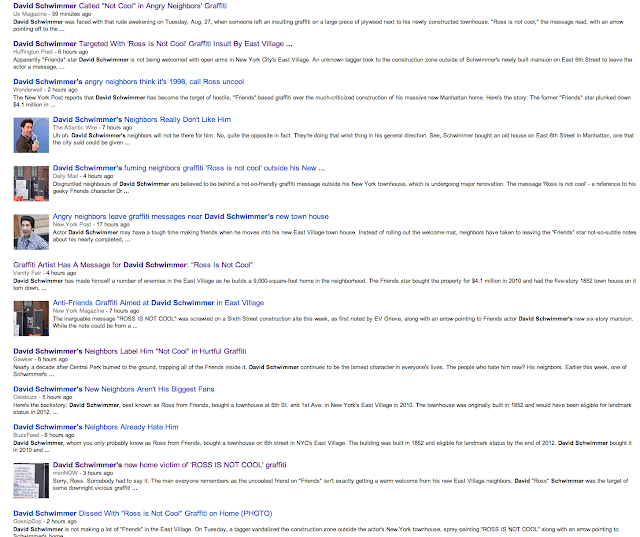 And in the last 36 hours or so, there was some media interest in the EVG post about someone painting "Ross is not cool" on the plywood outside David Schwimmer's new home on East Sixth Street. (Supermarket tablet The Globe will have it in its next print edition. Really.)

And because several people asked: We did not receive any compensation for the photo, which came from Marc, a neighbor. (Also, no one actually offered us money for the shot.)

Also, while the story did attract media attention, the number of page views paled in comparison to high-profile posts here that featured topless women. Like this one. Or this one. So, the takeaway? Celebrity sells, but you need boobs apparently.
Posted by Grieve at 5:00 AM

Email ThisBlogThis!Share to TwitterShare to FacebookShare to Pinterest
Labels: David Schwimmer, fun with the media, navelgazing

HA! I was just going to point that out to you but never mind. Grieve with tha super breaking shit that matters! Again!

I bet Schwimmer has man-boobs by now.

Schwimmer only got the Friends gig because a relative, I think his mother, was casting the show. Talk about stepping in it.

All evidence I find points to David's mom being a family-law attorney, not a casting agent. But please, let's keep making ludicrous exaggerations and telling lies about the man that turn normal, "hey, maybe we should leave this guy alone" people into outright Schwimmer defenders. He's just another rich dude building a fancy mansion. Who fucking cares? Either harass everyone or no one.

Certainly we can agree that there is something about his 'pweeze someone hug me' persona that makes one want to smash him a proper one.

Anon 7:15, YES and most would also agree that Friends was second only to SATC in sending out the siren call for douches everywhere to move to NYC. I don't support the harassment of anyone but facts are facts.