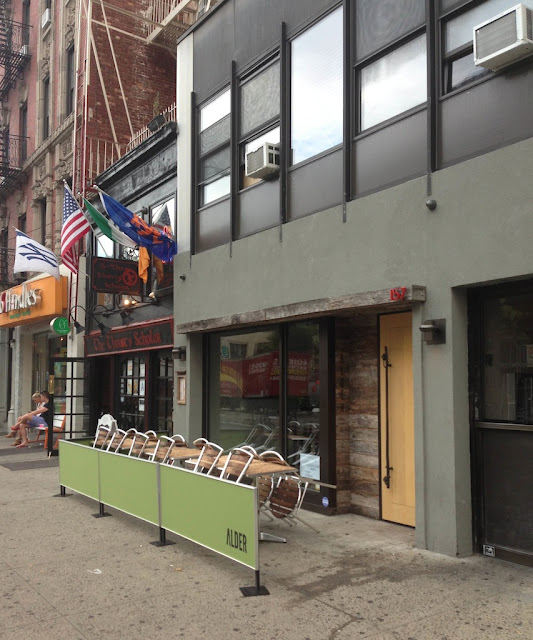 CB3 signed off on a sidewalk cafe for Alder on Second Avenue back in June... and we just noticed that it's now up (well, sort of — the restaurant wasn't open for the day when this photo was taken...)

The eight-table, 16-seat patio made its debut on Friday...

Our patio opens tonight! Come by and enjoy the weather! pic.twitter.com/7KjEHkTHHH

The restaurant from noted LES chef Wylie Dufresne opened on Second Avenue near East 10th Street in late March.
Posted by Grieve at 5:20 AM

I walked by last night. With only three tables on the filthy sidewalk, the diners looked like game show judges minus the game show. Totally absurd.

This is all fine and good but what about DBGB's outdoor seating???

I'm somewhat interested by this place, although I don't think they cater to vegetarians at all (in that weird macho celebrity chef manner).
We walked past on Saturday and it was completely filled with young Wall St Douchebags and their trophy wives/girlfriends - so I guess no place for someone like me (and you)

I love dining in the gutter. It makes me feel like a pigeon.

I second that. Who are these assholes willing to eat outside on the disgusting sidewalk with all the traffic and drunks? What next, a Holland Tunnel cafe? Really people...

I like the giant puke stain in front of the door! What's this place called? Touch 'O Class!

Food is exceptional. Plenty of open tables at bar and outdoors on a warm Tuesday night. The $9 Provencal rose was perfect. Who even looks at the sidewalk?

Who looks at the sidewalk? Hard not to when its covered in gum blobs and puke stains.

@10:45 The hostess needs something to do since there are so many empty tables as she says.

Not the Alder Tables said...

We regret to inform you that outdoor seating is not available tonight.

We hope to bring the seating area back tomorrow night so you can dine on the gum blobs and puke stains as you've grown accustomed to.

Thank you for your patience.

Not the Alder Tables said...

We are pleased to inform you that we have returned the awkward seating area to the sidewalk this evening.

Please join us and enjoy a $90 beet appetizer while the 16 Handles patrons repeatedly shreik "OH MY GOD!" three steps to your left.

Passed by earlier in the evening and indeed the seating looks peculiar. Not unlike the kids table at Christmas.

I usually let out an air biscuit whenever I pass by a sidewalk trendeatery tables with pretentious foodies in them, as away of welcoming them to the neighborhood.