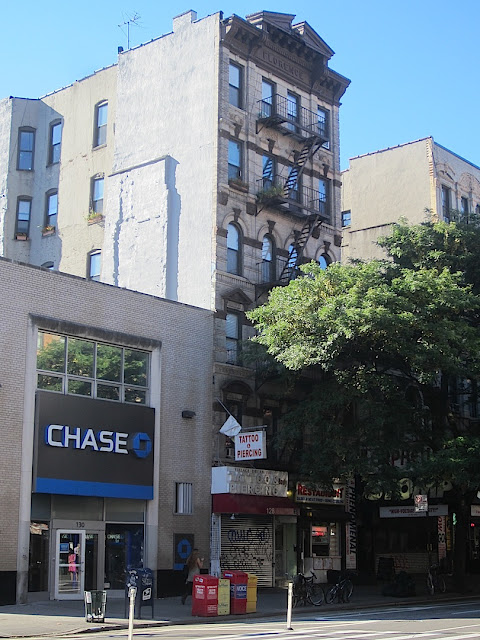 There is talk about 128 Second Ave. near St. Mark's Place. Word is the building is in contract... A resident with knowledge of the situation here said that the building is being sold "to a group of four relatively young guys" ... who were heard "talking about 'clearing out' the shop in the front — which is the Stage." 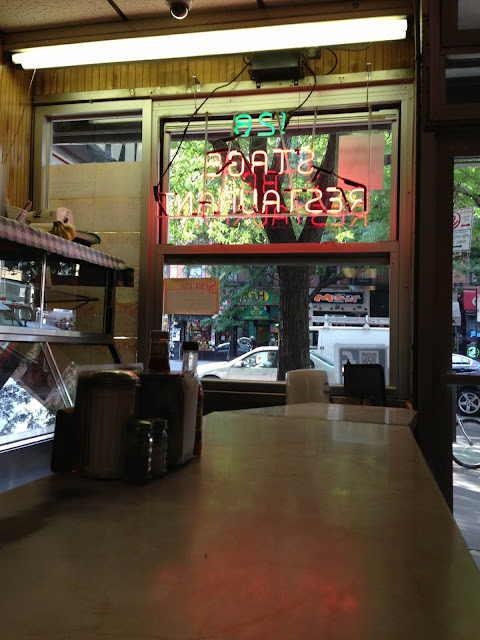 The Stage has been serving delicious and inexpensive Eastern European cuisine since 1980... While all this is far from official, the resident remains worried. "I can't stand another one of our wonderful places going down." And if you're a Stage fan, then the resident figures it's time to show them some more love. 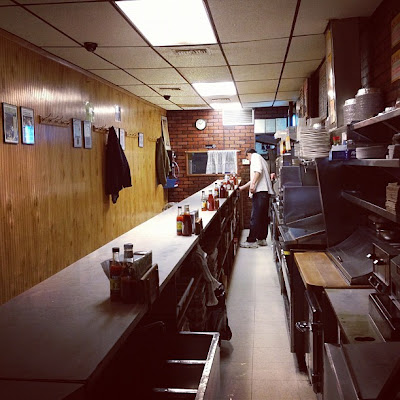 Previously on EV Grieve:
An appreciation: Breakfast at Stage
Posted by Grieve at 6:00 AM

Email ThisBlogThis!Share to TwitterShare to FacebookShare to Pinterest
Labels: 128 Second Ave., the Stage

For what? ANOTHER fro-yo shop or "concept" restaurant? These people scooping up properties as investments are severely altering the fabric of this city in a terrible way.

Time to name names and beat the shit out of these carpetbaggers who are destroying our city. Its time for self defense. the Stage is the line andthey crossed it.

Is the retail market really that hot in the area? What kind of business are the buyers expecting to replace this? Some hipster-yuppie store that will go out of business in a year anyway? It's not like it's a large space that can be rented to a corporate chain or something. That is, if this rumor is true.

What do you expect? All people like that see is "old" -- "junk" -- "nobodies" -- these are the same people who blast around town in SUVs, race to the Hamptons on the weekends, etc.

Honestly, our love of the East Village and what it was is being removed from us at every turn. Moving from my 22-year home (with real neighbors) into another building with nothing but turnover has been a real eye-opener... the attitudes, snobbery, lack of respect, is par for this new course and nothing like the EV I first came to in 1979.

I often think of moving to a place that values the past and respects its elders more than this place...I'm not sure that exists in NY any more.

Young guys...who are these gentleman I ask? Make your names known young ones...

What's the lease situation for Stage?

beating people up is just talk. letting off steam like that makes us feel better, but changes nothing. stopping stuff like this requires political involvement, but that takes a lot more time and effort than talking here. laws would have to be changed, and that ain't easy.

NO, its not talk pal, get the names for us, would you? Out these scum carpetbaggers. Then we can find out where their children hang out so the children can understand their parents are violent monsters destroying our way of life, simple terrorists with bank accounts. Maybe if there were consequences to be domestic terrorists, it would stop. We have enough laws.

Ooh, scary internet badass! Threatening to beat up people who haven't done anything illegal speaks volumes about your character. You want to do something, do it the right way. All you're doing is making your "side" look stupid.

Went to Stage for breakfast - Roman confirmed the building has been sold. I said something like "hope you have a 30 year lease" and didn't get much of a response. Did he own the building? Stage is always so busy...

This is my favorite place. If anything happens to it, more than my heart will be broken.

HOLY FUCKING SHIT THIS IS THE WORST NEWS I HAVE EVER READ ON EV GRIEVE.

is home style cooking dead?
does the future = boston market?

I know nothing is permanent, everything is temporary etc. but this one really hits me where it hurts. Ouch

Sometimes it really hits where it hurts. I know things change etc. but I love this place so much.

Maybe they meant the tattoo place? Do people refer to restaurants as "shops"?

lets chip in and buy the building

He's clearly scared you. Also, I agree with him. The names of the property owners and developers doing this should be published and spread. People should see consequences for actions of short term greed that damages local communities.

I think that if people didn't frequent the fro-yo and other nonsense services moving into these once beloved shops, they couldn't survive and the rents the new (and old) landlords are drooling over would no longer be the catalyst for this type of "change". Change can be good, but this recent hyper-gentrification of all parts of the village must have some limit. You can't stop a person from going about his legal business, but maybe its time to start the boycotts. Stop feeding the beast and support the places that need it most.

What???? This is horrible news. Sitting at the Stage counter is one of the best spots to be in the city. It always makes me think of my first days in New York ... a wonderful place.

You bitches want to defend your home, I'll show you how, but it takes balls, no fuckin wimpy picket lines here. Drop me a lineWSB730@hmamail.com Don't message me if your not down to scrap.

we need to find out who these clowns are. hopefully, they just mean that crummy little headshop.

Losing Stage to new owners, who will probably rent the place to some trendy business, would be a big mistake. I've seen too many places having to leave, only to see the new businesses leaving cause they couldn't make it. I hope the new owners will consider keeping Stage as an establishment worth holding on to. Closing Stage would be the wrong thing to do. Where else could the elderly go for a big dinner & take home leftovers for lunch the next day. Hold on to this place as an icon to the community.