[Updated] After 33 years, Odessa Cafe and Bar closes for good now on Aug. 31 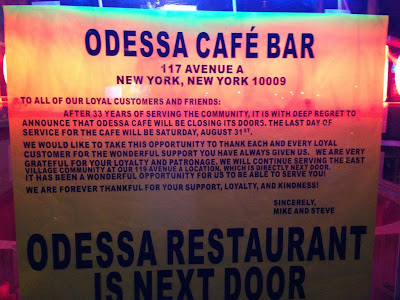 There have been several closing dates for the Odessa Cafe and Bar at 117 Avenue A — first Aug. 15 then Sept. 6. There's now a new date — Aug. 31. And there's a sign up thanking patrons for their years of support.

The Odessa's assets were sold to new operators. (We don't have specifics on the incoming place, though CB3 documents described it as "a full-service American brasserie restaurant.") The Odessa Restaurant next door at 119 will remain open.

Reader report: Odessa Cafe and Bar will remain open through Sept. 6
Posted by Grieve at 10:32 AM

Are they open on Sunday, Monday, or Tuesday? I will be unable to go pay my respects after that. I first went there when I was a child when my mother and I moved to the neighborhood in 1981. There used to be an elderly couple we often saw there. He was American and she was Asian. We always wondered if they had met during WW2 and fallen in love and the East Village was the place they felt most at home as an interracial couple after the war. They always look at each other so sweetly. Oh yeah, the big guy at the register who would boom "chekin' out, chekin' out" when the place was crowded.

Was an institution for a long time. Unfortunately has not served a decent meal since 2005. Goodbye.

Kind of like CB's going - lots of fond memories, but it's been a museum for years. Whatever replaces it will be worse, though.