Last call for the Odessa Cafe and Bar tonight 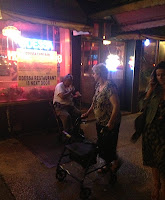 As we've been reporting, the Odessa Cafe and Bar at 117 Avenue A signs off for good tonight. Odessa co-owner Mike Skulikidis has been running the place since 1980. (The Odessa dates here to 1965.)

Skulikidis tells DNAinfo's Serena Solomon that he was hit with a 50 percent rent hike. (Current rent is $10,000 a month.) He will continue to operate the Odessa Restaurant next door.

But he sounds less than optimistic about the future.

Looking ahead, Skulikidis plans to continue working at Odessa seven days a week and said he has no interest in closing it or making major changes — but eventually he will have to move on.

"Everything is for sale at the right price anytime," he said.

Reader report: Odessa Cafe and Bar will remain open through Sept. 6
Posted by Grieve at 7:30 AM

"Everything is for sale at the right price anytime," he said.

You realize this is in reference to the owner of Odessa selling his building (and therefore his restaurant) if he gets a good enough offer, right?

Sounds pretty optimistic to me (at least for Skulikidis' bank account)...