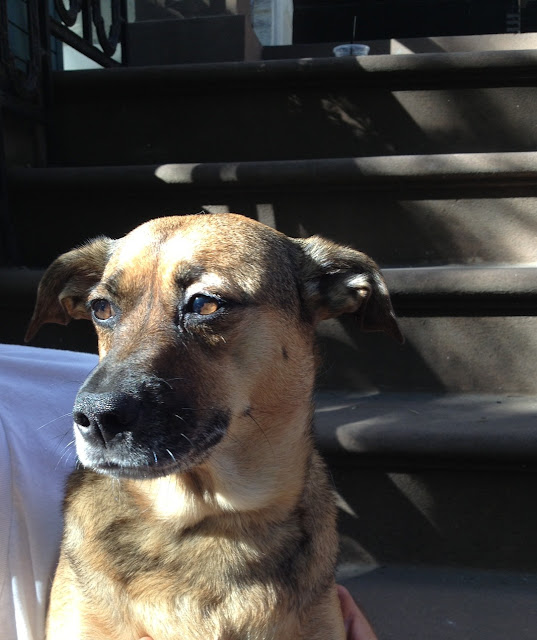 The latest from the NYC mayoral race.

We’ve been anxiously awaiting the moment when Kita the Wonder Dog of East 10th Street is ready to divulge which Mayoral candidate she is throwing her considerable weight behind.

She’s been wooed by all the major candidates as she seems to have her paws on the pulse of the neighborhood. The last time she voted here it was just after Superstorm Sandy and the lines were incredibly long so she’s hoping for smoother sailing this time.

She carefully considered all the candidates; briefly thought of supporting the former Congressman because she thought Weiner was a breed of dog. Another leading candidate behaves a bit too much like an attack dog so that put her off needless to say. Finally she’s informed us she’s supporting Bill De Blasio. Apparently she’s become quite chummy with him and his entire family.

Kita won't confirm for sure but we have an inkling that De Blasio promised his first act as Mayor will be to ban 7-11s and Yorkies named Max so that’s what finally won her over.

Kita looks forward to seeing everyone at the polls on September 10.

Our voting laws are anti-canine. We must allow paw-print registration, and voting by licking a candidate on the cheek.

I know, everyone hates it when celebrities get involved in politics, but turning midtown into a giant dog park is an important issue, and...WAIT...A BIRD!

DeBlasio is in the pocket of Bruce Ratner and Alan Lapes. He's the good cop to Quinn's bad cop. Add to that DeBlasio's position on the BDS controversy at Brooklyn College - why would anyone support him? All the people who lined up to support Obama are now lining up to support DeBlasio, and I guess they'll all be just as surprised when he disappoints them.

It took me a while to see Kita on the de Blasio family photo; nice job!

How about a "follow" BIRD Kita? Would be great to get tweets from you!Love your politics!

Better to boycott 7-11 then use the power of the criminal entity known as "government" to force it out of business. It's voluntary action vs. coercive force.

Which billionaire lapdog will be the best lapdog

Does Kita have any thoughts on Stop & Frisky?

Hey SHMNYC there are some of us who are disapointed by Obama because we know that no person can solve every problem. And also are pretty stoked about being able to get affordable health insurance for the first time in 15 years.

Kita's such a responsible and informed citizen, I'm starting to feel a little bad about myself!

Stop and sniff.
It's colorblind.
Stop and top is sexist!

@ Bill the libertarian anarchist: the 711 on A targets only non-local foot traffic coming to the bars on A. So local boycott will be 100% useless.

Go Kita!! If this endorsement doesn't get BDB elected, nothing will ;)

rob,
That's pure conjecture (that 7-Eleven targets non-local foot traffic), and it's not even reasonable conjecture. It'll be people in the neighborhood who shop there, watch and see.

If you live in this neighborhood, and your path home takes you across St Mark's Place, or through the Bowery near Houston, you know that nobody local ever steps foot in the 7/11's there. It is all crusties, and tourists, and homeless... There is no question that the 7/11's in this area are not frequented by locals... It isn't even a political stance, it is just that they are completely unappealing and the selection of merchandise is not even remotely what anyone in this area wants to buy... You can go across the street and get stuff that the bodega owners who have b3en around for years know that locals want, so why would anyone go into a 7/11.. not to mention the harsh and unflattering lighting....

I second Anonymous' 10:15 PM observation. I have never seen a face I'd recognize in either of those 2 stores...nor in the Subway on First Avenue between 6th & 7th. (Just my totally unscientific observation.)

Anonymous 10:15,
It's probably true that nobody local walks down St. Marks Place, period. But both of these locations (St. Marks and Bowery/Houston) have something to draw people that a store like 7-Eleven thinks makes it a good location to open. Avenue A and 11th doesn't. The only draw would be bars. So the argument is made that the crowd that comes down on weekends between 10pm and 4am, twice a week, will be the prime clientele, and will be great enough to justify opening a store there. It doesn't make sense.
What's happening is that those who oppose 7-Eleven have expanded their attack to include the customers of the store. It's a function of their localist ideology. Anyone who shops there cannot be part of the "community" because no one in the community would ever shop there.

Cigarettes, sodas an dog food... all cheaper. So unfortunately @10:15, the demographic is significantly wider... students, bridge and tunnels and alas the local smokers on their way to and from the subway. Ave A location will indeed be a test case as it's not a key 7-11 clientele thorough fare. Now getting back on point, I'm sure Kita's owners would never step foot in the place!

Kita doesn't really have "owners' in the classic sense, rather she owns our hearts. she stole them fair and square the day she arrived from the shelter. Kita confirms that no one from our family will ever set foot in the impending 7-11. She is also surprised, shocked really, that while everyone seems so mired in discussing the 7-11, she herself is much more concerned with various reports about neighborhood Yorkies named Max which she considers a much greater threat to our quality of life. She continues to encourage everyone to vote early and often on September 10.

shm -- The Thurs-Sat bars are a target but barflies are not the only non-local foot traffic on A. To put it in perspective, if the locals on 11th btwn A&B boycotted the bodega in the middle of the block on 11th btwn A&B, it'd close pretty quickly. It serves virtually only that street. If the locals within a block radius of the 711 corner boycotted the 711, it would make little difference. That's why 711 chose the avenue.

@ Bill the libertarian anarchist -- Highly sustainable, successful local small commerce can still be pushed out of business by giant capital through monopolisitic means. That push has additional consequences for surrounding rents and consumer trends, so it spirals into wholesale neighborhood transformation. Look at the meat packing district.

Kita definitely frowns on pet food purchased at 7-11. She's not down with that at all We have many quality locally owned options that sell nutritious and delicious food.

??shm - Yes, that's exactly why chains choose avenue locations -- they draw non-local foot traffic to, among other things, bars. And A is also a conduit to the park form outside.

But even if "local" were expanded from 11th Street to the entire EV, I'm not sure a boycott would make a dent unless it included the students, who are nebulously and only ephemerally local, and are certainly bar patrons.

But I don't see that NO711 has that reach anyway. Chains don't have immediate personal impact of say a bar. Residents can't adjust to a noisy bar. The persistent noise makes them angrier over time. They complain and organize, and the law sanctions their complaints.

But chains? There are no such sanctions and no persistent tortures. Locals adjust.

Chains don't rise to the level of instigating NIMBY action. It's more like IPNIMBYBICF "I prefer not in my back yard, but I can forget."