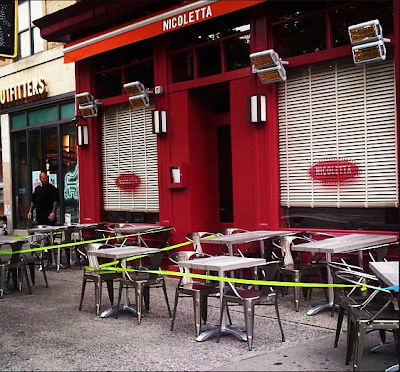 News of its arrival was met with some instant disapproval around here.

Via Jeremiah Moss: "Here comes yet another fucking upscale pizzeria for the East Village, where there have always been plenty of good, cheap pizza places."

Some readers were tuned off by Nicoletta's T.G.I. Fridaysish interior and clipboard-toting hostesses standing guard by the door while keeping tabs on those early are-you-fucking-kidding-me 90-minute waits ... and some reviews were quite unkind, such as the 0 stars the Times dropped on it.

Fast forward to now... Eater put Nicoletta on its Deathwatch yesterday... Eater figures that White and partner Ahmass Fakahany will close the place and turn it into another concept from their Altamarea Group's restaurant arsenal.

Nicoletta means well. On a recent Tuesday night, Team Eater had excellent chicken wings, passable fritti, an okay pizza, and slam-dunk ice cream sundaes. The service was great and the tab was low, but the restaurant was as quiet as a tomb.

The question is not whether Nicoletta will close, but when. The safe bet is that Altamarea will revamp the restaurant once the D.C. outpost of Nicoletta is off the ground. After that, White and Fakahany might re-think this space and give the neighborhood something that it will really embrace.

Previous Nicoletta posts have produced some negative Nicoletta comments. I've never been here... Perhaps you have? Does death become it?

Previously on EV Grieve:
Nicoletta product placement or just trash?
Posted by Grieve at 5:20 AM

Email ThisBlogThis!Share to TwitterShare to FacebookShare to Pinterest
Labels: Nicoletta

The previous restaurant (Centocette) was a go to place for us when meeting with friends, but maybe not hipper than thou enough for the "vanity plate" EV.

I never felt welcome to step in the door of this iteration, feel the same way about their new neighbors, and yes, still miss Telephone...

It must be time to move to New Jersey. Or Amsterdam.

Centocette was a great little place. It wasn't pretentious. They didn't come armed with clipboards or $25 pizzas or "concepts," it was just good Italian food. Imagine!

Funny how I never thought much of Cafe Centocette at the time, but now I would welcome that back in a second.

I just can't imagine how a "Midwestern-style pizzeria" could possible fail.

Centocette frequently went here for years especially outdoor cafe...Never stepped foot in this place for 2nd ave spot now I go to Numero 28 up the block

The pies are very good, if a touch pricey (like everything else anymore). Not sure how they're Midwestern, though. Are they even square-cut? Tasty, anyway. I wasn't a frequent diner there -- my kid prefers Two Boots and Gruppo on pizza nights -- but I'm sad it's not making it. As with Veloce, it was nice to have something different from the Neapolitan and slice joint monoculture

I never understood why Nicorette existed. Centosette was a warm and welcoming neighborhood place, even after they moved here from the original 3rd Avenue space they felt like they'd been there for a hundred years. The owners were great, these new owners almost act like they're afraid to be a part of the neighborhood, and for good reason. Nicorerette feels like a bad piece of artificiality dropped here by aliens, like something out of a Las Vegas casino or Rodeo Drive.

Nicorette feels like it doesn't belong here and I hope they replace it with something that does, but since the owners seem intent on gouging people with concept foods, maybe they can take over the floundering Empire Bisquit and find out quickly that the EV is probably not the right place to test out your cute little franchise concept, because we mostly avoid franchises, and we really don't appreciate being gouged.

Since when do New Yorkers need the velvet rope treatment, premium pricing and lack of respect for what was there before for a high concept, overpriced pizza? Plus they likely forced the early closing of another perfectly good pizza place which was just across the street. Either that or the neigborhood is rejecting pricey pizza which is mostly engineered for food bloggers and not for real people.

I'll stick to St Marks, Grimaldis, John's and Joe's Pizza, even some of the dollar pizza is okay when you're hungry. But I doubt these guys would sell anything besides their souls for only a dollar!

Like other posters, this wasn't a welcoming place. What's the point of that? If anything, a pizza joint should be welcoming. I like the pies at Numero28 up the street.

I grew up in my granny's pizza parlor in Cleveland. And while that was a very long time ago, the Nicoletta pies indeed make the tastebuds happy and nostalgic.... especially the broccoli rabe topping! But that said, there's nothing mid-western about the price and pretense. Agreed... Cafe Centocette was infinitely more inviting.

Isn't this becoming the new trend in restaurants - allegedly name chefs open a new place, and if the reviews are tepid, they start work on a new place, and 6 months later close the old one? Rinse and repeat until you get great reviews at one.

In the meantime, they run local, longtime restaurants out of the neighborhood, and leave behind boarded up storefronts. Curses Top Chef!

Well, at least it keeps the bloggers busy. And I, too, miss Telephone.

i know i'm in the minority but i liked it. easy for a group. liked the crust. liked the sauce (which the rest of my family found too sweet -- maybe that's midwestern?). liked that they had their very own tasty beer made just for them by lakefront brewery in my husband's ancestral homeland of MKE. we had some good servers and some too-cool-for-school servers. upshot: i won't be too torn up by its passing, but i didn't think it sucked. (and i didn't think centosette was all that -- it too was fine. cheaper. which yes, is valid. but i think there's some revisionist history going on here.)

Hell, if we're being nostalgic, bring back Bottom Line, a privately owned friendly drug store that occupied that space in the 90's. Nicoletta is Michael White's lab for a chain. In the East Village? That's just plain weird.

Bottom Line was a Village music venue. Rock Bottom was the drug store.

Speaking of Vampire Biscuits, is there an update on their biscuitorium?

love seeing this fail. get out and take all the FroYo places with ya.

The pizza wasn't that good. Motorino is the best and Numero 28 is great too, but too expensive.

I talked to the guy who owns Plump Dumpling and he predicted it closing months ago. He did a simple rent/expense calculation in his head. The guy knows his business. There's no way with the rent they were paying and how many people they had working there that they could stay open with hardly anyone going in there anymore.

The drugstore was also called the Bottom Line.

I never, ever went to Cafe Centosette, at either location.

To tell you the truth, I have no patience with food establishments that don't have any sensitivity to their patrons in mind. Case in point: the places you go to get a coffee, and ask if they have soymilk [at the very least] and the guy at the counter answers, "We have skim milk"—thinking the problem is calories, not potential allergies.

None of these goddamned fro-yo chains offer dairy-free yogurt, so they can all go ƒüç∞ themselves as far as I'm concerned.

Of course, the only places in the neighborhood I can get pizza are Café Viva at 2nd and 12th, Two Boots at 3rd and A, and Palà on Allen right below Houston.

Bottom Line Discount was at 2nd avenue and 10th street; it wasn't Alan Pepper's late lamented club, but it was far better than any of the pizzerias that have been there since.

I still have the digital clock I bought at the Bottom Line in 1995 (I lived right across the street, above the 2nd Ave Deli). The store (BL) was weird and wonderful, just like the neighborhood back then. Hookers still worked the corner of 11th St. and 2nd Ave and there was this fantastic/interesting looking transexual that used to parade the streets with a frilly parasol on sunny days. I mourn for that area now, it's nothing but frat bars. Who cares about some trendy chef's pizza place? I'm sure something just as terrible/uninteresting will replace it. I, also, like many here, miss "Telephone".

Empire Biscuit. The place is still under construction and still looks more like a store demolition than a buildout. They haven't tweeted or facebooked for over 3 weeks. It's hard to call it a deathwatch since it never came to life, but I think a GrieveWatch is appropriate at this time. Maybe they should do a Biscuit Moblle instead and find out what customers really want in a biscuit.

The new Joes Pizza on 14th St. It's just not the same great slice as the West Village version, and its not busy enough yet to support the high rent. Maybe Naked Pizza which was the last place to try and fail in this space just picked the wrong block, which is mostly people rushing to or from the subway, their NYU dorm, or Trader Joes.

India Row. Most of the original Indian restaurants on 6th Street have already closed, and what's left isn't very good with the exception of Haveli on 2nd Avenue. It's remarkable that in the middle of both India and China becoming world powers that NYC has lost its taste for Indian and Chinese food. Or maybe we only like the food from countries we feel sorry for or want to move to, like Thailand, Cuba and Ethiopia?

Neptune on 1st Ave between. 11-12th St. Great Polish food and service, but you can always get a table because it's almost always empty. The garden out back is great when it's warm outside, but otherwise this looks like the next Odessa, Kiev, Christine's and other eastern Europeans that have closed.

Japadog. Now that Papaya King is open on St Marks Place you can get hotdogs and veggie dogs with fancy toppings for half the price, it will be interesting to see if this Japadog has any fight left in it. It's mostly empty, and they have even resorted to giving away free samples, something Papaya King never had to do.

Tim Hortons. The Canadian version of this huge chain is very decent, but the NY outposts mostly suffer from trying to be too much like Dunkin Donuts, which is why they are pretty much gone already.

The Bodegas. The national chains like 7-11 are eating their lunch due to the buying power they have and lower costs. If the curent trnd continues, most bodegas will be gone in the next 10 years. If only bodegas had managed to get rid of that awful musty-sweet smell they always seem to have, a combination of King Pine soaked wooden floors and rotting bananas, they might have had a chance.

...we tried Joe's recently. Loved the slice, and hope it stays around for a while.

Neptune garden is a great place in the summer, but don't tell everyone, just the cool people, please.

The only place where one can grieve an old drugstore with hookers & trannies guarding its corners would be right here. <3 <3 3>