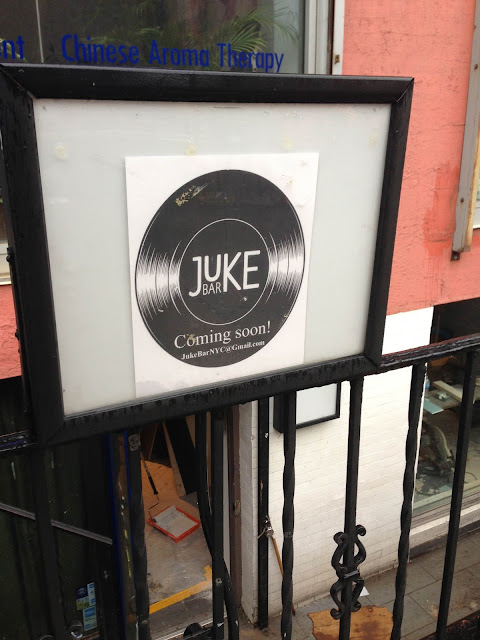 Blue Owl, the 7-year-old cocktail lounge on Second Avenue near East 12th Street, closed earlier in the summer... and there's a new venture for the basement space.

Serena Solomon at DNAinfo has the scoop on Juke Bar, which "will feature DJ's spinning different genres each night, including jazz, blues and R&B, and will serve small plates inspired by Southern cooking."

"Historically juke joints were where my people could go and drink and play music," said Juke Bar co-owner Daniel Glover, 38, whose mother is French Armenian and whose father is an African American from South Carolina. "They were these dark places, but with a lot of life."

Looking hard for a drive-in, searching for a corner cafe
Where hamburgers sizzle on an open grill night and day
Yeah, and a juke-box jumping with records like in the U.S.A...

daniel, i think you need to clarify your definition of juke joint. it used to be (and still is, in some parts) that musicians would come in with their musical instruments and create (a.k.a. "play") music. it was a unique and interactive experience, especially in places where good musicians abounded (although they were mostly in the south, nyc would do) and, when done well and promoted to some degree would attract an appreciative and loyal audience.

so, instead of hiring some kid with a laptop, cracked software, and bootlegged mp3s to "play" music, i would like to encourage you to try to bring some of that actual experience to this neighborhood and not just be another gold miner seeking to capitalize on the name recognition of something that was great and vital.