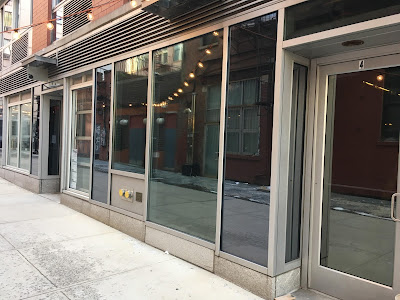 ICYMI: Back on Monday, Michelin announced its 2020 Starred Selections for New York City restaurants ... for the 15th edition of the "Michelin Guide New York City and Westchester County."

Five East Village restaurants are on the list of selections, including for the first time — Ukiyo at 239 E. Fifth St. between Second Avenue and Cooper Square.

Here's what Michelin had to say about the place from the wife-and-husband team behind fellow Michelin-starred Jewel Bako: "This lovely counter run by Chef Marco Prins is a delight for its high-quality ingredients and impeccable seasoning."

Meanwhile, Kyo Ya, 94 E. Seventh St. between Avenue A and First Avenue, was dropped from the list. Chikara Sono, their longtime chef, left at the end of March.

Michelin released the list of Bib Gourmands last week.
Posted by Grieve at 4:05 AM

Email ThisBlogThis!Share to TwitterShare to FacebookShare to Pinterest
Labels: Michelin