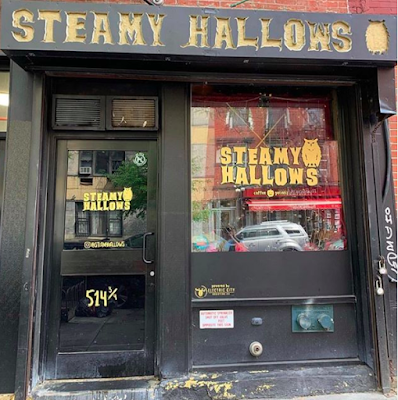 Steamy Hallows, the Harry Potter-themed coffee and dessert shop at 514 E. Sixth St. between Avenue A and Avenue B, closes after service tomorrow (Oct. 31).

According to the Steamy Hallows Instagram account, the owners couldn't come to an agreement with the landlord on a new lease. The more recent Steamy Hallows outpost in Kingston, Pa. remains open.

This was the latest venture from Zach Neil, the pop-up theme bar entrepreneur behind Beetle House on Sixth Street as well as the now-closed Will Ferrell bar Stay Classy on the LES and the short-lived 'Merica NYC on Sixth Street.

Steamy Hallows debuted in February in space that briefly housed Cake Shake, the extreme milk-shake shop that debuted in August 2018.
Posted by Grieve at 4:00 AM

LOL. This place actually lasted longer than I predicted. Next!

It was nice to have a coffee shop on 6th street––I hope a more conventional one could open in the space.

I never even knew about this place—probably just as well.