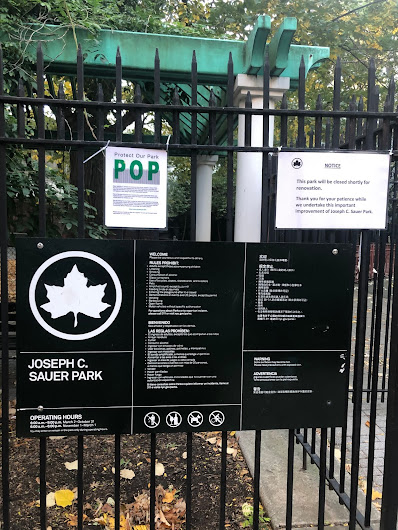 When renovations are complete at the Joseph C. Sauer Park on 12th Street later next year, the fence outside the property will remain the same height.

As previously reported, while the $4 million redesign of the Park was welcome, local residents were unhappy with the Parks Department's plan to install a 4-foot fence here between Avenue A and Avenue B. According to a petition that was in circulation, the shorter fence would "make the park less secure and an unsafe place for children to use."

However, on Friday, local Assemblymember Harvey Epstein and City Councilmember Carlina Rivera announced a deal with the city that would keep the fence at 8 feet.

In a joint statement, they said:

"We are proud to stand with the community and parks advocates who persisted in asking that the Parks Department recognize the safety needs at Joseph Sauer Playground. We are excited to announce that because of this collective effort, the Parks Department has agreed to keep the playground’s fencing at its current 8-foot height as part of the upcoming renovation. The voices of New Yorkers who use local parks every day must be heard when we decide how our capital dollars are spent, and we want to thank Commissioner Mitchell Silver and the Parks team for listening and addressing those concerns in this instance."

The renovations — part of Mayor de Blasio’s Community Parks Initiative — are expected to start this month, with a completion date in October 2020.

Here's a look the renovations to come... 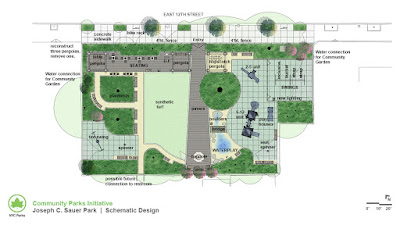 Great news! Now let's get the city to listen to the community about saving East River Park! https://www.change.org/p/mayor-bill-de-blasio-save-east-river-park-urge-nyc-to-develop-a-resilient-plan-with-consensus-from-community?recruiter=1005757590&utm_source=share_petition&utm_medium=copylink&utm_campaign=share_petition

As a member of the 12th St Block Association I would like to thank EV Grieve for providing a place for people of the E Village to voice ideas and stories which keep us all up to date on the many challenges we our neighborhood faces. We would also like to thank its readers for signing our petition POP / Protect Our Park, when we work together we can make a difference.

Much gratitude to Harvey Epstein and Carolina Rivera for amplify our concerns about the plan to change the park's fence and lastly thank you to Park Department and it's commissionor Mitchel Silver, we look forward to a beautifully rejuvenated Josef Sauer Park.

great news! thanks to all who put together the petition and kept pushing for this!

It's another small but consequential victory for the people of the EV. It's a sad commentary on how dumb and unprepared Death-of-the-City de Blasio's appointments are in terms of the communities they are supposed to serve. ONE PARTY RULE. ONE PARTY RULE.